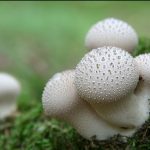 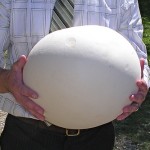 OTHER NAMES: Devils Snuffbox, Chicken of the Woods

HABITAT: Puffballs flourish in areas such as lawns, meadows, tundra and roadsides.  Puffballs can be found from Alaska to California, and many North American Hard and Softwood Forest’s. There was even a Calvatia species discovered in Brazil in 2008

DESCRIPTION: Puffballs vary in size from the size of marbles to basketballs.  THe Lycoperdon sp. are smaller, but more abundant.  Lycoperdon is round and white before the spores develop and turn brown as they begin to ‘fruit’ and are ready to release the spores.  Calvatia sp. can be larger such as the C. Gigantea specieas and can grow to 10 inches in diameter.  They have numerous ‘cracks’ that release the spores.  Calvatia sp. are round to pear shaped and lack a true stem, but some have a “stalk-like” base that varies from the minute to substantial.  The fruiting bodies of the Calvatia may be smooth or with wartlike growths.  When both species ‘fruit’, they release a cloud of spores when stepped on. 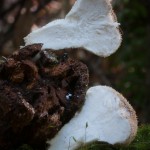 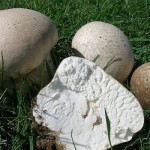 Large puffballs can be a very delicious if you slice them and cook them like eggplant Parmesan.  You can also try them filled with stuffing, wrapped in bacon and cooked in a covered pot.  The smaller puffballs can be sauteed in butter, garlic and soy sauce and served on toast points.

You can basically use these just like you would any mushrooms you buy in the store.   They can be added to sparser meals to help fill the belly and give the meal more variety.

This is an unverified source, but the nutritional content according to a study done in Turkey found that Lycoperdon perlatum contained

Puffballs have been traditionaly bound to wounds to stop bleeding, spores have been inhaled for a folk remedy for nosebleeds.

The spores have been known to cause allergic reactions in some people and severely irritate the bronchial passages, so caution must be used when considering traditional uses.

As with any foraging for new species be very careful in the collection.  For you first time always collect the “unknowns” and keep them in separate containers from the “known” edibles, so if they turn out to be inedible they don’t spoil the rest.  This is because Spores form one mushroom that may be toxic may spoil the rest if they come in contact.  a rule of thumb is to cut mushroom stems one inch form the ground to make sure they are free of dirt.

For positive identification make mushroom spore prints for future reference.  Discard the step and place the mushroom cap stem side down on paper, cover this with a glass bowl or large container and let it sit overnight.  The paper, if possible, should be half dark half-light so that the spores show up regardless of color.  Spores will form an identifying print, like a finger, with their color and shape, which will be the key identifiers.

Dont eat a large portion when consuming new wild mushrooms for the first time.  Eat no more than a tablespoon of the cooked fungus, wait 36 hours, and if you don’t get sick its ok.  if you do get sick or have an allergic reaction it will, or should be less, than if you ate a heaping portion, and this way you can get the learning curve without the death or severe illness! (this is why you should forage in your area now! not when things get bad and medical attention is less or non-existent).

As with all Foraging, consult your local knowledge base and BE CAREFUL!

Post Collapse Skills – What Do You Bring To The Table?