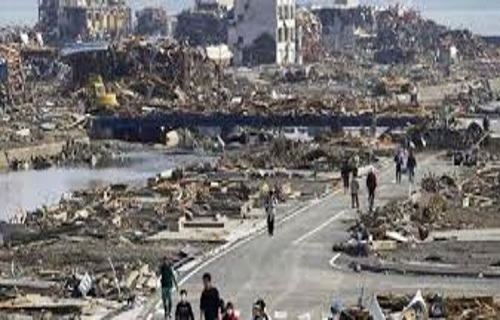 What should you do in case of nuclear attack? Do you have a plan to survive a nuclear war? If you don’t have a clue what supplies you should consider, we’ve put together the top 20 things you absolutely must have to survive a nuclear war and total economic collapse.
Nobody ever wants to experience the devastation caused by nuclear weapons. For decades, the Soviet Union and the United States have built and tested hundreds of different nuclear bombs. With so many nuclear blasts documented with video evidence and after the U.S. bombed Japan, seeing first-hand the devastation, the world clearly doesn’t want to experience it ever again. Fortunately, we’ve avoided all-out nuclear war in the 21st century.
But today, the threat of nuclear war is still very real. Whether in the hands of a small country or a top nation state, nuclear war is something everyone should be prepared for. Much like planning for economic collapse and other events, it’s important to have a plan and supplies in place.

On Feb., the agency’s monthly public health-focused webcast, called Public Health Grand Rounds, is slated to focus on “Public Health Response to a Nuclear Detonation.”
The CDC points out that “while a nuclear detonation is unlikely, it would have devastating results and there would be limited time to take critical protection steps.” However, “planning and preparation can lessen deaths and illnesses,” the CDC says.

“For instance, most people don’t realize that sheltering in place for at least 24 hours is crucial to saving lives and reducing exposure to radiation,” the CDC says.

The presentation will feature speakers including the deputy director and chief medical officer of the agency’s Office of Public Health Preparedness and Response, the radiation safety officer, and the chief of the Radiation Studies Branch.

Topics will include “Preparing for the Unthinkable” and “Roadmap to Radiation Preparedness,” along with information on how public health programs have fared on the local, state and federal level in preparing for a nuclear bomb.

If the recent, worrying update to the Doomsday Clock is anything to go by, we shouldn’t have too long to wait for nuclear annihilation.

On January, the Bulletin of the Atomic Scientists moved the hands of the symbolic Doomsday Clock forward to two minutes to midnight. The Doomsday Clock was devised at the end of World War II and midnight on the clock represents a nuclear disaster or apocalyptic event. The closer the Doomsday Clock moves to midnight, the more real the threat is.
Donald Trump’s proximity to the USA’s arsenal of some 6,800 nuclear warheads moved the clock to two-and-a-half minutes to midnight in 2017. Now, with the stand-off between the US and North Korea escalating, the threat feels even more real and, alongside the ever-present danger of climate change, worsened by irrational decisions made by President Trump, the organisation advanced the clock forward a further thirty seconds for 2018.

This a long way from 1991, where the end of the Cold War meant we were a figurative 17 minutes away.
Most recently, Trump and North Korean leader Kim Jong-un took to state TV/Twitter to boast about the size of their respective nuclear buttons. Kim Jong-un boasted his button was on his desk and he had completed his nuclear arsenal, which led Trump to retaliate with claims his button is “bigger and more powerful.”

North Korea fired a missile over Japan last year, causing emergency alarms to ring out across the country. The missile landed in the sea off Hokkaido and South Korea’s military is said to have fired back in response. The US condemned the test and the UN Security Council met to discuss the ongoing threat.
So, what damage would this one-megaton bomb do? How long is an incomprehensibly destructive piece of string? In short, it depends on a number of factors, including the time of day, the weather, the type of land where it hits, or if it detonates in the air. But there simply isn’t a happy answer to the question, no matter how favourable the conditions.

This so-called “Nuke Map”, created by Alex Wellerstein, gives a more accurate idea. It lets you virtually drop a bomb anywhere in the world and you can select the strength of the bomb in question to see the extent of the damage.

An easy way to remember what to do, i, “Get inside, stay inside, and stay tuned.”A basement, a bathroom, or a room with no windows or one with well-sealed windows will reduce your chances of being exposed to radioactive debris. By contrast, a car isn’t a safe place, unless you don’t have other options.

Radiation levels from the detonation fall off dramatically within a matter of hours, but staying where you are, listening to news reports, and getting information from friends and family outside the area (in the event that you can’t reach anyone in your area) are crucial.

“The plume is all this radioactive debris and can get transported sometimes hundreds of miles downwind. It’s important to know if you’re in the fallout zone,”.

You could spend a few days in a shelter, so recommends preparing a disaster kit or box ahead of time, the way some people do for hurricanes and other natural disasters. Stock it with a few days’ worth of water, non-perishable food, and any prescription medications you’ll need. Keep a hard copy of phone numbers of family and friends who live out of town in case your contacts list dies along with your mobile phone.

Once it seems OK to come out, follow your local emergency advisories. Watch the wind patterns. Steer clear of any radioactive dust and debris. If you’re exposed to any radioactive material, brush it off as soon as possible and take a gentle shower to rinse it off hair and skin.

As depressing as it is to plan for a nuclear disaster, try to stay positive.

There’s a good chance that would be fatal, but not as good a chance as if you were closer to the blast zone itself. The centre of the Hiroshima bomb was estimated to be around 300,000˚C. For perspective, cremations are carried out in furnaces that reach 1,200˚C, so there’s literally no chance of surviving that.

Your chances improve the further out you get, basically, but even if you get serious burns, you may be killed another way before you can be treated. Within a four-mile radius of a one-megaton bomb, blast waves can produce 180 tonnes of force and winds of around 158 miles per hour. That speed reaches 470mph in a half-mile radius. As a human, you might survive that pressure – but you likely wouldn’t survive any nearby buildings collapsing on you.

That’s before we even get on to the radiation poisoning. Radiation of 600 REM has a 90% chance of death. That drops by half when you hit 450 REM, but you’re not out of the woods then, with increased chances of cancer and potential genetic mutations.

But let’s say you’re not anywhere near the blast. You’re safe then, right? Well, not quite. Overlooking the fact that it wouldn’t be a nuclear war without retaliation, radioactive fallout can travel for hundreds of miles. Yes, its effects diminish after a couple of weeks, but that’s a couple of weeks when you’re going to want to stay in your fallout shelter.

I will survive
When civilisation collapses, will you be ready?
AFTER “the Crunch”—the total collapse of the global economy—trade seized up, the power grid shut down and paper money became worthless. Riots gutted city centres. Looters picked them clean. Americans went back to growing their own food and bartering with their neighbours. Those who had failed to stockpile beans and bullets were soon hungry and defenceless. The “Great Die-Off” hit Florida especially hard. Millions of suntanned retirees died of starvation or chronic diseases after the government stopped paying for their pensions and pills.

Better to have a bug-out truck packed, fuelled and ready, so you can drive to a pre-prepared refuge in the countryside.

If you have nowhere to go, you should stay at home. And if so, you’ll need food, water, duct tape, garbage bags and sand (for using as a makeshift toilet). Have a blackout at night, so you don’t give your position away to prowling looters. If a friend comes round, put him in your quarantine room. (Don’t seal if off completely or he’ll find it hard to breathe.)

Gruesome practicalities are confronted frankly. If you need to dispose of a corpse, for example, put plastic sheeting on the bed, wrap the body up, seal it with duct tape, and, if you have nowhere to bury it, leave it on the kerb with the deceased’s name and date of birth written on the bag. (Not his social-security number; that would allow someone to steal the dead man’s identity.)

Should you buy a solar panel that straps to your back so you can charge your phone as you flee the city? Or a “waterbob”: a plastic bag that sits in your bath and can store 100 gallons of water? Should the group club together to buy gas masks more cheaply?
Many American cities have strict gun-control laws, which is frustrating. And urban preppers face other difficulties. “You have to adapt “.

Survivalism has a long history in America. The early settlers were survivalists, though they did not use the term. They built their own houses, grew their own food and filled their stores with whatever supplies they could, knowing that failure to do so might be fatal. The pioneers who trekked out West in the 19th century expected to meet hardship and danger. Those who went well armed and well prepared were more likely to survive.

Survivalists today draw inspiration from the pioneers. They look at modern civilisation, in all its opulence, and see a house of cards. Many have a puritan streak: letting other people grow your food and chop down trees for you is somehow unmanly. Ours is “a pampered, prissified society that doesn’t know how to revert to third-world living standards”.

There is a religious tinge to prepping, too. Americans are more religious than people in other rich countries. Roughly four in ten expect Jesus to return by 2050, and although the Book of Revelation is hardly crystal clear about the details, many think the Second Coming will be preceded by a “Great Tribulation” involving earthquakes, floods, famine, the rise of the Antichrist and the death of most of humanity. Tim LaHaye’s “Left Behind” series of novels about the “End Times” has sold 65m copies. Preachers at the Westboro Baptist Church in Topeka, Kansas, argue that Barack Obama is the Antichrist, implying that the end is very nigh indeed.
When civilisation collapses, he predicts, the world will go back to barter. Buy silver, he advises; gold is too valuable for small transactions. And buy lots of different kinds of ammunition to barter with, because the guy you want to buy petrol or poultry from may not use the same calibre of gun as you do.

If civilisation collapses,i will be ready.