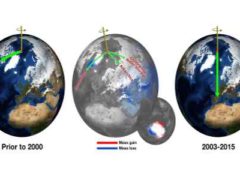 The world is supposed to end tomorrow. That’s according to some people who say the Mayans predicted some things that other people say they didn’t predict. Scientists Now Willing to… Read more »