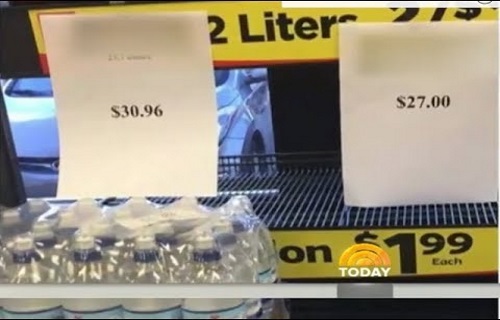 Price gouging by Texas merchants in the path of Hurricane Harvey has drawn the attention of Texas Attorney General Ken Paxton, who said Saturday that his office is looking into such cases.

This article has been written by  Michelle Fox | @MFoxCNBC

There have already been more than 500 complaints about price gouging during Hurricane Harvey over the weekend, Texas Attorney General Ken Paxton told CNBC on Monday.

That includes reports of up to $99 for a case of water, hotels that are tripling or quadrupling their prices and fuel going for $4 to $10 a gallon, he said in an interview with “Closing Bell.”

“These are things you can’t do in Texas,” Paxton said. “There are significant penalties if you price gouge in a crisis like this.”

As for whether there will be a shortage of goods, Paxton said the big retailers are in the process of re-establishing supply chains as quickly as they can.

“I don’t think as large as our country is, as large as Texas is, that supply is ultimately going to be that big of an issue.”

Hurricane Harvey was the most powerful hurricane to strike Texas in more than 50 years when it came ashore on Friday near Corpus Christi. Now a tropical storm, Harvey is expected to remain over the state’s Gulf Coast for the next few days, dropping a year’s worth of rain in about a week, with threats of flooding extending into neighboring Louisiana.

The historic flooding in Houston will likely worsen as federal engineers release water from overflowing reservoirs to keep it from jumping dams and surging uncontrollably into the homes they protect, officials said.

— Reuters contributed to this report.

Don’t wait, start right now because remember, there are no do-over’s in survival. When all the grocery store food is gone, you get to live on what you’ve stockpiled.

This article has been written by Theresa Crouse for Survivopedia

You turn on the faucet and there it is: as much water as you could possibly want. But then, as a prepper, you think, “What about the day when I turn it on and nothing comes out?”

Many people buy bottled water for their stockpile, and that’s fine, but you can also store tap water for survival and it won’t cost you a dime beyond your monthly water bill, if you have one.

There are some precautions that you need to take, but otherwise, turn on the tap, fill your containers, and store away!

Even a few bacteria will quickly travel and multiply in room temperature water. That’s why they say to turn the sink in a public bathroom on and off with a towel. Even if you’re the only one who drank out of the bottle, the contents of the bottle can spoil and contaminate the tap water stored in it and make it undrinkable.

To avoid this, run the containers through the dishwasher using the hot water cycle, or clean them with hot soapy water just like you do your canning jars. It’s important to use containers that are easy to clean and don’t have little nooks and crannies that can harbor bacteria.

It’s important to choose the right container to store your water in. Some people use milk jugs but I wouldn’t recommend it for a number of reasons. They’re relatively flimsy, which makes them easy to puncture.

They’re also difficult to get clean because of the narrow handle. The lids nowadays often pop off. You don’t want a container that’s going to easily leak, and milk jugs are just a flood waiting to happen.

Some containers that are good for storing water include 1- and 2-liter soda bottles, juice jugs, and, if you want to store a larger quantity, 5-gallon food-grade buckets are great. They’re sturdy and stackable. You can also buy the sturdy camping water containers at your local superstore. They’re a bit expensive, but they’ll hold water for years.

Glass containers are always a good option too, though they’re heavy and breakable.

Make sure that all of your plastic containers are BPA-free so that no chemicals will leech into your water. Using opaque containers is good too, because direct sunlight will cause algae and the like to grow, just in case there are any spores at all in your water.

Store Your Water in a Cool Location Out of the Sunlight

Sunlight promotes the growth of pathogens, so store your jugs out of direct sunlight. Sun also breaks down some plastic containers, which is why it’s important to use BPA-free containers. Also, hot water takes up more space than cool water, so you may have a problem with your containers swelling and leaking – especially if you’re a die-hard believer in milk jugs.

Remember that even if your containers are clean when you put the water in them, they’re not sealed so pathogens can still get in.

Add a Few Drops of Bleach

You may be thinking, “Why do I have to worry about this if my containers are clean when I put the water in it?” Well, there are a couple of reasons. Even if your containers are completely sterile when you fill them, they’re probably not completely air-tight, which means that pathogens can still find a way in.

A few drops of bleach will make it a very bad day for any germs that happen to choose your container!

That being said, if the container isn’t airtight, the chlorine will break down and leave it vulnerable to bacteria, which leads us to our next subject.

Water doesn’t go bad, but it can get slightly acidic after a while. That’s because a minuscule percentage of it chemically changes to carbonic acid when it’s exposed to air. This makes it a prime breeding ground for bacteria. Considering that and the fact that bleach or chlorine breaks down, you should probably rotate tap water every six months or so.

This isn’t necessary for commercial water because it’s sealed, but it’s still a good idea to use the FIFO (First In, First Out) method, if for no other reason than to keep in practice.

There used to be expiration dates on commercially bottled water, but the CDC lifted the requirement due to lack of evidence that water goes bad. Remember though, that this water is sealed so that air can’t get in it, and the water and container are both sterile when the water goes in. That’s not the case with tap water.

Empty, clean, and refill your tap water containers at least every six months. Use the water that you’re dumping as grey water to water your plants or whatever.

If you have the room in an extra freezer, store some of your water in there. Frozen water bottles will help keep your frozen food cold longer if you lose power. They’re also great to toss in a cooler in place of messy loose ice, and if you’re heading to the gym or hiking, or anywhere really, a bottle of ice will melt so that you have nice cold water for a few hours instead of drinking it warm.

If you use the small bottles, they’re also great for ice packs.

You may have noticed that I’ve mentioned different size options for your bottles. Why choose just one? You can store large quantities of water (i.e. 5 gallons) for use by the entire family for a day, then store gallons to have on hand to use for cooking or personal use throughout the day, and store individual servings such as water bottles to carry with you on your person.

Having water stored in 5-gallon buckets or 55-gallon drums is great if you’re staying in, but what about if you have to bug out? That’s a danged heavy thing to tote around. Also, that many large water containers will be tough to keep inside and tough to hide outside.

Storing tap water is a perfectly reasonable, safe, cheap way to prepare for disaster. As long as you store it properly and rotate it, there’s no reason why it isn’t every bit as safe as store-bought water. Between it and rainwater, which we show you here how to collect, you can store as much water as you need to survive for at least a while.

Foods to Stock at Home and in Your Disaster Supplies Kit

How To Wax Food For Long-Term Storage