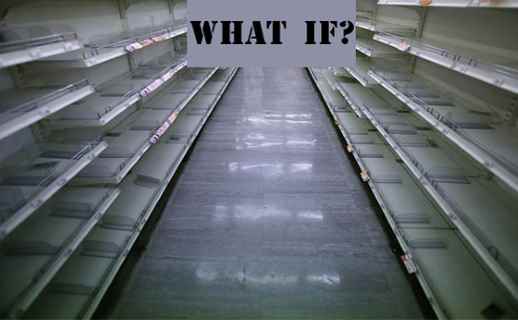 That’s right. And if you think about it – as in, critical thinking, – you will (should) realize the utter devastation that will surely result when the unthinkable happens… a SHTF collapse of our food supply which will kill multi-millions of you.

I only say ‘you’ in reference to the general population. Hopefully ‘you’ reading this are already prepared to some extent, whereas those who are not – will be facing near certain death.

RELATED : One Year In Hell…Surviving a Full SHTF Collapse

I can’t explain why, but for some reason I am able to clearly see many of the systemic risks within our modern way of life. Perhaps it’s simply because I am not a major sufferer of ‘normalcy bias’ and do not accept that any or all of these systems will remain functional forever. Maybe it’s because I do not automatically accept the ‘status quo’. Instead I know that things do change, and sometimes very rapidly for the worse…

I’m sure that many of you too have the uncanny ability to recognize risk – especially those risks which could devolve and ‘domino’ into catastrophic life-altering results… even those which could potentially kill off many, many, millions of us. It has happened before. Why should it not happen again? Particular in today’s modern era where most people literally depend on many various external systems to keep them alive.

RELATED :  Strategic Relocation and How To Survive The Economic Collapse

My recent article, “The US National Grain Reserves Are Apparently Gone” got me to thinking (again) about our dependency upon readily (and affordable) food in the neighborhood grocery stores. ‘What if’ that were no longer the case?

If there were to be a major food disruption in the United States (for example), my instinct tells me that we would suffer worse than a poor ‘3rd-world’ country. They’ve learned how to survive with little. These countries do not have the ‘hand-out’ social programs as in the US. Can you imagine today’s modern ‘facebook’ generation (for example) having to figure out where to get their next meal?

RELATED : If you had 7 days advanced warning before SHTF

Here’s a challenge for you… Without defaulting to the thought process that ‘it could never happen’ or without attempting to rationalize that there are no possible circumstances that could add up to such a disruption, just imagine ‘what if’ the grocery store shelves became ‘thin’ or empty… How much food do you think most average Americans have in their homes?

Based on what I’ve read (and my instincts) I suspect that most urbanites and suburbanites probably don’t have much more than one or maybe two weeks of substantial meals to feed their family. In fact, I really believe that it’s probably worse than that on average. Most of our population now live in cities and suburbia. What do you think these people will do after not having eaten for 3 meals? One thing’s for sure, nearly ALL of them will have a priority to find some food! Now imagine 3 days without food? Now we’re talking about some serious hunger – which is something that most of us have not experienced before. What do you think will happen as a result?

RELATED : Here Are 10 Things Non-Preppers Will Be Forced To Face When TSHTF. (#8 Is REALLY Going To Hit Them Hard!)

Note: I have avoided talking about the water issue, which would be even worse than a lack of food issue…

Have you read “Light’s Out”? That will provide a clue…

Incidentally, there’s a new book out by Ted Koppel (I’m rather shocked that a mainstream media figure is talking about this) which apparently also sounds the alarm. His book is also titled, “Lights Out” (I will be reading this soon).

Why do I say that the majority will die in a food collapse?

Because the majority has no way to procure their own food without ‘money’. And in a situation where there is little or no food to be had, money won’t matter. These people will die.

RELATED : Hydration for the Apocalypse: How to Store Water for Long-Term Emergencies

Within a month we will have a massive die-off of millions upon millions of people.

Would other nations come to our rescue? And if they did, how much affect would it actually have? (Probably not too much). Since I have not described a scenario of the ’cause’ of food supply collapse, it’s impossible to adequately surmise any possible aid. Maybe most of the world has become affected by the collapse…

Not only will people die from starvation, but many will die from the ensuing chaos. Unless you have a vivid imagination, it might be difficult to imagine the potential horror of a city (all the cities) and suburbia without food (or very little food). While people still had their strength, many would become so desperate to feed themselves and their family that they would turn to doing things that were unthinkable before.

Who would survive? Those who might survive will be those who have at least prepared. Those who have thought ahead and planned and/or changed their way of life to one that’s more self-sufficient and self-reliant. Those who may have relocated to a place better suited for such a life. Those who already have the ability and capability to procure their own food. While none of these are a guarantee, at least they are substantial.

Most people will scoff at the notion of a food supply collapse – because it has never happened in their lifetime and is unthinkable. My response would be that although it would take a seemingly unimaginable set of circumstances to affect the general food supply and distribution system in such a way, the fact is that we as a people LITERALLY rely on a stocked neighborhood grocery store to keep us alive. That in and of itself is motivation enough for me to supplement that with a more self-reliant source (or sources).

I’ve rambled on for a thousand words now, and my point is to simply (but horrifically) imagine life without plentifully filled grocery stores. Imagine how many people would perish because of it. Imagine how long (short) it would take for the chaos and starvation to take its toll. And then ask yourself what are you going to do about it…(source)

Food Rationing: It Will Break You Down Mentally

Collapse Reality: “If I Had to Be an Animal, I Was an Animal. It Was About Survival.”