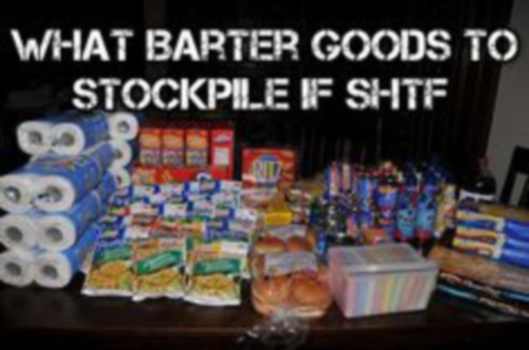 There will be widespread, perhaps even critical, shortages of necessities – food and fuel

In But I Thought It Was Just A “Panic” Karl Denninger discusses how the lies, temporary fixes and fiscal misconduct of our government and the Fed will eventually cause a complete breakdown of the financial system as we know it (emphasis mine):

How long can it continue?

Only until the Asian nations recognize that the consumer can’t “come back” to former levels of consumption, as they’re tapped out. This in turn means they must develop internal consumptive markets for their products, and that in turn means the end of buying our debt as a means of sterilizing their export flows.

When, not if, that happens then entire exponential fraud game comes apart with extreme violence.

We have been given a gift – a six month (up to now) to couple-of-year (maybe) time frame in which to recognize the truth, break up these behemoth organizations, force the bad debt into the open, default it, make depositors whole and in doing so place our economy on a trajectory where debt-to-gdp will shrink to a sustainable level.

If we fail to do so before the rope runs out – and it will – our economy will collapse.The Federal Government will be forced to contract spending to what it can raise via taxes in the current economic climate – about half of what it spends now.Given our budget and where we spend money, this means a near-complete repudiation of Social Security and Medicare, a 50% or more cut to the military budget, and an elimination of all other federal programs. Unemployment will rocket to north of 25%. Our “just in time” economy will break down and there will be widespread, perhaps even critical, shortages of necessities – food and fuel.

For the “preppers” out there, this entire article from Karl Denninger is worthy of a read, as is pretty much every article over at Mr. Denninger’s Market Ticker. Many Most don’t believe it can happen, but it has happened before, and it will happen again. The private and public debt in this country is so high at this point, that it will be impossible for us to pay off. It’s simple mathematics. I have a feeling that the Chinese know this already and are just trying to pull us along for a little while longer while they unload as many US Dollar based assets they can before a complete meltdown in our currency occurs.

While Mr. Denninger still has faith that Congress may come to its’ senses or that a politician or politicians will stand up and lead the way, I have none. Congress has been bought and paid for and could care less what happens to the little guy on the street. In this blogger’s opinion, SHTF is imminent – so plan accordingly.