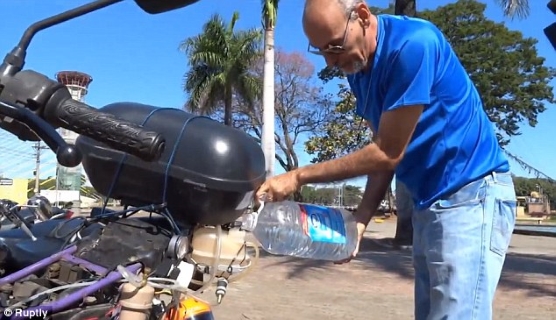 Things They Do not Want You to Know — Motorbike that runs on WATER: 1 liter to travel 500km

A water-powered motorbike with the ability to travel up to 310 miles on a litre of H20 is turning heads in Brazil.

The ‘T Power H20’ motorcycle was created by Sao Paulo-based public officer Ricardo Azevedo and can even be powered on polluted river water.

The design features a combination of water and a single external car battery, which is used to produce electricity and separate hydrogen from the water molecule.

The process, involving a pipe system, results in combustion and it is this that creates the energy necessary to power the bike.

Captured on video, Mr Azevedo demonstrates the brilliance of his invention after first drinking clean water from a bottle to prove that it is indeed H20 and not a form of fuel.

He then sets about filling up before hoping onto his motorbike and hitting the open road.

Later in the video the Brazilian proves how sustainable the bike is by filling up a bottle of water from the polluted Tiete River and running his bike on the filthy H20.

Speaking about the motorcycle, Mr Azevedo also suggested that his creation has environmental benefits too.

He said: ‘The advantage of this motorcycle, which works with the hydrogen that comes from the water, is that the result that comes out of the exhaust is water vapour.

‘This is different from gasoline, which the result is carbon monoxide.’(source)