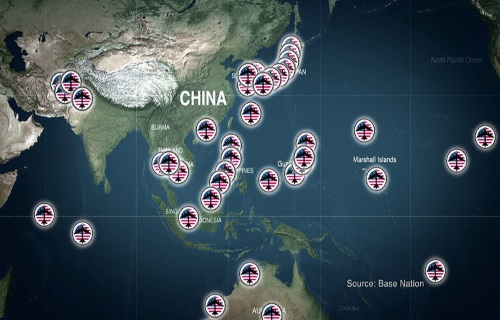 The Coming War with China

The Coming War on China does not engage in lies but it evades the truth so much that it is rendered invisible. (One doesn’t know whether Pilger appreciates his thoughts are often verbatim to what regularly appears in Chinese state television, though he fails to include one single clip from this media instead relying on a montage of American news shows to indicate a warmongering United States.) If, according to Joseph Goebbels, by telling a lie enough times it becomes the truth, then the reverse is also true: by evading the truth enough times it becomes a lie.

Worse, he sees any country allied with the United States as a warmonger. While exploring opposition to U.S. bases in Japan, he criticizes the country’s Prime Minister Shinzo Abe, whose American “patron” has helped stoke Japanese nationalism and to reassert Japanese power. He does the same for South Korea. Just perhaps, however, the Japanese and South Korean governments are reacting to Chinese assertive actions rather than being belligerent on their own accord. As I was told last year by the journalist Bill Hayton, author of The South China Sea: The Struggle for Power in Asia, “the U.S. hasn’t been forcing these countries to ask it to send military equipment and ships. These countries are nervous and are asking the U.S. for reassurance because they perceive a threat from China.”

A fallacy arises here. Pilger descends into the myth that the United States is all powerful – the repeated use of an image of military bases around the world seeks to convey this. Yet, if its power and warmongering attitude were true, then why, one can ask, hasn’t the United States gone to war with China already? Presumably, a conflict-craving nation wouldn’t allow China to build up its nuclear and military capabilities before attacking. The fact that China now has the world’s second largest expenditure on its military, after the United States, would actually deter the latter from attacking, one might assume.

A more nuanced understanding of the situation would be to admit that both the United States and China are engaging in actions that could run the risk of sparking a new superpower war. More serious articles and books have explored the duality of the situation, treating both the United States and China as equal players, and I would recommend any of the following before watching one minute of The Coming War on China: Bill Hayton’s The South China Sea: The Struggle for Power in Asia; Lyle Goldstein’s Meeting China Halfway: How to Defuse the Emerging U.S.-China Rivalry; or Edward N. Luttwak’s The Rise of China vs The Logic of Strategy.

As a closing remark, timing most likely meant Pilger had to force into his documentary a brief comment about Donald Trump. He says, “the new president Donald Trump has a problem with China. And the question is whether Trump will continue with the provocations included in this film and take us to war.” Well, this is quite a departure from Pilger’s earlier comments about the president-elect, most of which were evident at a speech he gave in March at the University of Sydney.

All too happy to leap head-first down the rabbit hole of ‘the enemy of my enemy is a friend,’ he said that “[Trump] is certainly odious; but he is also a media hate figure. That alone should arouse our skepticism.” Next he tried comparing Trump to the former British Prime Minister David Cameron, without explaining how Cameron was as extreme on immigration as Trump, before calling Obama the “Great Deporter.” He then added that Trump is “a maverick. He says the invasion of Iraq was a crime; he doesn’t want to go to war with Russia and China.

John Pilger’s new documentary The Coming War on China ought to be a film of urgent interest, given the not insubstantial possibility that the war in question might wind up killing us all. But even by Pilger’s standards, this is a vague, blustery polemic, wandering from one subject to another in a disorientating way.

Though a portion of the film was shot in China, Pilger has little of substance to say about the current political situation there – and though he supplies a brief history of racist US attitudes towards the Chinese, his real interest lies in mounting a broader critique of American foreign policy in the Pacific and beyond over the past half century.

Roughly a quarter of the running time is devoted to the US nuclear tests conducted at Bikini Atoll after World War II, and to claims that islanders were used as “human guinea pigs”. This ghastly, shameful episode merits a feature documentary of its own: in fact, one was made a few years ago, Adam Horowitz’s Nuclear Savage.

1 thought on “Trump’s WW3 & The Coming War with China”