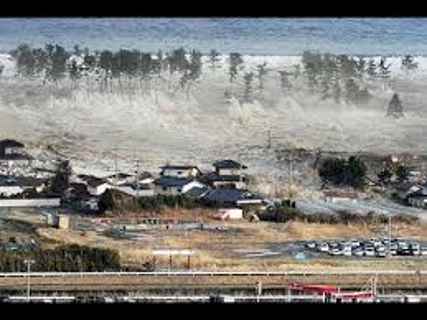 The US Government is today preparing how to tackle a predicted tsunami strike following an magnitude-9 earthquake that it fears will be the country’s biggest ever natural disaster.

The White House Earthquake Resilience Summit will be streamed live on the internet iat 5.30pm.

Emergency response officials are preparing how to deal with a magnitude-9 undersea earthquake which they expect will be triggered by the Cascadia fault line.

Experts have know there is a very real threat of the quake, but have only now begun planning the response in earnest.

The White House said a new commitment to develop an earthquake early-warning system for the US will be announced at today’s summit.

The fault line lies in the Cascadia Subduction Zone, which is seventy miles off America’s Pacific Northwest and stretches all the way from Vancouver Island to Northern California.

It is a seismic activity hotspot area where a massive quake has historically happened on average every 240 years.

But scientists, who warn that more needs to be done to prepare for the impending disaster, say the last one was 315 years ago -so it is 75 years overdue.

The problem lies with the subduction zone where it meets the Oceanic Plate and is slowly forced beneath the North American plate.

Chris Goldfinger, Oregon State earthquake geologist said: “It buckles upward and it gets pushed backward like a spring until eventually, after a few hundred years, it just has to let go.”

Researchers from the University of Washington have helped create a system which will be used across the Pacific Northwest Seismic Network (PNSN).

It could be live this year.

PNSN has released a video showing how the ShakeAlert system could provide 28 seconds’ warning of a magnitude-8 quake off the coast of Oregon.

It would take around a further 15 minutes from then for the wave to reach the shore.

John Vidale, of the UW Seismo Lab, will explain how the early warning system works today.

The idea is we’re supposed to have a system that can tell people anywhere from a few seconds to a few minutes before shaking comes in a big earthquake, and right now we tell people after it’s all over, which is useful but not as useful as telling them bef

He said: “The idea is we’re supposed to have a system that can tell people anywhere from a few seconds to a few minutes before shaking comes in a big earthquake, and right now we tell people after it’s all over, which is useful but not as useful as telling them before it happens.

The alert will be able to get to people who have signed up’s mobile phone in one second.

Early-warning systems look out for milder P-waves, which travel more quickly through the earth than the stronger tsunami causers.

It is estimated it will cost around £25million to set up and £10million a year to cover the west coast.

There is no reason to believe the earthquake is imminent, but scientists accept it could come at any time and is long overdue based on historical activity.(source)

Other useful resources:Survive Attack to Our Power Grid System (Weapon That Can Instantly End Modern Life in America)

CHINA Explosion: Neferious Activity of the Elite, or just Coincidence?