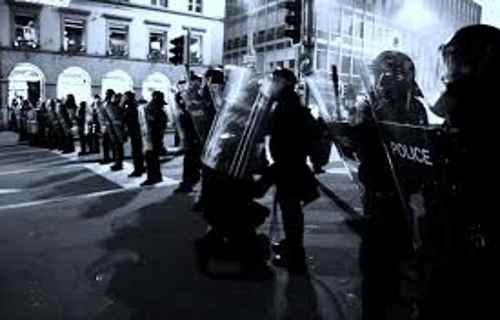 We are going to discuss some of the differences in prepping for regular disasters and preparing for civil unrest or being in a war zone. With recent events in the United States, the possibility of a second revolutionary war to restore the Republic is becoming more and more possible every day. The constant infringement on the liberties of the citizens of the United States are becoming less and less tolerable to the population. With the United States government sticking its nose in everything from regulating our religion, freedom of speech, freedom of the press and now right to keep and bear arms all under attack by the federal government and many state governments. These infringements on the liberties of the citizens of this country are beginning to wake up the populace. This requires us to prepare for other disasters besides natural.
One of the biggest stories for years in the alternative media was the mysterious and foreboding purchase by Homeland Security of more than 1.6 billion rounds of ammunition.

Now, a new Homeland Security purchase order listed on FedBizOpps also raises an eyebrow or two, given the heated and divided political and social climate at hand. Just look at what happened in Ferguson… A request for “less lethal specialty munitions” for use by Homeland Security dated March 23, 2015 reads: U.S. Customs and Border Protection (CBP) intends to solicit responses to Request for Information (RFI) 20082225-JTC for Less Lethal Specialty Munitions (LLSM) for use by the Department of Homeland Security (DHS). CBP is interested in incorporating commercial and industry practices that support this type of procurement. commodity.

A year supply of stockpiled food may be overkill for most survival situations short of an apocalyptic event (i.e. TEOTWAWKI). However, if it helps you sleep better at night knowing you have a year’s worth of food stock on the premises, what’s that investment worth to you?

On top of a wide range of gas and chemical grenades, rubber bullets and other riot rounds, the purchase calls for “controlled noise and light distraction devices,” including flash bangs which set off a 175 dB sound with 6 – 8 million candelas light bursts in 10 milliseconds.
Officially, the request is put through Customs and Border Patrol, a subset of the Department of Homeland Security, but it is unlikely that the equipment will be used to protect the border and keep out illegal aliens. But the riot gear and crowd control devices have many potential uses.

The collection of equipment provides a diverse range of toys with which authorities could push back crowds and potentially intimidate free speech as well. Are there more riots coming? Is widespread civil unrest only a matter of time? Is it related to martial law exercises like Jade Helm 15? With currencies being rapidly devalued by their respective governments, the global economy in a slow-down, and tensions over resources heating up around the world, it’s time to start considering the endgame.

According to billionaire resource investor Carlo Civelli there is likely no way out for central banks which have spent the last several years printing money hand over fist. Over his decades’ long career Civelli has either managed or financed over 20 companies, many of which now have market capitalizations in the billions of dollars, so he knows a thing or two about investing during boom times, as well as busts. warns of an endgame scenario that is nothing short of a total collapse.

And here’s the scary part: Civelli says that even gold may not be a safe haven should the worst case scenario play out: Great Depression, as Roosevelt You certainly want to make an effort to prepare for a “total collapse” scenario by being ready for the supply disruptions and credit freezes that will be the inevitable result of any currency crash or bond market unraveling. We are seeing exactly this scenario taking place in the Ukraine now, and we recently saw a similar event in Venezuela. Food, gas, toilet paper and other personal items not only exploded in price, but disappeared from the store shelves completely because of supply-line crunches. It’s a scenario that could certainly play out elsewhere as the global crisis accelerates, including right here in America, so having some stockpiles in reserve is not a bad idea.

Surviving Civil Unrest – Are You Prepared ?

The Sims family comes to Z.E.R.T. to better prepare for the breakdown of society during civil unrest. Through a series of lessons culminating in a final test, family head Charlie must guide and protect his family using the skills they have learned. Single mother Stevie fears for her son’s safety in the aftermath of a super volcano. She travels to Z.E.R.T. to refine her survival skills. During a volcanic fallout simulation, her knowledge and abilities are put to the test.

RELATED : The New World Order Is The Enemy Of Humanity – Is Almost Complete WW3 & Depopulation Coming