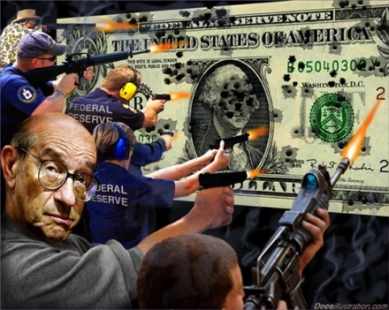 The USA Economic Collapse will be Big Time and can happen at any moment!

USA economic collapse and what you can do to prepare and live through it without pain and suffering.

American corporations began offshoring the production of goods and services for their domestic markets. Americans ceased to be employed in the manufacture of goods that they consume.

American professional occupations, such as software engineering and Information Technology, also declined as corporations moved this work abroad and brought in foreigners at lower renumeration for many of the jobs that remained domestically. Design and research jobs followed manufacturing abroad, and employment in middle class professional occupations ceased to grow. By taking the lead in offshoring production for domestic markets, US corporations force the same practice on Europe. The demise of First World employment and of Third World agricultural communities, which are supplanted by large scale monoculture, is known as Globalism.

For most Americans income has stagnated and declined for the past two decades. Much of what Americans lost in wages and salaries as their jobs were moved offshore came back to shareholders and executives in the form of capital gains and performance bonuses from the higher profits that flowed from lower foreign labor costs. The distribution of income worsened dramatically with the mega-rich capturing the gains, while the middle class ladders of upward mobility were dismantled. University graduates unable to find employment returned to live with their parents.

He talks about the fiscal cliff and that USA Economic Collapse will be Big Time. Since the rise of the high internet and the collapse of the Soviet Union have proved to be the economic undoing of the West.

This is what is occurring right now to cause the USA economic collapse!  Their are three bubbles getting ready to POP!  1st one is the Bond Bubble, it has no where to go.  If the Federal Reserve changes the interest rate, it pops triggering a domino effect to the other two bubbles.  2nd Bubble is the stock market.  The stock market is being propped up by the Fed.  3rd is the USA Dollar, which the Fed is printing more and more money to pay the bills, stabilize the economy, prevent the bond market and stock market from crashing etc…. Out of the 3, the most dangerous bubble is the USA Dollar Bubble.  It’s just a matter of time before it POPS and triggers the rest of the USA economic collapse.

This is how the USA economic collapse will happen.  As the Federal Reserve continues to print more USA Dollars the value of the dollar will decrease.  This will cause inflation.  Inflation will increase prices, more and more people will have difficulties buying food.  At first they will result to buying cheap food which will diminish their health.  As the dollar loses value, countries will stop using the USA dollar as the world currency for trade.  This will cause an excess surplus of USA dollars in the world, thus causing more value depreciation of the dollar which will result in more inflation.

Now remember the USA relies on imported products and commodities.  At that point, when this happens, as Dr. Paul Craig Robert says,  ”When you walk into to WalMart the prices will be like shopping at Nordstroms.”  Yet your income, your salary will not increase but taxes will be forced to the maximum breaking point.

Right now we are at the breaking point.  This is what YOU need to do immediately:

1st)  Buy quality non GMO, non radiated food for the long term .  Set up an account so you can buy about $250 dollars worth of food per month.  You need to have at least 2 years worth of food stocked up.  You can use this food and eat it on a monthly basis when hyperinflation begins.  You can also eat this food now as well, replacing what you buy on a monthly basis from the stores.  The USA economic collapse is at the breaking point, immediate preparation must begin now!

2nd) You need to start an online Food Store before the USA economic collapse and help others do the same.  The more people you know that prepare like this, the easier it will be for your family and friends to survive the USA Economic Collapse with little pain and suffering.  This will also supplement your income as well allowing you to buy more food or other tangible items. Its getting close to the USA Dollar Collapse so this is an immediate action preparation.