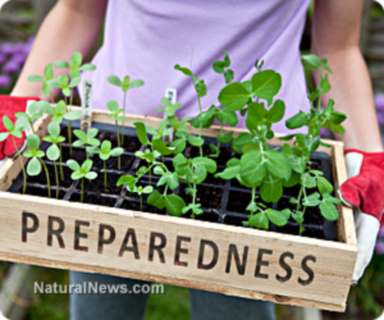 The largest natural disaster in American history just went from bad to worse.

Sweltering heat and persistent drought across the country has ravaged crops to such extremes this summer that tens of thousands of farmers and ranchers are on the verge of financial ruin. The situation is so dire that it has prompted the US Department of Agriculture to declare more than half of America a disaster area.

…more than half of all U.S. counties – 1,584 in 32 states – have been designated primary disaster areas this growing season, the vast majority of them mired in a drought that’s considered the worst in decades.

Counties in Arkansas, Georgia, Iowa, Illinois, Indiana, Kansas, Mississippi, Nebraska, Oklahoma, South Dakota, Tennessee and Wyoming were included in Wednesday’s announcement. The USDA uses the weekly U.S. Drought Monitor to help decide which counties to deem disaster areas, which makes farmers and ranchers eligible for federal aid, including low-interest emergency loans.
Without the ability to harvest their crops, many farmers are finding it difficult to make good on loans they used to fund their operations. Cattle ranchers, who can’t find hay due to the drought and whose feed prices are skyrocketing, are also feeling the pinch.

An AgWeb discussion in early July involving small business and family farmers displayed their desperation, with many commentors indicating this summer’s drought is the worst they’ve ever experienced. Others reported their crops were dying and pleaded for rain.

That rain never came, and according to industry experts and officials at the USDA, conditions are now set to intensify and worsen.

As of this week, nearly half of the nation’s corn crop was rated poor to very poor, according to the USDA’s National Agricultural Statistics Service. About 37 percent of the U.S. soybeans were lumped into that category, while nearly three-quarters of U.S. cattle acreage is in drought-affected areas, the survey showed.

The potential financial fallout in the nation’s midsection appears to be intensifying. The latest weekly Mid-America Business Conditions Index, released Wednesday, showed that the ongoing drought and global economic turmoil is hurting business in nine Midwest and Plains states, boosting worries about the prospect of another recession, according to the report.

Creighton University economist Ernie Goss, who oversees the index, said the drought will hurt farm income while the strengthening dollar hinders exports, meaning two of the most important positive factors in the region’s economy are being undermined.

Food supplies across the country – for animals and humans – are literally drying up.

This will undoubtedly lead to significant food price increases across the entire spectrum of the American diet – meat, grain, dairy, vegetables and fruit.

Corn and soybean meal are staples in animal feed and the rising prices and drought conditions are forcing farmers and ranchers to sell off their herds for slaughter. This will cause a glut in the market over the short term and you may see lower meat prices as a result but this will only be temporary. By next year the prices of meat will rise as the supply of livestock reaches multi decade lows. Supply and demand will push prices higher as a result.

Larry Pope, chief executive of Smithfield Foods has recently given a dire warning. “Beef is simply going to be too expensive to eat. Pork is not going to be too far behind. Chicken is catching up fast.” He also stated that government regulations are going to make things even worse. Almost 40% of the U.S corn crop goes to make ethanol fuel. Pope said, “Its almost a government- mandated disaster here, which is distressing”.

He warned that meat prices will rise by “significant double digits“.

For those with the ability to do so, we recommend putting away foods that your family eats regularly, and planning for at least a three to six month window of upward price pressure. Tess Pennington offers some drought preparedness tips:

The price increases will be dramatic. Expect to see fewer grocery store sales, especially those great “loss leaders” we all love to take advantage of.

Prepare for this by stocking up NOW before the major price increases hit. For instance, purchasing bulk dried corn, corn meal, and a diverse supply of bulk meats before the prices rise. Pamper your garden and get every single ounce of produce you can squeeze out of it. Buy in bulk to take advantage of lower prices and preserve food for use this winter.

Make adjustments in your shopping and eating habits now to weather the upcoming food crisis.

If you’ve got a freezer, load it up with as much meat as you can afford to buy. Package dry goods for the long-term and have a steady supply of beans, wheat (or flour), corn and rice on hand to dip into if prices do happen to jump. While we all hope for a rainy year to get struggling farmers back on their feet and our prices at the grocery stores to affordable levels, taking measures today based on the credible information available to us can help save us from paying 30% or more in food costs over the course of the next several months.

While the idea of buying commodities at lower prices today may save us money, worst case scenario planning is always in order. A well stocked food pantry can help us supplement our diets for quite some time if we experience a drought similar to the Dust Bowl of the 1930′s, which was felt for three consecutive and particularly devastating years before things began to return to normal.