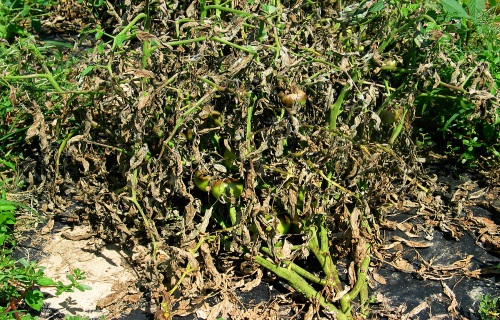 Actually, dozens of diseases may afflict a vegetable garden, but fungus, bacterial,  viral and environmental factors that cause root rot are the most common to vegetable gardens planted across the United States. Diseases caused by fungus are among the most prevalent to plague vegetable garden planters and growers, and can turn a once thriving and flourishing garden into a disaster.

The most important task is to prevent an occurrence of pests and diseases in the first place rather than having to react to them.  In fact, once a pest or disease establishes itself on your crops there is often very little you can do to control it effectively.   Protecting your plants from pests and diseases begins long before the crops are sown or planted in your garden.

1. Fusarium Wilt of Tomatoes – caused by the fungus Fusarium oxysporium lycopersici. The main symptoms are brown discolorations of the vascular tissue in the stem (see picture) and gradual yellowing and wilting of the entire plant. This fungus survives in the soil for many years. At least two races of the fungus are present in the United States. Many of the newer tomato varieties show good resistance to Race 1. However, not all existing tomato varieties have this resistance. Many other plants are affected by forms of Fusarium sp., but the form that attacks tomato is specific to tomato. 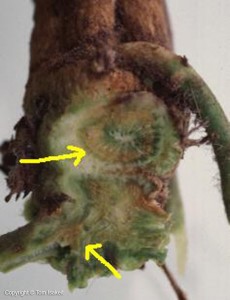 2. Southern Blight of Tomatoes – caused by the fungus Sclerotium rolfsii. Distinguishing sign is white mold, often with “seedlike” sclerotia, present on infected stem near soil line. This fungus also causes rot of tomato and other plant parts in contact with soil. The fungus lives in the soil for many years. It causes wilting and dying of many different kinds of plants. Southern blight is more common in the South in hot summer months. Tomato varieties have poor resistance to this disease. 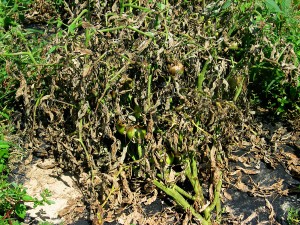 3. Bacterial Wilt of Tomatoes – caused by the bacteria Pseudomonas solanacearum. Rapid, sudden wilting of the entire plant denotes this disease. Pith of the main stem near soil line is usually brown at first, but soon develops a slimy rot.

Bacteria attack numerous other plants, especially in the Solanaceae (night shade) and legume families, and may live in soil for many years. Wilt is more apt to be a problem on newly cleared land or fields that have been in weeds for several years. Tomato varieties show poor resistance. 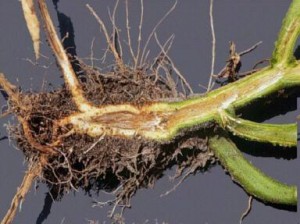 4. Early Blight of Tomatoes – caused by the fungus Alternaria solani. This disease usually begins on lower leaves and gradually spreads upward. Concentric rings (targetlike) that develop in leaf and stem spots are characteristic. The fungus may live in soils for 1 or 2 years. In addition, it is spread on transplants and by windblown spores. It may appear on fruit, mainly as firm, dark-colored decay at stem end. Some of the newer tomato varieties have a moderate degree of resistance. 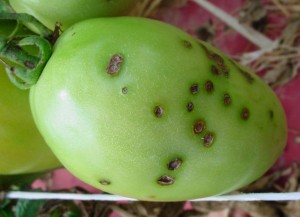 5. Gray Leaf Spot of Tomatoes – caused by the fungus Stemphylium solani. Characteristic symptom is numerous, rounded leaf spots, brown with gray centers, which are smaller than those of early blight. These spots often grow together to kill the entire leaf. The disease does not occur on the fruit. The fungus may live for 1 or 2 years in the soil. It can be spread on transplants and by windblown spores. Good resistance is found in some of the newer varieties. 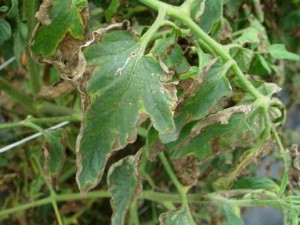 6. Corn Smut – caused by the fungus Ustilago maydis. Smut is a common disease of both sweet and field corn, but usually causes only minor crop loss. It may affect ears, stalk, leaf, and tassel, but it invades only young tissues.

The fungus can live in the soil 1 or 2 years and is spread by wind and water. Some varieties show good resistance. 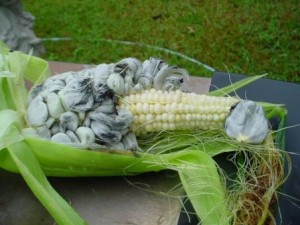 7. Powdery Mildew – caused by fungus Erysphe sp. Many different plants are attacked by the powdery mildews, but in general each powdery mildew fungus is restricted to a few closely related host species. White, moldy growth mostly on upper leaf surface is characteristic. It does not usually develop on the fruit. The fungus is spread long distances by wind. Varieties of many crops are resistant. 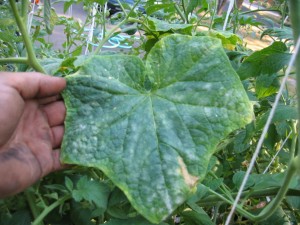 8. Nematode Rootknot – caused by the nematode Meloidogyne sp. Distinguishing symptom is galls on roots. Affected plant becomes unthrifty, off-colored, stunted, and may eventually die.Greatest damage is likely to occur during dry periods. Rootknot is common in both field and garden soils and attacks a wide variety of plants. Resistance is found in some crops. Control is mainly by soil fumigation and by cultural methods. 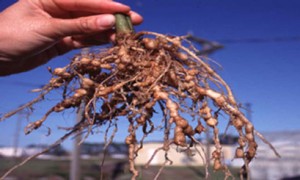 9. Stem and Root Rot on Bean – caused by the fungus Rhizoctonia solani. Characteristic symptom is reddish-brown lesions or rots on stem near or below soil line. The entire root system may be rotted. Affected young bean plants appear stunted and off-colored, and may slowly die.

10. Downy Mildew – caused by several different genera and species of fungi. Distinguishing sign is downy fungal growth on the underside of leaf spots in wet, humid weather, particularly in the early morning.

Yellow spots first develop on upper side of leaf. The fungus that attacks cucurbits does not overwinter in South Carolina but moves northward in late spring and early summer as windblown spores. 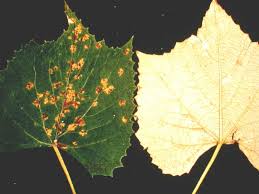 11. Squash Fruit Rot – caused by the fungus Choanephora cucurbitorum. Dense, black fuzzy mold on the surface of rotted fruit or flowers denotes this rot. It does not affect leaves and stems. This disease is a problem primarily during periods or high humidity and on crowded vigorous plants. 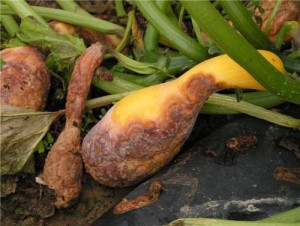 The aim of any organic gardener is to create a healthy garden by making the soil fertile and by increasing biodiversity.

The most important task is to prevent an occurrence of pests and diseases in the first place rather than having to react to them.  In fact, once a pest or disease establishes itself on your crops there is often very little you can do to control it effectively.   Protecting your plants from pests and diseases begins long before the crops are sown or planted in your garden.

What keeps your plants healthy?

A healthy soil produces healthy plants.  The care of your soil is the most important duty of every gardener.  It is the most effective method of preventing a pest or disease outbreak.  The ideal soil is a loose, moist humus rich soil full of worm and other soil life with a balanced nutrient content, including all the trace elements.  It may take a good few years to achieve this, but even the poorest soil can be made very fertile using organic methods.

A garden with good biodiversity is a lot less prone to sudden  attacks of pests and diseases as there is a balance of pests and predators. To increase the biodiversity in your garden is probably one of the most rewarding pleasures in gardening as you have the opportunity to create habitats and homes for many living creatures that have been pushed to the edge either through the  destruction of their habitats or chemical poisoning.

Beneficial habitats include: – Pond  – Log or branch pile – Dry stone wall or stone pile – Native hedgerow and include fruiting shrubs  – Native trees – Clump of nettles in the corner of your garden – Wildflower patch

Apart from creating specialist habitats you can also increase the biodiversity within your vegetable patch through:

– Crop rotations – where pests and diseases are eliminated by prolonged periods without their hosts.

– Polycultures by growing different crops next to each other (inter-cropping) or   undersowing with a green manure crop (under-cropping).

– Variety mixtures- by growing different varieties of the same vegetable in a plot.  This   technique has been very   successful with potatoes and lettuce and there is a lot of  scope for further experiments.

How to ‘Grow-a-Row’ for Those in Need