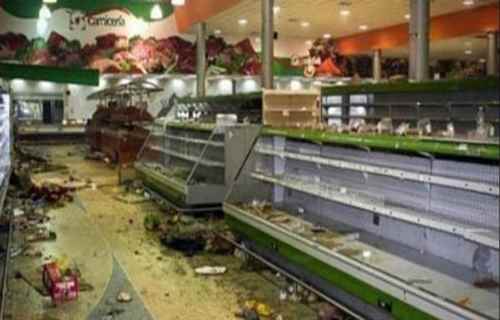 Venezuela’s opposition legislature has declared a “nutritional emergency,” proclaiming that the country simply does not have enough food to feed its population. The move comes after years of socialist rationing and shortages that forced millions to wait on lines lasting as long as six hours for a pint of milk, a bag of flour, or carton of cooking oil.

Opposition legislator Julio Borges announced the measure on Thursday, which would allow the legislature to push for more imports on basic food goods and inspect government-owned food companies to ensure they are meeting efficiency standards. “This will make corporations and expropriated lands produce food again, will simplify the process of national and foreign investment, and establish incentives for investors,” Borges promised.

Socialist party members are arguing that the decree goes beyond the scope of the power of the legislature and cannot override the executive decree President Nicolás Maduro put into motion in January, which declared an “economic emergency” and allowed the government to further intervene in private corporations. Venezuela’s Supreme Court extended the viability of the emergency decree this week, in a move many consider an attempt to keep the opposition legislature from asserting too much power over the food industry in Venezuela.

Venezuelan Food Shortage Brings Looting. Hours after they looted and set fire to a National Guard command post in this sun-baked corner of Venezuela earlier this month, a mob infuriated by worsening food shortages rammed trucks into the smoldering edifice, reducing it mostly to rubble, according to The Wall Street Journal.

Venezuela’s opposition legislature has declared a “nutritional emergency,” proclaiming that the country simply does not have enough food to feed its population. The move comes after years of socialist rationing and shortages that forced millions to wait on lines lasting as long as six hours for a pint of milk, a bag of flour, or carton of cooking oil.

The incident was just one of numerous violent clashes that have flared in pockets around the country in recent weeks as Venezuelans wait for hours in long supermarket lines for basics like milk and rice. Shortages have made hunger a palpable concern for many Wayuu Indians who live here at the northern tip of Venezuela’s 1,300-mile border with Colombia.

The soldiers had been deployed to stem rampant food smuggling and price speculation, which President Nicolás Maduro blames for triple-digit inflation and scarcity. But after they seize contraband goods, the troops themselves often become targets of increasingly desperate people.

RELATED :  YOU ABSOLUTELY NEED FOOD STORAGE — HERE ARE SOME OF THE MOST IMPORTANT REASONS TO STORE EXTRA FOOD

In a national survey, the pollster Consultores 21 found 30 percent of Venezuelans eating two or fewer meals a day during the second quarter of this year, up from 20 percent in the first quarter. Around 70 percent of people in the study also said they had stopped buying some basic food item because it had become unavailable or too expensive.

Venezuela Declares ‘Economic Emergency’ that Allows President to Rule by Decree. Maduro has previously imposed rule by decree, citing economic emergencies. In 2013, shortly after becoming president following the death of dictator Hugo Chávez, Maduro forced through the socialist-controlled legislature a law that allowed him to govern by decree for a year. Maduro used those powers to implement a number of new price controls.

Maduro announced the economic state of emergency shortly before arriving at the legislature for the annual State of the Nation address, where he insisted that “the revolutionary, socialist power of the people will not lower its flags” and urged the opposition lawmakers not to “fall into the temptation of breaking necessary balances.” He blamed the economic crisis on a “macabre game of damaging an entire society, a game of making the people suffer until they surrender” played by “the empire” [the United States].

In particular, Maduro demanded “unanimous support” in forcing President Barack Obama to repeal sanctions issued last year against Venezuela, a response to numerous human rights violations by the Maduro government. “I ask the National Assembly to support me to remove this unjust, illegal threat from over our heads… [a threat] rejected by all of Latin America and our brothers around the world.”

The opposition has rejected most of Maduro’s economic efforts, calling his rule-by-decree “extremely dangerous” for the well-being of the nation. “What is coming is more inflation, more shortages, and more problems, that decree will fix absolutely nothing,” William Dávila, a newly-minted opposition lawmaker, told reporters this week. The decree, he added, “is practically giving carte blanche to the government to keep expropriating and even to create a small ‘corral’ to limit the use of currency in banks.”

“Maduro says he wants to stimulate investments, production, and exports. There is one measure that would achieve that immediately: his resignation,” former National Assembly member María Corina Machado said following the decree. Machado served in the legislature until April 2014, when she was arbitrarily expelled and attacked with tear gas when she attempted to enter her office.

Maduro has used the alleged threat of U.S. imperialism and “economic war” to expand the powers of his office to rule be decree. Despite railing against both President Barack Obama and Venezuelan businessman, the socialist government is losing its grip on the social and economic life of the nation.

With shortages across the country, the black market has ballooned. Smugglers are reaping huge profits buying subsidized goods and reselling them in neighboring Colombia. In 2014, the smuggling epidemic was so intense the government posted 17,000 troops on the Colombian border and closed crossings at night.

It has been estimated that as much as 40 percent of Venezuela’s subsidized goods are smuggled. Furthermore, the collapsing price of oil has delivered a heavy blow to the already beleaguered economy. Inflation continues to soar with the last published figures from December showing a rate of 68.5 percent.

In this video Luke Rudkowski and Jeff Berwick travel down to Caracas Venezuela to give you a report on how people live in socialism. We not only give you a detailed update on life in Caracas but a complete social and economic breakdown of the situation on the ground.

Videos posted to social media showed desperate people falling over each other trying to get bags of rice. One user claimed the looting occurred because it is difficult to get cereal, and so people “broke down the doors and damaged infrastructure.”

The is why, Español Ramón Muchacho, Mayor of Chacao in Caracas, said the streets of the capital of Venezuela are filled with people killing animals for food. “Muchacho reported that in Venezuela, it is a “painful reality” that people “hunt cats, dogs and pigeons” to ease their hunger.”

Subsquently, Muchacho warned that Caribbean islands and Colombia may suffer an influx of refugees from Venezuela if food shortages continue in the country.

“As hunger deepens, we could see more Venezuelans fleeing by land or sea to an island,” Muchacho said.

And that is how all socialist utopias always end.

Meanwhile, as civil war appears inevitable, as previously reported there are factions vying to oust Maduro, although we are confident the dictator will hang on for dear life (literally) and force his population to endure more of this socialist nightmare. One can only hope that these shocking scenes remain relegated to the streets of offshore socialist paradises, although Americans should always prepare for the worst in case they eventually manage to make their way into the country.

3 thoughts on “Venezuela Declares Another Emergency: It Has Run Out of Food – Government Blames US For Supermarket Lootings As Food Shortages Bite”