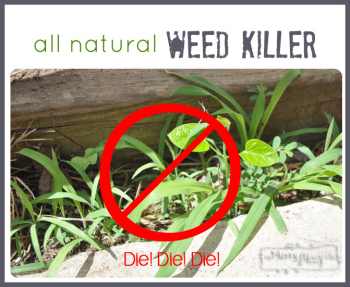 When I first read that vinegar can actually kill weeds, I was so excited! This wonder liquid that I already use all over the house in my homemade cleaning supplies can also be used in my garden? SCORE!

But I was skeptical so checked with gardening guru, Walter Reeves first, to find out his opinion. He recommends 5% white distilled vinegar only if used on young weeds that aren’t well established. Brand name weed killers contain glyphosphate, a chemical that when sprayed onto a weed, is translocated to the roots, killing them, too. So, good ole’ Walter (he’s a Georgia boy) says it won’t be very effective on established weeds. If looking for a natural option that you don’t have to keep pets and children away from (like I am), then he says there is 20% vinegar but it easily burns the skin. I checked prices and it costs about 5 times more than 5% vinegar that I buy at my grocery store.

So, I decided to try the 5% anyway. It won’t burn my skin, it’s cheap, it’s totally natural and non-toxic and, therefore, eco-friendly. I buy several gallons of vinegar every time I go to the grocery store since I use it as fabric softener and in my homemade cleaners, so I already had a gallon in the garage! 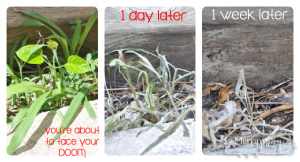 I was happily surprised to find that when one gallon of vinegar is combined with one cup of dish soap (I used Dr. Bronner’s Castile Soap since it’s non-toxic, fair-trade and organic) it works pretty well! For the established weeds, I did have to do 2 rounds. The weeds were brown in just two to four hours, and then disappeared underneath mulch and pine straw by the next day. Sweet. 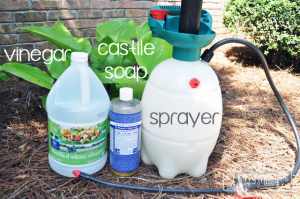 How To Use Vinegar to Kill Weeds

For a very safe, eco-friendly version, you need:

It works best on sunny, warm days with no or very light wind. The dish soap helps the vinegar to stick to the plant and the sun causes the vinegar to burn the weed and kill it. If enough is sprayed, the vinegar will also seep into the soil and temporarily change it’s pH, which will help to kill the roots.

I did find that I had to apply it very generously for it to work. I tried using both a spray bottle and garden sprayer and the garden sprayer was much easier and gave much better coverage.

The only drawback with vinegar is that it is not selective and will kill anything it touches. That’s when it’s helpful to use a spray bottle instead of the garden sprayer to protect your nice plants and grass.

According to the Daily Green, you can also go all medieval on those nasty weeds and torch ‘em or even pour boiling water over them. Both sound like they’re for the bitterly angry gardeners, but would be fun to try. Table salt or rock salts (collect them from the end of your driveway during the snowy months) also help to prevent weeds from actually growing.

Have you used vinegar in the garden before? Did it work for you?

10 Reasons You Need A Garden