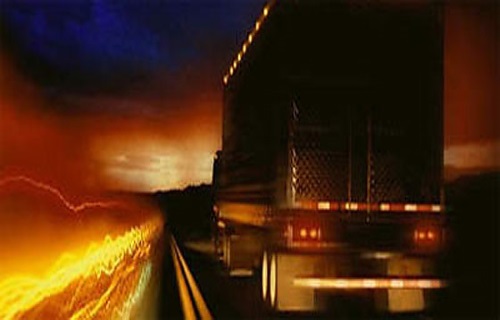 Systemic risk. I guarantee that most ordinary folks have no idea that if trucks stopped rolling all across America, within a short period of time nearly all Americans would be in a life-threatening situation from major delivery shortages. 70% of all freight that is moved in the U.S. is done so by truck. You (we) depend on that ‘stuff’ for our survival.

A major disruption in truck travel would immediately impact seven major industries, and would bring America to its knees within days due in part to “Just-In-Time” manufacturing, zero-inventory, and the fact that our modern way of life is entirely dependent upon unimpeded distribution chains.
The other day we had to take the long drive into the city, and while on the freeway Mrs. MSB commented how there were so many trucks – I mean a-lot of trucks (18-wheelers) on the road. She was right, they were with us the entire way – an endless parade – the ‘life-blood’ of the system that keeps most of us alive. I pointed out that what we were looking at is metaphorically the same as the blood vessels in our bodies, carrying the nourishment, goods and supplies which enable the existence for most of us.

This observation along our trip only reinforces the realization of our dependence on others and systems which are mostly or entirely out of our control. The truckers keep us alive – literally. Knowing that this is the case, it might motivate you to prepare for system disruptions (whatever the root cause) so that you are not left out in the cold if it ever happens…

Defense Strategy and Capabilities .Conflicts and alliances around the globe are shifting constantly, enhancing the need for reliable and timely research and analysis. CSIS analyzes a wide range of issues related to defense strategy and capabilities.
(Facts summarized from a report sourced from the newsroom of www.trucking.org)

– Many hospitals operate on a “just in time” delivery for medications and supplies.
– Hospital and nursing home food will run out in 24 hours.

– Gas station fuel will run out within 24 to 48 hours. An average gas station requires deliveries every 2.4 days.
– The subsequent fuel shortage will ripple to all automobiles and vehicles which will no longer be able to transport people to work,  police, fire, rescue, mail-package delivery, garbage pickup, public transit…
– Airlines and air-cargo will be grounded due to lack of supplies.
– Rail lines will halt due to non-delivery of the first and last mile (trucks)

– Within days, America will be buried in garbage, presenting an enormous health hazard.

– Most retailers rely on “just in time” delivery of their products to keep inventories low.
– Consumer behavior during emergencies triple the inventory turnover – speeding up the already ‘bad’ situation.

– Nearly 100% of manufacturing have switched over to “just in time” processes in order to optimize efficiency and profits. Manufacturing will shut down within hours.

– ATM’s and bank cash will run dry very quickly.
– Businesses will lose access to cash.
– Bank branches will shut down.

• Delivery of medical supplies to the affected area will cease.
• Hospitals will run out of basic supplies such as syringes and catheters
within hours. Radiopharmaceuticals will deteriorate and become
unusable.
• Service stations will begin to run out of fuel.
• Manufacturers using just-in-time manufacturing will develop component
shortages.
• U.S. mail and other package delivery will cease.

• Food shortages will begin to develop.
• Automobile fuel availability and delivery will dwindle, leading to skyrocketing
prices and long lines at the gas pumps.
• Without manufacturing components and trucks for product delivery,
assembly lines will shut down, putting thousands out of work.

• Food shortages will escalate, especially in the face of hoarding and
consumer panic.
• Supplies of essentials—such as bottled water, powdered milk, and
canned meat—at major retailers will disappear.
• ATMs will run out of cash and banks will be unable to process
transactions.
• Service stations will completely run out of fuel for autos and trucks.
• Garbage will start piling up in urban and suburban areas.
• Container ships will sit idle in ports and rail transport will be disrupted,
eventually coming to a standstill.

• Automobile travel will cease due to the lack of fuel. Without autos and
busses, many people will not be able to get to work, shop for groceries,
or access medical care.
• Hospitals will begin to exhaust oxygen supplies.

• The nation’s clean water supply will begin to run dry.

• The nation will exhaust its clean water supply and water will be safe for
drinking only after boiling. As a result gastrointestinal illnesses will
increase, further taxing an already weakened health care system.

It’s all pretty scary. The ripple effects would be severe, the specifics of which are far too many to list here. You may be of the opinion that something like this could or would never happen. You would be wrong to think that. Don’t let your normalcy bias get in the way of critical thinking.

Imagine a pandemic. A major and deadly pandemic WILL happen again. It has in the past and there is no denying that it will happen in the future. Much of the trucking transportation system would be affected for a number of reasons including they themselves being stricken or the fear of becoming infected while out in public. Even a partial trucking collapse would lead towards a chain-reaction that would cripple the rest.

Imagine a natural OR weaponized EMP (eXtreme solar flare or high altitude nuke). An EMP could destroy the electronic workings within most trucks in an instant, rendering them useless. In addition to stopping vehicles in their tracks, an EMP will bring down most all other electronic systems, making for an overall truly apocalyptic event.

A major New Madrid fault zone earthquake could sever all or much of east-west trucking distribution as major bridges are damaged or destroyed across the Mississippi river.

A super-spike in the price of diesel fuel due to a major world conflict-disaster-war could grind to a halt much of trucking traffic.

Terrorist attacks while using trucks as truck-bombs could grind trucking to a halt while the government begins mandatory inspections of all.

Any major event, terrorist or otherwise, which causes the majority of truckers to remain at home with their families for the sake of their own security or health rather than to risk leaving them behind and going out on the road.

Think about it. Read the timeline again. Are you prepared?