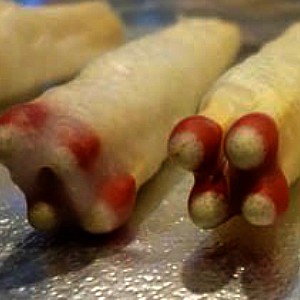 In a survival situation, your well-being and, quite possibly, your life may depend on being able to get a fire going in a hurry.

There are many different primitive methods of making fire,but all of them have one key problem…

Not even the most experienced survivalist is guaranteed a warm fire EVERY time.

To be really useful, it must, in my humble opinion, meet at least two key criteria…

First, it must be self-igniting. It simply defeats the purpose of a fire starter if you must light the fire starter with a match or other source of flame.

Second, it must be weatherproof. It must function after being dropped in water or snow, or carried in a wet pocket. Enter the firebug.

I don’t know who named them, but it wasn’t me because they were already being called that when I started making them 20 years ago, and they’ll still outdo anything you can buy at an outfitter’s shop at 10 times the price.

A firebug is basically just a bunch of Diamond brand strike-anywhere kitchen matches lashed together with waxed dental floss  and soaked in paraffin wax to provide a long burn time and to weatherproof them.

If they’re made properly they will ignite by themselves and burn two or maybe even three times as long as store-bought ones.

Now that I’ve introduced you all to these handy little woofers, let’s get into to how you can make them.

First, here’s a list of the stuff you need to make firebugs.

Most of this you either already have at home or can be picked up at any hardware store (except for the dental floss).

Only strike-anywhere matches will work!!

When you get everything together, you can set the paraffin aside for a while because you don’t need it for the first part of making a batch of these.

Be fairly generous with the floss and leave a inch or two when you tie the last knot to hold them by when you dip them in the paraffin. Make as many of these as you want to be in the batch you’re doing.

2. After you’ve made as many as you want or need, get out the saucepan.

Start the burner on the very lowest heat setting you’ve got because paraffin has a fairly low flash point and if you let it get too hot, it will flash and you will have a fire you’d have to see to believe!!

In fact, if possible, this part should be done outdoors. However you decide to melt the was make sure you have plenty of ventilation and that a chemical or CO2 extinguisher is handy.

**If the paraffin starts to smoke, it’s getting too hot and you need to quickly but carefully slide it off the heat to let it cool. **

Just a hint or two on safety: It wouldn’t hurt to wear goggles and gloves too. Put one or two 1/2lb blocks of paraffin in the saucepan and carefully heat it until it melts.

3. After it melts start dipping the bundles of matches into the paraffin for a short period (5 sec. or so) of time and laying them aside to dry off and cool off.  Repeat this on each bundle about 6 -8 times to build up a good, thick layer of wax.

4. After the firebugs have cooled cut off the dental floss and dip only the match head end of each bundle in the melted wax another 6 – 7 times letting it cool in between dips to further fuel and weatherproof the head end.

You now have a bunch of the finest fire starters I know of at a fraction of the cost of one package of store bought fire starters and these will out perform all of them.

To use them, rub the head end of one against a dry, flat rock until the paraffin wears off and it ignites. Then, simply place it under your tinder and in 5 to 10 minutes, you can have a pretty good fire going!