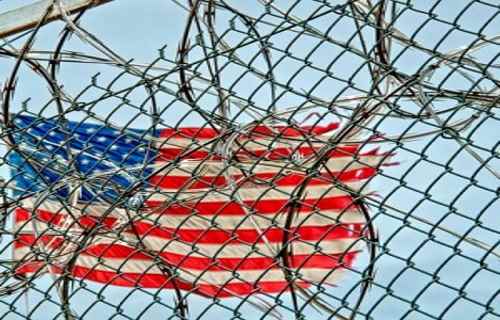 America Will Collapse Into Utter Chaos

You know that our crooked State Department led by the biggest crook ever is just chomping at the bit for the chance to loose the dogs of war and corruption upon our population so they tear each other up while GOV hides in complete comfortable safety all the while blaming this complete event upon the Conservatives, Christians, Republicans, all while using the brain dead MSM to promote and project his every word. That is why we wants this large a group of people out of the workplace and eating out of his hand so he can control them and cut them off as he pleases. Amazing how 300,000,000 people can let ONE MAN control them like this.

What day is that? The day that all electronic cash transactions cease to function. The hardest hit will be Americans on the lowest rungs of the economic ladder – families who exist on government-subsidized food programs.

“But the real problem is fiscal. We have an irresponsible government. They’ve squandered trillions of dollars around the world and gotten nothing for it. Not peace. Not love. Nothing. We’re hated and the world keeps getting more dangerous.

The printing of money is the problem — this is what I foresaw in my book The Invisible Crash. And because there’s no link to gold, they can print whatever they want. People don’t comprehend that you don’t just print paper. It’s fiat money. And too many people don’t even know what the word fiat is.

Viewed historically, the question is not whether the United States will lose its unchallenged global power, but just how precipitous and wrenching the decline will be. In place of Washington’s wishful thinking, let’s use the National Intelligence Council’s own futuristic methodology to suggest four realistic scenarios for how, whether with a bang or a whimper, U.S. global power could reach its end in the 2020s (along with four accompanying assessments of just where we are today). The future scenarios include: economic decline, oil shock, military misadventure, and World War III. While these are hardly the only possibilities when it comes to American decline or even collapse, they offer a window into an onrushing future.

Today, three main threats exist to America’s dominant position in the global economy: loss of economic clout thanks to a shrinking share of world trade, the decline of American technological innovation, and the end of the dollar’s privileged status as the global reserve currency.

By 2017, the United States had already fallen to number three in global merchandise exports, with just 11 percent of them compared to 12 percent for China and 16 percent for the European Union. There is no reason to believe that this trend will reverse itself.

Such negative trends are encouraging increasingly sharp criticism of the dollar’s role as the world’s reserve currency. “Other countries are no longer willing to buy into the idea that the U.S. knows best on economic policy.”

Simultaneously, China’s central bank governor suggested that the future might lie with a global reserve currency “disconnected from individual nations” (that is, the U.S. dollar). Take these as signposts of a world to come, and of a possible attempt, as economist Michael Hudson has argued, “to hasten the bankruptcy of the U.S. financial-military world order.”

It’s commonplace to speak of “the fog of war,” of what can’t be known in the midst of battle, of the inability of both generals and foot soldiers to foresee developments once fighting is underway. And yet that fog is nothing compared to the murky nature of the future itself, which, you might say, is the fog of human life. As Tomorrowlands at world fairs remind us, despite a human penchant for peering ahead and predicting what our lives will be like, we’re regularly surprised when the future arrives.

Remind me who, even among opponents and critics of the Bush administration’s invasion of Iraq, ever imagined that the decision to take out Saddam Hussein’s regime and occupy the country would lead to a terror caliphate in significant parts of Iraq and Syria that would conquer social media and spread like wildfire. And yet, don’t think that the future is completely unpredictable either.

In fact, there’s a certain repetition factor in our increasingly bizarro American world that lends predictability to that future. In case you hadn’t noticed, a range of U.S. military, intelligence, and national security measures that never have the effects imagined in Washington are nonetheless treasured there. As a result, they are applied again and again, usually with remarkably similar results.

The upside of this is that it offers all of us the chance to be seers (or Cassandras). So, with an emphasis on the U.S. national security state and its follies, here are my top nine American repeat headlines, each a surefire news story guaranteed to appear sometime, possibly many times, between June 2017 and the unknown future.

U.S. air power obliterates wedding party: Put this one in the future month and year of your choice, add in a country somewhere in the Greater Middle East or Africa. The possibilities are many, but the end result will be the same. Dead wedding revelers are a repetitious certainty.  If you wait, the corpses of brides and grooms (or, as the New York Post put it, “Bride and Boom!”) will come. Over the years, according to the tabulations of TomDispatch, U.S. planes and drones have knocked off at least eight wedding parties in three countries in the Greater Middle East (Iraq, Afghanistan, and Yemen) and possibly more, with perhaps 250 revelers among the casualties.

And mind you, this is just to scratch the surface of what’s predictable in the American future. I’m sure you could come up with many similarly themed headlines in no time at all. It turns out that the key to such future stories is the lack of a learning curve in Washington, more or less a necessity if the national security state plans to continue to gain power and shed the idea that it is accountable to other Americans for anything it does. If it were capable of learning from its actions, it might not survive its own failures.