Do me a favor for the next 5 minutes.  Try to forget everything you know about a TAMPON.  I know, it’s hard.  But pretend that this is the first time you have ever seen or heard of the item below and it is a new survival product on the market: the Tactical Adventure Medical Preparedness Outdoors Necessity (T.A.M.P.O.N.) 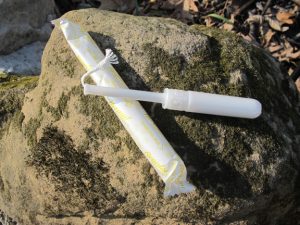 All kidding aside, a TAMPON really does have a ton of uses to a survivor.  One could even argue to include a couple in your survival kit.  Ultimately, I’ll let you be the judge.

Before I get into the details of this post, a brief history of the tampon might surprise you.

The tampon is actually regulated in the US by the Food & Drug Administration as a Class II Medical Device.  The word ‘tampon’ is a derivative of the French word tampion which means “a piece of cloth to stop a hole”.  My research indicates that tampons were used as early as the 19th century as battle dressings to plug bullet holes.  It wasn’t until later that they were used as a feminine product.  There are even accounts of tampons being used as wound plugs in modern warfare.   A friend of mine told me that it’s not uncommon for Army Medics to carry tampons in their med kits.  Tampons are sterile and come very well packaged in their own water proof container.  This only adds to their survival utility. 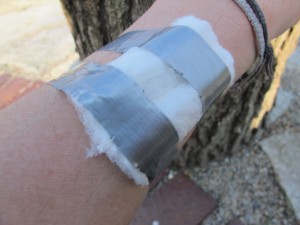 Not only are these little tactical bandages packaged in a waterproof sleeve, but they are designed to be ultra absorbent – making them the perfect first aid bandage.  They can be taped or tied over a wound as an improvised dressing.  And, as I’ve already mentioned, they can be used to plug a bullet hole until more detailed medical attention can be administered.  Accounts of this use date back to World War I.  Many items in modern society were first developed as a facet of military research – tampons being a prime example.  The internet being another.  The list goes on and on. 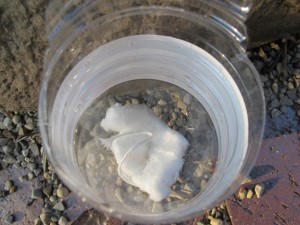 Another excellent tampon survival use is as a Crude Water Filter.  While it will not filter out biological, chemical or heavy metal threats, it can certainly be used to filter out sediments and floating particulates.  This would be considered a 1st Phase Filter and can drastically increase the life and efficacy of your main water filter.  You can also use a filter like this before boiling to filter out larger particulates.  In this example, I’ve pushed a tampon into the neck of an empty water bottle.  I poked a small hole in the cap and then poured in dirty water to filter through the tampon and into the container below. 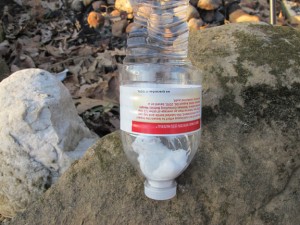 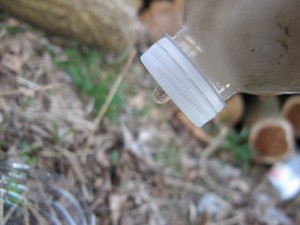 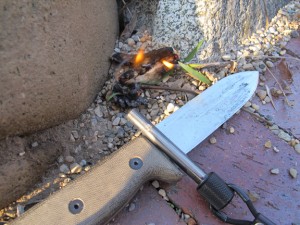 Nearly everyone knows that cotton makes an excellent fire tinder.  When the dry cotton fibers of a tampon are pulled apart and hit with a spark or flame it will burst into a nice steady fire.  If you’ve done the right amount of fire prep-work you can easily split 1 tampon into 3 or 4 fire starting tinder bundles.  Add in some chap-stick or petroleum jelly and you’ve got an even better fire starting tinder. 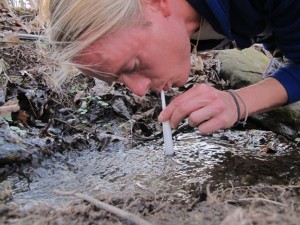 Yes, I have a tampon in my mouth – don’t laugh.  As a last ditch water filter, you can make an improvised Survival Straw from the plastic housing and cotton from a tampon.  As you can see in the photos below, just tear off a bit of the cotton and stuff it into the plastic housing.  I find it better to leave a little bit sticking out to make the housing pieces wedge tightly together. 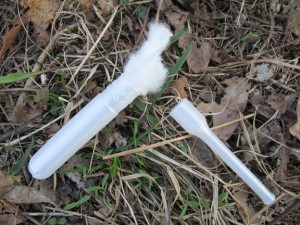 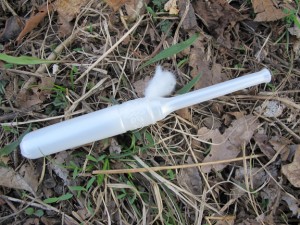 Again, this filter will not PURIFY your water by removing biological, chemical or heavy metal threats but it will filter out sediments and particulates.  This would be a last ditch effort if no methods of water purification were available. 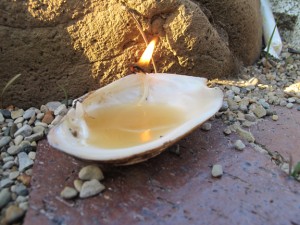 In the photo above I used the string on a tampon as a wick in an improvised candle which I made from rendered animal fat and a fresh water mussel shell I found down by the creek at Willow Haven.  After the string soaked up some of the fat, this candle burned solid for 20 minutes while I took the photos and still had plenty of wick left.  Pine sap would have also worked as a fuel.

The string attached to a tampon is a cotton twisted cord typically made up of several 4-6″ pieces of twine.  Though it’s not much, it is usable cordage.  This amount of cordage could easily be used to make a Paiute Deadfall Trap. 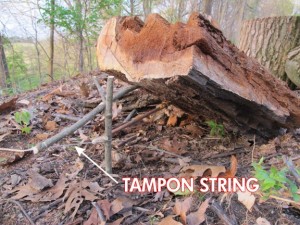 I’m sure there are also numerous other uses for small amounts of quality cordage.  For example, I also use this cordage in the next Survival Use below… The Blow Gun certainly has it’s place in survival history.  From Native Americans to tribes in New Guinea, the Blow Gun and primitive darts have put food on the table for 1000s of years.  They are silent and deadly hunting tools – especially for small game.  Oftentimes, especially here in the US, natural cotton was used as Blow Dart Fletching.  Thus, the cotton from a Tampon is a perfect candidate to make cotton fletched blow darts.  I used the string on the tampon to lash it into place on this bamboo skewer. 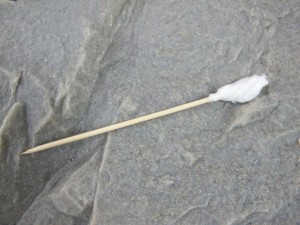 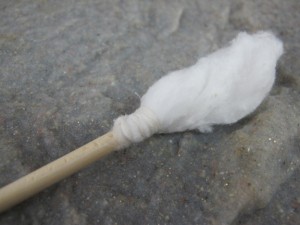 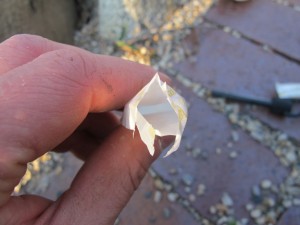 If nothing else, this post is another lesson in the importance of looking at every day products through the eyes of a survivalist.  Creativity and innovation are critical.

Remember, it’s not IF but WHEN,

About Willow Haven Outdoor & Creek Stewart
Creek Stewart is the Owner and Lead Instructor at Willow Haven Outdoor – a leading Survival and Preparedness Training Facility located on 21-acres in Central Indiana.  For more information on Survival Courses and Clinics offered at WHO, click HERE.  Creek is also author of Build the Perfect Bug Out Bag: Your 72-Hour Disaster Survival Kit and The Unofficial Hunger Games Wilderness Survival Guide.  You can contact Creek directly at [email protected]

A Time to Stop and Think about Survival

When your loved ones get hurt or killed