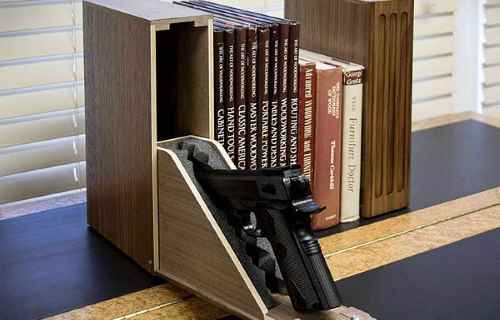 Where have you stashed a handgun in your home or car that you feel is an especially clever stashing place?

Here is a list from a very popular internet thread where all these ideas are collecting.

Hiding Places for Firearms
Empty cereal box in pantry, back when I lived in the ‘hood’. Was hoping thieves wouldn’t be hungry! Kaboom cereal in Kill Bill
Hanging upside down from a hook under the bathroom cabinet, just above the door. Inside a closet (not a walk-in) up over the door. Most closets are “shallow” and while a Burglar might go thru your clothes and items on shelving, he probably won’t look straight-up over his head.
Behind a decorative blanket hung like a cheap tapestry
Non-locking hideaway picture frame.
False bottom in bedside drawer.
Fake electrical outlets.
Some folks split the upholstery seam on the rear of the passenger’s seat toward the driver–insert a small holster and appropriate handgun, sew Velcro on the seams to reseal.
Along with my storm door, my main entry door is steel with only a small window at the top. I have a nylon holster with my Colt Detective Special velcroed to the inside of the door, just above the doorknob, canted toward me about 45 degrees, when I open it. I can open the door to someone, & they never know my hand is just inches from a weapon. Should I invite them in, I simply close the storm door and leave the main door open, which puts the gun back against a wall and is never seen by a guest.
At my desk is a scanner. It has no guts. Lift up the top, and remove handgun.
A good method in general when you’re away from your home is to take whatever you want to hide, stash it in a garbage bag, and put it amongst dirty clothes. NO ONE looks through dirty clothes…unless they’re a perv…then they’re not usually looking to rob you in that case.
On the road, usually hide them in with my dirty underwear…… Go ahead, grab yourself a big handful of that!
One day when I was replacing the sagging cloth under the couch (you know, the flimsy cloth that covers the couch’s framework?), and realized it would be a great hiding spot. I was surprised by how much room there is under there. I got the dremel and hack saw out and after a little work; I made a horizontal system of hooks with belt fasteners (actually milsurp canvas belts) that can hold four rifles lengthwise. I also made a small wooden cubby-hole and screwed it to the framework near the arm rest. That’s where my barbeque revolvers go. Now it’s not a practical place to store your “go-to” weapons, but it is very discreet place to store your valuable rifles. I attached Velcro along the cloth and underside of the couch so all you have to do is flip the couch back, undo the Velcro and you have full access to your hidden rifles. It’s funny to have guests sitting on your couch, clueless to the fact that they’ve got four rifles and two S&W’s 9″ from their butts.
The Sportsman guide has a wall clock that opens up to store a med. to small handgunin. Runs about $55 after shipping. And the clock works!
Back when I lived in Chicago I used to keep a fairly short, folding-stock 12ga situated diagonally in a clean extra-extra large pizza box lodged between my trashcan and my kitchen cabinets. It looked like it was just trash waiting for trash-day…
In the closet, on a CHEAP plastic hanger (easily broken), (through the trigger guard, no round in chamber), covered with a button up shirt.
Under the towels in the master bath.
I met a woman today who’s designing a holster for a derringer that will go between her uh………….mammary glands……
In an inside jacket pocket on a jacket on a hook in the closet.
Under the skirt of a spare toilet paper girl in master bath where no guests go.
My brother in law hid his revolver in the brown paper grocery bags that he had folded next to his refrigerator — you know how they get stuck in that space between the cabinet and fridge. He put it in a bag and folded it up.
Between the window curtains and the wall above the windows. Can’t be seen from the outside and if your curtains are heavy, can’t be seen from the inside. Yet the gun can remain on a hook just waiting to be used. 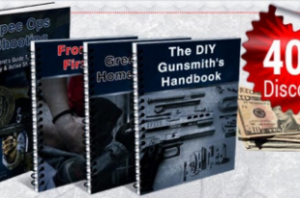 I used to have a 12 gauge in a soft gun case hanging from a hook, centered on the back of my bedroom door. I would then throw/tuck/hang a flannel robe over it. I kept the door open, so no one ever noticed the added “heft” of the door.
Inside a trophy. If you lift up the brass plate it’s hollow inside. If it’s big enough, anyway. This one was one of my parent’s bowling trophies.
I used to keep an old Colt Police Positive in a Ziploc bag under some frozen veggies in my freezer. Can still shoot thru the bag…if ya need to…
I bought a good-sized pistol safe (a foot square, or a little bigger) that uses a credit card swipe to open electronically. I use an outdated credit card for it. I have the card hidden nearby, in a place that I don’t think anyone could accidentally find. Yet, it’s so close, that I’m positive that I cangrab the card and swipe it faster than I could punch in a combo, even on a finger touch safe. It was less than $100 as well. You could carry a backup identical card in your wallet. Fingerprint ones now too.

Old shoebox under the bed at night. Gun safe when I leave the house during the daytime.
I did this at home and it works great! A typical nightstand or dresser has room between the drawers and the outer paneling. This opening is the thickness of the frame of the cabinet. I removed the bottom drawer, drilled a hole in front of the rear frame and inserted a wooden peg so that the gun is along the side of the cabinet. The peg is on an angle so that when the barrel is fully seated it creates a slight interference with the bottom of the opening. I have a Ruger SP101 .357 that fits perfectly onto the peg and is held tightly. The drawer can be pulled out and dumped, the whole nightstand could be dumped forward and the gun stays tightly in place. I know it is there and because I shoot it almost every weekend and can grab it without looking, however a bad guy would have to get down on all fours and shine a flashlight into the open to see it.
How about behind a vent or cold air return? Before I got a safe, I would put a cased pistol in the vent work. I placed it out of sight, so if they pulled off the vent cover, they couldn’t see it. The cold air return was next to the bed, so it was easy to get to in the night.
Dancers carry dance bags for shoes. One side pocket is exclusively reserved for a loaded Glock 29 in 10mm that is put inside a Fobus belt holster. This obviates any danger of putting a finger inside the trigger guard while withdrawing the handgun.
I use a small CD wallet to keep my trusty little Kel-Tec 380 and a reload in. Makes for a handy place to slip the pistol and holster into when I have to take it out of my pocket for a little while or while I’m driving…stick it right between the seat and console so it’s more accessible than being in my pocket.
I bought a/c grills at my old house and made boxes 4″ deep to fit in the stud walls, and placed them up towards the ceiling line like the old wall registers. That way they were high enough the boys couldn’t reach them but low enough my wife could. The grill stayed on with a rubber band. Was there 11 years and no one ever knew.
Ever thought of using an electrical box? I keep a spare set of keys in a dummy electrical disconnect box outside my house.
A/C vents/ducts/intakes. Usually A/C vents are mounted high and require a stool or ladder to get access. Unscrew panel, tuck in gun, replace panel.
While most of my firearms are in my safe, I have the usual few scattered out and hidden in strategic locations similar to those already mentioned. To add confusion to the would be thief, I give him what he wants, upfront. To “express myself” I have several desirable nonfunctioning/unloaded firearms in plain sight as an art form. Upon arriving home, it’s easy to see if any of these are moved or missing, which would indicate that someone unwelcome has entered my home. If any of my “indicator guns” where disturbed/missing upon my arrival, I’d back out and call the Sheriff.
Another one that I have seen but not used is a hollowed out water heater complete with pipes that disappear into the wall. The door is hidden on the back side.
I keep a 1911 in an old boot that is with a bunch of other shoes on the floor of my closet.
I collect beer steins, and have a Davis 22mag derringer in my favorite one.
In a special place buried outside, just in case I come back to the house unarmed and have to defend it.
When we had tiling installed, I specifically created a false tile. Get on the floor? Sure, can you turn around for a second?
Pull the carpet back, grab a hammer & chisel and get to work!