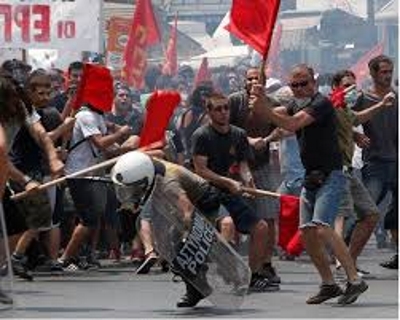 With great reluctance, the German Parliament has voted in favor of beginning negotiations on the 86 billion euro Greek Bailout deal. 49% of Germans did not want to enter talks over the burden of relieving Greece of its 320 Billion Euro Debt. The credit control limits on the restriction to withdraw only 60 Euros per day will only be eased gradually. While a rise in the Value Added Tax will rise from 13% to 23% in the next few days. Raising prices on everything, in a country struggling with a broken infrastructure. Economist John Perkins suggested Greece turn to China’s banks rather than kneel to the Sovereign sucking IMF and EU monstrosity.

The Greek people are furious. Right Wing Golden Dawn Party Member Ilias Kasidarias tore up the bailout deal,reflecting the rising anger amongst the people of Greece, who voted by 61 percent to reject austerity. Their wishes were ignored.

The terms imposed by the Euro leaders in the all night tug of war negotiations resulted in Greece surrendering much of its sovereignty to outside supervision. Legislation must be passed to cut pensions, a chokehold on collective bargaining agreements and a continuation of spending constraints. Basically, a hell on Earth for the lifestyles of the average Greek citizen. Prime Minister Tspiras is now facing nothing short of a revolution. How do you sell the death of democracy to the birthplace of democracy?

With cotton in their ears to the lowly voices all around them, the globalists are hastily playing their cards as the Eurozone, the demon child conceived in the backrooms of the 1955 Bilderberg meetings, spirals out of control.(source)