Here are just a few examples in the (ever-growing) ‘Food Not Fit to Eat’ category.

In what is sure to be a continuing series, Truthstream Media.com documented just a few stand out items while browsing through the grocery store. There were lots of healthy, organic choices, as well as lots of other… stuff.

Let’s face it! It’s a target rich environment: food just isn’t food anymore. That is, the stuff being marketed to us all under an endless array of recognizable brand names and beneficial-sounding buzz terms. We could probably choose an item at random, and at least 9 out of 10 times, for every nutritional advantage to any given item on the shelf, there is a lurking danger that could cause damage or negative side effects. 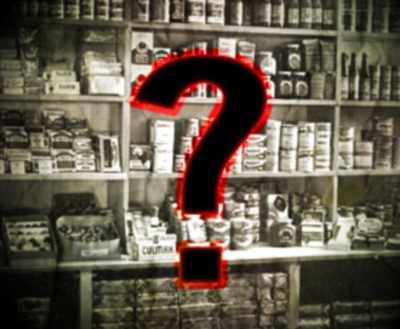 Hidden ingredients are the norm, and until we educate ourselves and become disciplined enough to avoid ALL the things we shouldn’t be eating, it’s going to be nearly impossible to get/stay healthy. And it’s worth it to not only BE alive but to also FEEL alive while you are.

So until the next round of ‘Adventures in Grocery Shopping’ consider these examples, think twice about what you plan to eat and READ ALL LABELS before putting anything in your cart.

I Can’t Believe It’s Not Honey

Among the variety of honey products for sale was an artificial imitation honey promoted by a prominent diabetes organization that contained several dangerous ingredients, some of which could be particularly problematic for diabetics. Not only is the artificial sweetener acesulfame K a big issue, but the leading ingredient maltitol syrup (manufactured from corn starch, a likely GMO ingredient) has a very high glycemic index, with maltitol syrup rated almost as high as sugar!

The bittersweet irony is that many studies have shown aspartame and other artificial sweeteners (in this case acesulfame potassium) to be more dangerous for diabetics than regular sugarand can induce more weight gain and aggravate low blood sugar attacks.

A scientific study conducted in 2008 by the Centre of Advanced Study, Cell and Chromosome Research at the University of Calcutta titled, “Genotoxicity testing of low-calorie sweeteners: aspartame, acesulfame-K, and saccharin” found that acesulfame potassium and saccharin caused even greater DNA damage than even aspartame!

Acesulfame Potassium (K) was approved for use by the FDA as a safe artificial sweetener in July, l988. It is a derivative of acetoacetic acid. Unfortunately, several potential problems associated with the use of acesulfame have been raised. They are based largely on animal studies since testing on humans remains limited. The findings showed the following:

Acesulfame K apparently produced lung tumors, breast tumors, rare types of tumors of other organs (such as the thymus gland), several forms of leukemia and chronic respiratory disease in several rodent studies, even when less than maximum doses were given. According to the Center for Science in the Public Interest, it was petitioned on August 29, l988 for a stay of approval by the FDA because of “significant doubt” about its safety.

For more on big store bought honey – and its many unlabeled imitators – check out this Natural News article “Shock finding: More than 75 percent of all ‘honey’ sold in grocery stores contains no honey at all, by definition”:

Why does bleached coffee cost less?

When you buy coffee filters at the grocery story, you have to pay more for filters not processed with bleach – an additional manufacturing step. Why? It essentially encourages everyone to pick up the bleached variety by default, just to save a healthy quarter or so.

And why are the filters we brew our coffee through bleached by default anyway?

What’s the big deal about bleach in a product that filters food & water you plan to drink? According to Green Living Works, bleached coffee filters may well be leaching cancer-causing dioxins – some of the most toxic chemicals known to science – into your brew! Around 25 percent of the residual dioxins are typically ingested, but worse still, they bio-accumulate over time… leading to a less than perky result.

Dioxins were made famous via the use of Agent Orange by the U.S. on the Vietnamese during the Vietnam War. Agent Orange was produced by Dow and Monsanto for American military application. Millions of Vietnamese suffered immensely with cancers, neurological damage, mutations and birth defects, etc., along with tens of thousands of U.S. veterans.

That cosmetic whitening effect via bleach, etc. is done to a host of other products, too, and could be taking a toll on your health. Even those products you don’t eat/drink may be entering the body through the skin or breathing passages.

What’s In That ‘Secret’ Sauce?

Some special sauces are made even more ‘special’ with your favorite corporate logos, contributing toward even more high fructose (GMO) corn syrup, plus tons of other “natural” and artificial flavors. And chemicals. Enough to make anyone chronically ill.

While sugar itself is plenty dangerous and should be consumed minimally and with restraint, a number of substitutes have their own issues that may even out do the harm of plain sugar.

Natural News covers just some of the issues with HFCS, noting its common usage in popular name brand barbeque sauces:

What is HFCS?
High fructose corn syrup is a pseudo-food borne out of the marriage of convenience, using government-subsidized corn with industrial chemical food processing methods. Mercury is used in order to transform corn starch into corn syrup. Testing has revealed that this toxic chemical may remain present in the resulting “food” product.

Moreover, the makers of the documentary King Corn demonstrate the complicated technology and many steps needed to transform yellow dent #2 corn (different from corn-on-the-cob) into the high fructose corn syrup sweetener that has become so pervasive in our foods, including the use of a number of dangerous and/or toxic enzymes and ingredients.

Must be why this video goes in the “science and technology” category…Yum!

The next time you want to pour a chemical soup all over your meats, or what have you, head on down to your average grocery store…

Aaron and Melissa created TruthstreamMedia.com as an outlet to examine the news, place it in a broader context, uncover the deceptions, pierce through the fabric of illusions, grasp the underlying factors, know the real enemy, unshackle from the system, and begin to imagine the path towards taking back our lives, one step at a time, so that one day we might truly be free…