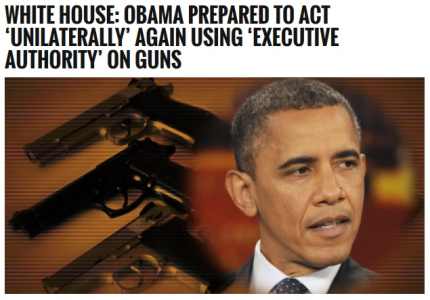 The official was responding to a journalist’s questions about the President’s reaction to news of a shooting that occurred at an Oregon high school. Two people were killed, including the shooter.

While the President is looking for ways to implement his gun control agenda unilaterally, Earnest stressed that the Administration would also like to see legislative action to increase gun control.

“The President’s goal is to look for opportunities to act administratively, unilaterally using his executive authority to try to make our communities safer,” Earnest said. “We’re always looking for those opportunities. But none of those opportunities when they present themselves is going to be an acceptable substitute for robust legislative action.”

“There’s no doubt there has been an alarming frequency of tragic incidents of gun violence that are concerning to Democrats and Republicans in Washington but more importantly to people all across the country,” Earnest said. “The question is what can we do to make certain something like this never ever happens again? There are going to be other tragedies. The question, I think, really facing lawmakers right now is what common sense steps can Democrats and Republicans take to reduce the likelihood of gun violence.”

During an Internet question-and-answer appearance on the social networking site Tumbler Tuesday, President Obama told participants that he felt his biggest frustration as President was his inability to convince Congress to pass stricter gun control legislation.

“People ask me what I’m proudest of and what are my biggest frustrations as president,” Obama said. “My biggest frustration is that this society hasn’t been willing to take some basic steps to keep guns out of the hands of people who can do damage. We’re the only developed country where this happens. And it happens weekly. Our levels of gun violence are off the charts.

“If public opinion does not demand change in Congress, it will not change,” he said.