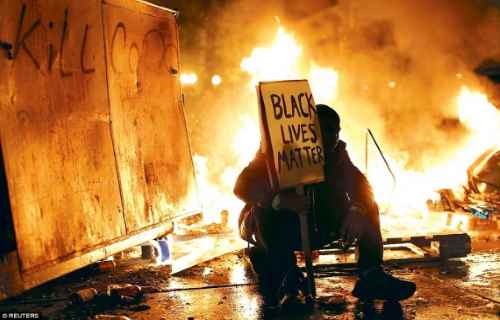 “Black Lives Matter” protests in 37 cities this Friday allegedly include attack plans for “bloodbaths” timed to take place almost simultaneously, toward a goal of imposing Martial Law in the USA according to postings on the “Dark Web.”  Adding credibility to these claims is the FACT that all 37 rallies are planned to begin simultaneously at 7:00 PM eastern US time, regardless of the time zone wherein the protests actually take place.

The dark web is the World Wide Web content that exists on darknets, overlay networks which use the public Internet but which require specific software, configurations or authorization to access. The dark web forms a small part of the deep web, the part of the Web not indexed bysearch engines, although sometimes the term “deep web” is confusingly used to refer specifically to the dark web.

The darknets which constitute the dark web include small, friend-to-friend peer-to-peer networks, as well as large, popular networks like Freenet, I2P, and Tor, operated by public organizations and individuals. Users of the dark web refer to the regular web as the Clearnet due to its unencrypted nature. The Tor dark web may be referred to as onionland, a reference to the network’s top level domain suffix .onion and the traffic anonymization technique of onion routing.

The most infamous web site on the Dark Web was called “Silk Road” on which illegal drugs like Cocaine, Heroin, Ecstacy and all the rest, were openly sold, paid for with untraceable BitCoin and delivered by various means.  It took the FBI years to finally track down the owner/organizer of “Silk Road” before they could close it down and imprison him.  But Silk Road was just ONE of the thousands of Dark Web sites on which all sorts of activities take place.  Several Dark Web sites are involved in planning acts of extreme violence for this Friday’s “Black Lives Matter” protests in the following 37 US Cities:

Each rally is timed to begin at exactly the same time as every other rally: 7:00 PM EASTERN US TIME.  This is very significant because it is different from any rally effort in the past.  In the past, rallies were all scheduled to begin at “local” time.  So there would logically be an hour difference in the start times for each time zone in the US; but not this Friday.  This Friday, all the rallies are scheduled to start at 7PM EDT and this is very worrisome because if 37 attacks erupt in 37 US cities simultaneously, then the entire nation would find itself under siege and THAT may be a reason for the imposition of Martial Law.

RELATED : Guide: How to access the deep web and darknet

Deray McKesson, a former candidate for Mayor of Baltimore, is the Black Lives Matter organizer whose Twitter account was HACKED, revealing discussion he was having with other BLM activists about “imposing Martial Law” so as to “cancel the election” and have “Obama remain in office.”  The full story about McKesson, including images of his HACKED Twitter messages talking about Martial Law and keeping Obama in office after elections are cancelled, appearsHERE.  These messages were part of a plan known as “Summer of Chaos” and they culminate with such ferocious “protests” at the Republican and Democrat political conventions, that the country is driven into Martial Law.

If attacks were to take place this Friday, in 37 cities, and that was followed by similar ferocious attacks at the GOP and Democrat conventions, it is not hard to speculate that “someone” might exploit such a situation to keep Obama as President of the United States despite his term of office expiring in about 192 days.  It is, after all, within the power of a US President to declare Martial Law, but not to keep himself in office beyond the expiration of his term of office.

Why then did President Obama, meet with Deray McKesson at the White House yesterday for four and a half hours?

Why would McKesson, who was caught planning the imposition of Martial Law to keep Obama in Office, be given a 4.5 hour meeting with Obama just days before McKesson’s plans are allegedly to take place?  Is it because Obama is “in on it?”  Is it because this really _is_ a plan for Martial Law in the USA?  Why else would a nobody like Deray McKesson, even have access to the President of the United States?

The writing seems to be on the wall, folks.  TOMORROW, Friday July 15, is when the 37 rallies are planned to start simultaneously.  Web sites on the Dark Web show plans for hideous, murderous violence at those events.  The Republican Convention is due to start three days later, on July 18.

Will the country be in violent turmoil starting tomorrow?  Will _YOU_ be one of the people who attend “protests” in the cities above and possibly become a victim of deadly violence?

Know this: Barack Hussein Obama’s Presidency expires at 12 Noon, eastern time, on January 20, 2017.  Nothing on the face of the earth can change that.  After that date, he is no longer President, no matter what he says.  Remember that.  Act accordingly to protect our liberty.

GOP CONVENTION “THE SHOT HEARD ROUND THE WORLD”

For the coming Republican National Convention in Cleveland, the New Black Panther Party (NBPP) has announcd it will avail itself of the “open carry” laws of Oihio, and attend a protest of the convention HEAVILY ARMED.

The Police in Cleveland will also be present, bearing their typical weaponry as it is right and proper for police to do.

With all the tension nationwide, what happens if someone . . . . no one knows who . . . . fires one or more gunshots in a situation like that?

Well, it is reasonable to believe that everyone who is armed, is going to raise those arms over the gunshot(s), trying to find them and protect themselves.  So how hard would it be to trigger a massive gun battle between the New Black Panther Party and cops, if someone fires a gun and bothe the NBPP and Cops raise their weapons at each other over it?

This seems like a “no brainer.”  We could see and absolute SLAUGHTER take place under such circumstances.  And if such a slaughter does take place, it will only serve to ignite even more widespread violence.

We hope that all this is just rumor and wild-eyed conspiracy theory.  We hope that no bad act is perpetrated by ANYONE at the 37 rallies or at the political conventions.  That’s not how this country is supposed to operate.

But if things do go bad, they will likely go bad in an unimaginably big — and fast — manner.  Prepare yourselves.