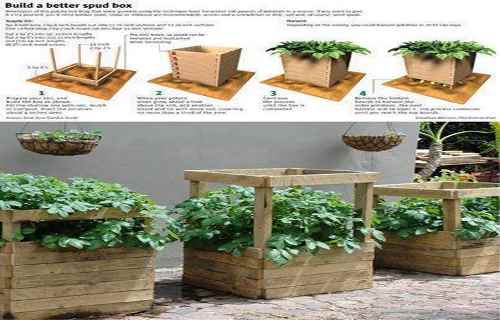 Don’t you mean potato grow box? Nope, that’s not a typo. As the areas of my garden devoted to perennials has gradually increased, the need to use the remaining space more efficiently has become more important. Using trellises and other vertical growing methods greatly help in this challenge.

Though my first attempts at growing potatoes the last couple of years has been successful, it took up a fair portion of the raised bed(s) they were growing in. This year, I am again doing another “first” – growing potatoes vertically. The “potato box” or “spud box” has become an effective method to produce a large quantity of potatoes in a small space. The idea is ingenious – forcing the potato plant to “stretch” upward as it grows allows more area of the plant to produce potatoes.

The potato “growing” box is just that – a series of frames that stack, or grow, as the potato plant grows. I like to look at the frames as resembling the floors of a building. In this project, our potato “building” will be six stories tall.
The list of things you’ll need:

3. Pre-drill 2 holes on each end of the 24-inch pieces, about 3/4″ from the edge. This will position the screws to go into the center of the cut side of the 21-inch pieces.

5. Repeat STEP 4 five more times. This will give you a total of 6 frames. These six frames will stack on top of each other, creating your box.

8. Repeat STEP 7 for the remaining three inside corners of the frame. The base of the box will now look like an upside-down square table.

9. Slip one of the other frames onto the base frame, with the four “legs” being on the inside. These two “floors” will be the area we will plant in. Note: If you wish to dig into the ground to plant your seed potatoes, you can omit this step for now. I simply chose to start the potatoes inside the box, rather than digging into the ground below the box.
Planting & Growing:

10. Find the location (full sun preferably) for your box and clear away any sod, rocks or debris. Place the box into position.

11. Prepare the soil at the base of the box. You can use your existing soil if it has good drainage and has some organic matter already in it. Otherwise, potting soil, compost, or finely-chopped mulch can be added. I used a mix that was about 40% compost, 40% chopped leaves, straw and grass clippings, and 20% existing soil. I filled the “bottom two floors” with the mix, almost to the top edge of the frame.

12. Plant the seed potatoes about 3″-4″ deep, and cover with soil. I added a thin layer of larger leaves as a mulch.

13. When your potato plants are about a foot high, add another frame and fill it with more soil, covering no more than a third of the plant. Continue this process through the season, until the remaining frames have been added.

14. To harvest, remove the bottom frame’s boards to access the bottom layer of soil. When all of the potatoes have been removed from this level, replace the soil and reattach the boards. To harvest more potatoes, repeat those same steps with the second frame’s boards. And so on, and so on, until you’ve reached the top frame.

How to Can Fresh Small Potatoes