Do you believe in “coincidences”?  There have always been droughts all throughout human history.  So if there were a couple of isolated droughts in 2022, it wouldn’t be a big… Read more » 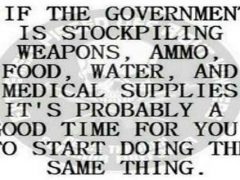 US Budget Deficit soars to $209 Billion in November — Debts & Deficits are Out of Control !! The U.S. budget deficit mushroomed by 2% last month to $209 billion,… Read more »

President Putin announcing the beginning of a new era and a new stage in history, says he further stated that the Western colonial powers cannot offer its own model of… Read more »

Vladimir Putin is threatening to use nukes again.  If Russia ultimately decides to conduct a surprise first strike, are you living near a location that is likely to get nuked? … Read more »