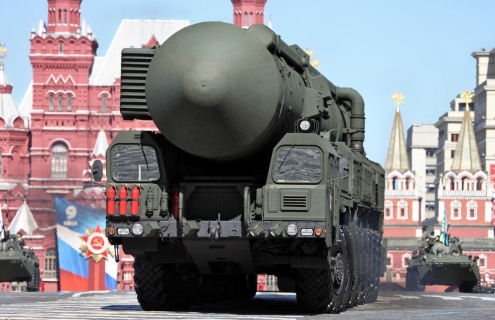 Putin and Obama think they’ve got this crisis contained. Two prominent experts say they may be wrong.

The United States and Russia may be unwittingly stumbling down a path to deeper confrontation and even war, cautioned two prominent American national-security experts at a panel in Washington, D.C. Tuesday. Graham Allison, director of Harvard University’s Belfer Center for Science and International Affairs, and Dimitri K. Simes, president of the Center for the National Interest and publisher of this magazine, suggested that while leaders in both countries may not intend to escalate their disagreements on matters like the Ukraine crisis, poorly structured decision processes, opposing goals and divergent narratives can still produce conflict. “Even as they state that they don’t want a confrontation—with full conviction,” said Simes, “they are seeking a victory without war…Both sides show little inclination to compromise on what they consider to be fundamental and what they believe they are entitled to.”

Worse, warned Allison, Russia may believe that the use of threats and military force will produce the best outcomes in a serious confrontation with the West. “Russia has escalation dominance,” said Allison, and “from a Russian point of view,” shaping the confrontation in such a way “sends a very powerful message, especially to the Europeans.” Allison and Simes suggested that a diplomatic resolution is still very possible—“we are not predicting World War Three,” in Simes’ words—but that “this is not [a] time in the U.S.-Russian relationship when you want to be too polite about stating what the danger is.”

Allison, who had held responsibility for coordinating the Pentagon’s policy toward Russia as an assistant secretary of defense during the Clinton administration, argued that Russia’s competitive strengths vis a vis the United States and its European allies are principally military, and further that Russians have told him that they believe that the Europeans won’t fight “for anything,” while the United States has been worn out by more than a decade of warfare. For the United States, meanwhile, Russian action in the Baltic states—which are NATO members—would create enormous political difficulties, noting that if one asked most ordinary Americans what they thought about the prospect of sending American troops to go to war with Russia over Estonia, “maybe they’ll get out their iPhones and search for ‘Estonia.’”

Simes added that the national-security bureaucracy in Russia would be unlikely to offer Russian president Vladimir Putin a “vigorous debate” on policy approaches in the event of a confrontation, and that there would be little space for dissenting voices, particularly in a political system where all officials effectively serve at the pleasure of Putin and where there are few opportunities for officials who fall out of the political system. The human tendency to see the world as we wish to see it could, in this case, produce an echo chamber, making it less likely that policymakers would identify lurking dangers.

Russia’s ambassador to the United States, Sergey Kislyak, was in the audience and offered an extended objection to Simes’ and Allison’s characterization of the situation, saying that it was “mind boggling even to hear” talk of Russia in the Baltics. From Russia’s perspective, since the start of the crisis in Ukraine, there has been a “stark increase” in the presence of NATO forces around its borders, including aircraft in the Baltics and warships in the Black Sea. “We are not going to . . . be coerced militarily,” stated Kislyak. Kislyak criticized the notion that the crisis had isolated Russia, suggesting that the G7 was now less credible without Russia’s presence, and argued that Russia’s economy was not in shambles, saying that on all but a few metrics Russia was even doing better than Germany.

After Kislyak’s remarks, both Simes and Allison noted that perception gaps between countries can present a very real problem. Allison mentioned the “security dilemma,” a well-known concept developed by international-relations scholars in which one side takes actions that it regards as defensive, but the other perceives these actions as threatening. “What one side considers brinksmanship,” added Simes, “is viewed by the other side as a minimum appropriate response.”

F. Stephen Larrabee, who had served as a specialist on the Soviet Union in the Carter administration’s National Security Council, offered a similar reaction to Kislyak’s comments, noting that American officials asked about those maneuvers in the Baltics would say that they were reacting to Russian actions. “Both sides see themselves as justified,” he said, “as doing something defensive.” He warned that this presented a danger of a “spiral” of confrontation, but expressed concern that on the other hand Putin may be learning that risk-taking “works.” If America backs down now, he asked, “isn’t there a danger . . . that brinksmanship pays?”

Simes and Allison’s remarks drew upon “Stumbling to War,” an article they wrote in TNI’s just-released May/June issue. In the article, they further warned that the nuclear dimension of a potential U.S.-Russian confrontation must not be ignored. An “expanding group” in Russia’s national-security establishment believes that “Russia’s nuclear arsenal is not just its ultimate security blanket but also a sword it can wield to coerce others who have no nuclear weapons, as well as those who are unwilling to think the unthinkable of actually exploding a nuclear bomb.” Said Simes Tuesday, “President Obama and President Putin may genuinely believe that we are not on a dangerous track.” They may be wrong.

John Allen Gay, an assistant managing editor at The National Interest, is coauthor of War with Iran: Political, Military, and Economic Consequences(Rowman and Littlefield, 2013). He tweets at @JohnAllenGay.