Many people have become invested in the survivalist lifestyle as of late, and who could blame them? Every day you hear about another terrifying development in the world at large, whether it’s a threat of natural disaster, war, or simply some sort equipment malfunction that causes large scale destruction. The truth is that it’s very hard for families to feel any sense of peace or security in this day and age. These intangibles are hard to come by in a time when most people can’t even trust their next door neighbors.

For this reason, doomsday prepping has become quite attractive to those who want to be ready for anything. This includes occurrences such as natural disasters, economic collapses, and just about everything in between. One thing we can learn from the state of things today is that anything can happen at any moment, and those who are prepared for disaster will have a real advantage over those who are not.

For the most part, doomsday preppers are just ordinary people. Often they have families, and they genuinely fearful for their children’s future given the ever increasing instability present in the world. Preppers are comprised of various age groups, social statuses, political beliefs, and all ethnicities and philosophical outlooks.

The common thread amongst preppers is that they actively take precautions in the event of a disaster. This can include things like floods and tornadoes, enemy attacks with biological weaponsand similar tactics. The disaster needn’t be on a large scale to be threatening. Smaller scale disasters, which are more common due to the shifting economy, as well as odd weather patterns causing adverse conditions, can also be devastating.

Doomsday prepping is a lifestyle that is available to anyone who isn’t afraid of a little hard work and sacrifice. While we frequently hear of exorbitantly priced shelters and bunkers, this isn’t always the case. For a relatively reasonable sum of money, you can create your very own safe haven in the event of an attack, and this shelter can include all the items necessary to your survival until the initial threat subsides.

Shelter the Things You Love

Underground bunkers are quite popular with the survivalist set, and creating your own underground shelter is much more attainable than it seems. A bunker can be constructed for a relatively reasonable price. All you need to undertake the task are basic construction materials and some elbow grease. You can also enlist the help of a professional if you are unsure of how to go about constructing a safe and secure bunker on your own. There are many cost effective ways of building a bunker, it may just require a little research on your part.

The next step is to purchase supplies. Fortunately, most of the food you will need to buy is rather inexpensive. Canned items, like fruits and vegetables, are able to be purchased in large amounts for very little money. For this reason, when stocking your underground bunker you should definitely consider buying food in bulk. Foods such as rice, beans, and other staples are also available at extremely affordable prices. You may even want to consider stocking seeds to be used for planting when the time is right.

Water is equally important. Fresh water should be plentiful, but so should the means to purify unclean water should your source become depleted. This can be accomplished through chemical means, such as iodine tablets, or by purchasing a water purification system. Boiling water is also an option, but this can be difficult if you are left without the means to do so.

Clean Air is Crucial to Survival

While much is said about keeping adequate food and clean water supplies, little is ever mentioned regarding the quality of one’s air in a survival scenario. All over the world, terrorist groups and the like use biological and chemical weapons as a means of waging war. The effects of these weapons are long lasting. Chemical weapons typically have a faster onset, while biological weapons can cause untold suffering for years to come.

If you choose to go the underground bunker route, air purification should be a top concern, along with food and water. Bunkers tend to have insufficient ventilation, which can actually be beneficial depending on the air quality outside the bunker. However, insufficient air flow can be a detriment to those subsisting in a bunker, and can negatively impact health, as well as general quality of life.

For this reason, it’s crucial that air purification is part of your survival plans. An air purifier can be extremely beneficial to those in such situations. These devices can filter the air of harmful chemicals and agents, allowing you and your family to breathe easier, no matter where you may be. This is especially important if the disaster scenario is ongoing. You’ll want fresh, clean air at your disposal, and this can be afforded by an air purifier.

In order to be a fully functioning survival unit, a power generator is a must. Batteries are important for smaller items, such as flashlights and radios. But to power large items, such as the aforementioned air purifier, as well as things like cooking implements, heating systems, and other vital needs, you’ll need a larger, more reliable power source. Generators are great in this respect. A portable generator is the ideal, as you will be able to take it with your should your bunker become compromised.

Real safety is hard to come by these days for many reasons. Unrest is a fixture all over the world, due to economic collapses, brutal governments taking advantage of their citizens, as well as fringe groups threatening the very fabric of society. You can’t take risks like these lightly, given the state of the world today. Doomsday preppers face these risks head on through their various prepping methods. By being prepared for unforeseen circumstances, preppers can rest assured that they have a sound plan to follow in the event of unmitigated disaster.

Lauren Hill is new to prepping and very excited about the new things she has learned on her journey.  She finds great joy in sharing her discoveries with others.  Lauren is a contributing writer for RabbitAir. 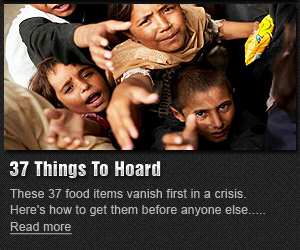 Shock FedGov Court Ruling: Police Can Kick In Your Door and Seize Guns Without Warrant or Charges