America is quickly approaching a catastrophic economic collapse. Before you dismiss this as hype or paranoia, take a few minutes to review the facts outlined on this page. The numbers don’t lie. At this point, the dollar crash is unavoidable… far from an exaggeration this is a mathematical certainty. As repelling as that sounds, it’s in your own best interest to learn just how bad the situation is.

According to the talking heads of mainstream press the economy is slowly recovering and the financial crisis is all but behind us. But we need a reality check. It’s time to stop being naive and start being more discerning. Instead of more false hope, we need the truth as bitter as it might sound… and the truth is, from our local municipalities, to our states to our federal government, we are broke… the truth is we can’t payback our debt without getting into even more debt… the truth is the housing crash of 2008 was just a small preview of what’s to come.

America is drowning in debt. The government’s liabilities are now growing at an exponential rate. Our national debt is on a vicious downward spiral.

To our detriment, our government continues to pretend that we can borrow our way out of debt and only a handful of our politicians are willing to admit that our nation is now bankrupt.

Contrary to rhetoric coming out of Washington, no tax hike or budget cut will get us out of this mess. The kinds of measures that would actually bring about meaningful change to curb the financial collapse are deemed too severe to be even considered.

Examine the evidence outlined below. Connect the dots and think for yourself.

“All truth passes through three stages.

First, it is ridiculed.
Second, it is violently opposed.
Third, it is accepted as being self-evident.”

What does the “national debt” even mean?

Let’s cover the basics first. When the government can not cover its spending using the collected revenues from 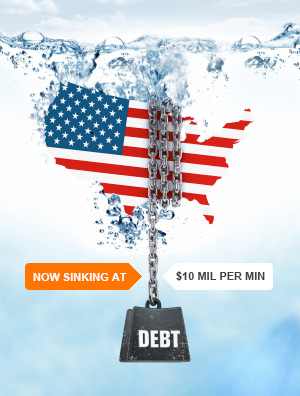 corporate and income taxes and other fees it imposes, it goes into debt. The U.S. national debt is the sum of all outstanding debt owed by the federal government. It includes the money the government borrowed, plus the interest it must pay on this debt.

Let’s also clear up the difference between debt and deficit. The deficit is the budget shortfall we have in any one year. If you take in $100 billion and spend $130 billion, you get a deficit of $30 billion. Now at the end of that year, you’ve got to do something with that $30 billion you owe, so you move it over to your long-term shortfall – which is the national debt.

Obviously, like any other debt, the national debt must be paid back to the holders. Of course, having a little debt is just fine as long as it’s manageable. On the other hand, if a country borrows too much it can drown in its debt, like Greece did.

So how bad is our situation? Numbers don’t lie, so let’s compare our debt and deficit to 1974 just to get a feel for our path and pace (later on we’ll look at national debt chart spanning 1940-2011).

However, since 1974, our deficit has gone from $4 billion to a shocking $1.33 trillion… stop and think about that for a second… this means that our current annual budget shortfall is roughly triple the size of the total U.S. debt in 1974.Our national debt in 1974 was $484 billion. It is now over $16 trillion!

How is that possible? How did we go through World War I, World War II, the Korean War, Vietnam War – and have only $484 billion debt, then skyrocket past 16 trillion in such a short time?! The answer to this question has to do with a key event in 1971 that we’ll go over in a moment. For now, let’s stick with the national debt, so we can understand why it is no longer sustainable.

In a letter to Thomas Jefferson, 1787

“All of the perplexities, confusion, and distress in America arises,
not from the defects of the Constitution or Confederation, not from want of honor
or virtue, so much as from downright ignorance of the nature of coin, credit, and circulation.”

Sixteen trillion dollars, so what?

Sixteen trillion dollars is certainly a lot of money, but most people usually don’t deal with that many zeros in their life. It’s hard to really appreciate this almost unfathomable sum and the dire consequences it represents for us. But to understand how deep of a hole the government is in, we need to grasp the enormity of this dollar amount.

So, how big is one trillion? Here are a few helpful illustrations.

Last one… If you had a trillion $10 bills and you taped them all end to end. Your money ribbon will become so long that you would actually be able to wrap it around planet Earth more than 380 times!!! But, that amount of money would still not be enough to pay off the U.S. national debt.

Are you getting the picture yet?

On the right is an illustration of our federal debt that might help you get a better idea visually. You can click on the image to see a larger size.

Keep in mind that what you are looking at are pallets of $100 bills stacked on top of each other. To give you an idea of the size and height of these pallets, in the center is standing the Statue of Liberty in proper scale relative to the money towers. The cash surrounding and dwarfing the Stature of Liberty taken together amounts to 16.394 trillion which represents the last debt ceiling.

It’s interesting to note that when we hit a debt ceiling, our government just moves the ceiling up to allow for the debt to grow. Now ask yourself, what is the point of a movable ceiling? A movable ceiling is an oxymoron. If you can move your debt limit on demand, why bother pretending that you have a debt limit in the first place?

“I see in the near future a crisis approaching that unnerves me
and causes me to tremble for the safety of my country. Corporations
have been enthroned, an era of corruption will follow, and the money power
of the country will endeavor to prolong its reign by working upon the prejudices
of the people, until the wealth is aggregated in a few hands, and the republic destroyed.”

Statistics the government would rather you didn’t know

Now that you have somewhat of an idea of how big a trillion is, consider the chart on the right (U.S. national debt from 1940 to 2011 in trillions of dollars) and look at the mind-boggling statistics below:

)
Hopefully at this point you’re starting to realize how big our debt is and how fast it’s growing. Shockingly, our government’s biggest liabilities are not even shown here, so this is just the tip of the iceberg.