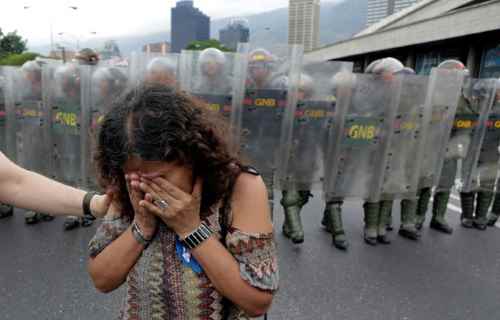 Venezuelan President Nicolas Maduro imposed a 60-day state of emergency Friday night, warning the citizens of “international and national threats against our fatherland” as the country is gripped by economic and political crises.

During a national broadcast announcing the declaration, the embattled heir of Hugo Chavez warned that “Washington is activating measures at the request of Venezuela’s fascist right, who are emboldened by the coup in Brazil,” referring to the ouster of Brazilian president Dilma Rousseff last week by opposition parties in the legislature.

U.S. intelligence officials told The Washington Post on Friday that Venezuela’s government could be overthrown by a popular uprising by year’s end, citing the deepening economic malaise and political deadlock. And the country’s woes are likely to only get worse:

In the last two years Venezuela has experienced the kind of implosion that hardly ever occurs in a middle-income country like it outside of war. Mortality rates are skyrocketing; one public service after another is collapsing; triple-digit inflation has left more than 70 percent of the population in poverty; an unmanageable crime wave keeps people locked indoors at night; shoppers have to stand in line for hours to buy food; babies die in large numbers for lack of simple, inexpensive medicines and equipment in hospitals, as do the elderly and those suffering from chronic illnesses.

When a state is in the process of collapse, dimensions of decay feed back on each other in an intractable cycle. Populist giveaways, for example, have fed the country’s ruinous flirtation with hyperinflation; the International Monetary Fund now projects that prices will rise by 720 percent this year and 2,200 percent in 2017. The government virtually gives away gasoline for free, even after having raised the price earlier this year. As a result of this and similar policies, the state is chronically short of funds, forced to print ever more money to finance its spending. Consumers, flush with cash and chasing a dwindling supply of goods, are caught in an inflationary spiral.

Fueled by the unrest, opposition parties swept into parliament in December’s elections and now seek a referendum to remove Maduro from power. The maneuver is permitted under Venezuela’s constitution, and the government-leaning electoral commission authorized petitions in April.

Since then, the coalition has accused electoral authorities of delaying verification of their petition’s signatures. An opposition march in Caracas on Wednesday to pressure the commission ended in skirmishes between stone-throwing protesters and Venezuelan soldiers, who fired tear gas to disperse the crowds.(source)

RELATED : “Bloodbaths” planned for 37 US Cities THIS FRIDAY