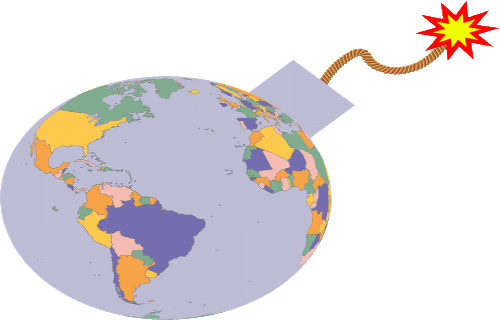 Major Economic Collapse Breaking News, According to the BBC Online, the Venezuelan government has just announced it will remove and void the country’s highest-denomination banknote from circulation within 72 hours to combat alleged contraband. Venezuelan Central bank data suggests there are more than six billion 100-bolivar notes in circulation, making up almost 50 percent or half of all currency.

Venezuelans will have 10 days from Wednesday to exchange the notes for coins and new, higher-value bills. Socialist President Nicolas Maduro said the move would stop gangs hoarding the notes. But in India, a similar move to scrap high-value bank notes last month has caused major civil disruption. A global financial war is declared on regular poor citizen, the central bank around the world can not maintain the excessive amount of free money e.g. Quantitative Easing in circulation afloat anymore without facing uncontrollable hyperinflation, the collapse of global fiat currency is accelerating as a free fall speed, the developing countries such as India, Venezuela and others will try to mandatory decrease its money supply by various aggressive methods, the E.U. and the United States of America soon will follow those foot steps, people need to prepare for a major financial reset in the near future, it could happen next year early spring right after the presidential inauguration. Stay Frosty and Take Care Everyone!! Here is the link for more information on Venezuela pulls highest-value banknote ‘to strike against mafia’.

The Venezuelan government has announced it will remove the country’s highest-denomination banknote from circulation within 72 hours to combat contraband.

Central bank data suggests there are more than six billion 100-bolivar notes in circulation, making up almost half of all currency.

Venezuelans will have 10 days from Wednesday to exchange the notes for coins and new, higher-value bills.

In a surprise announcement, Mr Maduro said on Sunday that the 100-bolivar note, worth about 2 US cents (£0.015) on the black market, would be taken out of circulation on Wednesday.

The president said the aim was to tackle transnational gangs which hoard the Venezuelan notes abroad, a move he has in the past described as part of the “economic war” being waged against his government.

He said the gangs held more than 300bn bolivares worth of currency, most of it in 100-bolivar notes.

President Maduro said there were “entire warehouses full of 100-bolivar notes in the [Colombian cities of] Cucuta, Cartagena, Maicao and Buaramanga”.

He said part of the plan was to block any of the 100-bolivar notes from being taken back into the country so the gangs would be unable to exchange their hoarded bills, making them worthless.

“I have given the orders to close all land, maritime and air possibilities so those bills taken out can’t be returned and they’re stuck with their fraud abroad,” he said speaking on television.

On the black market, its value dropped by 55% against the US dollar just in the past month, and the International Monetary Fund estimates that next year’s prices will rise by more than 2,000%.

Gangs can therefore buy up Venezuelan banknotes cheaply on the black market in exchange for dollars or Colombian pesos.

They then use the Venezuelan currency to buy subsidised goods in Venezuela, which they in turn sell at a profit in neighbouring Colombia.

Many Venezuelans living near the border buy Colombian pesos to purchase goods in Colombia which they cannot get in Venezuela due to chronic shortages.

RELATED : A Major Emergency Will Strike This Nation – Which Items Will Disappear First During A Major National Emergency?

EUROPE WANTS TO CONFISCATE GOLD AND CASH TO CRACKDOWN ON TERRORIST FINANCING. Just like India has done. What is it 200 grams allowed to be kept by women and 100 grams by men all else to be confiscated. BTW that only applies to jewelry not bars or coins.And even that is at the discretion of the Government Goons sent to search-and no warrants required for them. Add to that the removal of currency denominations in an “effort to curtail” the black market, and the Indians being taxed on anything (I think) over 200k in rupees as they rush to the banks to exchange(deposit) their cash holdings .

First Cash Ban, Now Europe Proposes Confiscating Gold To Crackdown On Terrorists. The UMich and the Conference Board consumer confidence models surged reporting that the illusion is complete and people believe the economy is improving. Case Shiller reports that housing prices have hit all time highs. ECB lowers Deutsche Banks capital requirements to that Deutsche Bank executives can receive bonuses. Monti de Paschi is experiencing a bank run of sorts as the bank is experiencing a rapid liquidity deterioration . The US is selling off some of it’s oil reserves under the pretense the funds will be used to refurbish the system. Europe is taking the next step, they are making the case why they need to confiscation gold, bitcoin and prepaid cards to crack down on terrorism funding .

Millions of Americans live in areas guaranteed to suffer a major, catastrophic earthquake within the next thirty years. Millions more live in areas vulnerable to savage hurricanes and floods. Still more Americans live  in areas vulnerable to terrorist attacks or “technological disasters” of our own making. Why are they there? What have they done to get ready for these disasters? Recent events in New Orleans, Mexico City and Haiti show how truly vulnerable we are, and how slow an effective government response will be. This book can help by walking you through a step-by-step process of planning, preparation and action that will help you get ready for the catastrophe you just know is coming. This book is useful for all those who wish to survive the coming catastrophe,and help their families and close friends to survive as well. Fortune favors the prepared. Get ready!