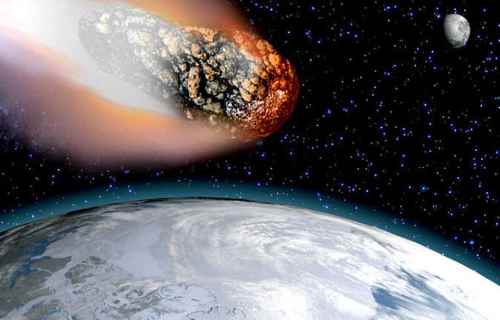 The claim that the U.S. government has information about an impending asteroid impact catastrophe, but is keeping the information secret to prevent mass panic, is spreading fast and causing growing anxiety among doomsday believers.
Following a series of warnings from doomsday prophets, there is increasing convergence of opinion among believers that an asteroid apocalypse will occur soon.
But while governments with privileged information are allegedly keeping the information secret, the “elite” are preparing secretly to survive the catastrophe, according to conspiracy theorists.
There are several versions of the predictions of asteroid impact apocalypse being generated and circulated by the online conspiracy theory rumor mill. But the separate strands have converged to strengthen conviction among susceptible individuals exposed to the constant bombardment of doomsday predictions that the asteroid apocalypse soon.
The growing mass hysteria appears to have originated with a self proclaimed “prophet,” Rev. Efrain Rodriguez, who claimed he sent a letter to NASA on Nov. 12, 2015, titled “Letter to the Space Agency… meteor heading toward Puerto Rico.”

In the letter, he claimed he had received a message from God that an asteroid that would “soon be seen in the alarm systems of NASA” was approaching. He said the asteroid would hit the ocean near Puerto Rico and cause a massive earthquake and tsunami that would devastate the East Coat of the U.S., Mexico, Central, and South America.
Warning against ignoring the message, he instructed NASA to issue an alert “so people can be relocated from the areas that are to be affected.”
Despite his letter to NASA, Rodriguez believed that the relevant agencies were aware of the impending catastrophe. He claimed that NASA had confirmed the trajectory of the asteroid and that President Barack Obama had been briefed. But the “rich and powerful” were making “plans to store food and build protective shelters” for themselves.
Following Rodriguez’s “prophetic” message, several other online groups erupted with a cacophony of related predictions and claims that have caused alarm and helped to heighten tensions over fears of an impending asteroid Armageddon. Rumors, fueled by online NWO conspiracy theory websites, claimed that FEMA was stocking up on body bags, coffins, and other emergency response supplies in preparation for a major catastrophe in Puerto Rico.

The rumors forced FEMA to issue a statement in 2016. The agency denied it was stockpiling body bags. The FEMA Caribbean Region Director, Alejandro De La Campa, said that it was normal for the agency to purchase and store relevant disaster response material and that it had not made any “extraordinary or unusual purchases” recently.
“FEMA is aware of speculation regarding the purchase of materials from around the United States, especially the Atlantic region. There is no specific threat, catalyst or alert behind the purchase of additional supplies.”
But FEMA’s efforts to counter growing fears of an asteroid catastrophe in Puerto Rico and along the East Coast of the U.S. mainland haven’t done much to stop spreading rumors that could spark mass panic.
With the conspiracy theory community looking out for “signs” of the impending catastrophe, the statement by the French Foreign Minister Laurent Fabius, in May, 2016, that the world had only “500 days to avoid climate chaos” was interpreted widely as a veiled asteroid impact disclosure statement, although in reality, the minister was only expressing hope that the United Nations climate conference that was scheduled to open in Paris, France, in November, 2016, would yield positive results.

Soon enough, a full blown end-time prophetic statement that originated from a number of sources in the end-time conspiracy theory community had identified December 23-24, 2016, as the asteroid impact apocalypse day.

RELATED : Dr. Michio Kaku WARNING – Nibiru Is Here – Prepare for Mass Extinction
The prediction was directly inspired by Fabius’s purported “veiled warning” that the asteroid apocalypse would occur in about 500 days. A number of “prophets” had simply grabbed their calculators and with the help of a calendar, and an estimate of 500 days to the apocalypse, determined that the asteroid impact would occur around the time of on the Jewish Day of Atonement in 2015, that is, on december 23-24, 2016.
As one of the end-time prophets stated, the authorities have “publicly announced… through the French foreign minister Laurent Fabius,” that apocalypse would occur in december, 2016.
“The governments of the world know that a very large asteroid will hit the earth on december 24, 2016, and they have publicly announced it already through the French foreign minister Laurent Fabius on May 13, 2016. They will attempt to nuke this asteroid, which will break it into smaller pieces that will reign down all over the earth causing massive destruction.”

The credibility of these prophecies among evangelical Christians was enhanced by the TV evangelist Pat Robertson, who predicted in April, 2016, that an asteroid impact would occur to fulfill the “prophetic words of Jesus Christ.”
“Hey, just get ready. Get right and stay right with the Lord. It could be next week, or it could be a 1,000 years from now, but nevertheless we want to be ready at whatever time the Lord says ‘I’m wrapping it up, it’s time to come home.’”
As conspiracy theorists count down to Armageddon, warnings continue proliferating.
The “elites” were preparing for the apocalypse by building underground bunkers and assassinating astronomers who could let the cat out of the bag and cause mass panic.
The impression that “something extremely strange is happening to our planet Earth” has been carefully nurtured by conspiracy theory websites such as Extinction Protocol, which assiduously document natural disasters around the globe.

And as if to confirm fears, NASA has announced it is staging a presentation of a “hypothetical asteroid impact scenario” at the 2015 IAA Planetary Defense Conference (PDC) to be held in April. According to NASA, the scenario, which is “completely fictional” but “realistic,” would consider possible responses by the world’s governments to “an steroid discovered on April 13, 2015, the first day of the conference, at magnitude 20.9, declination -39 degrees and heading south.”