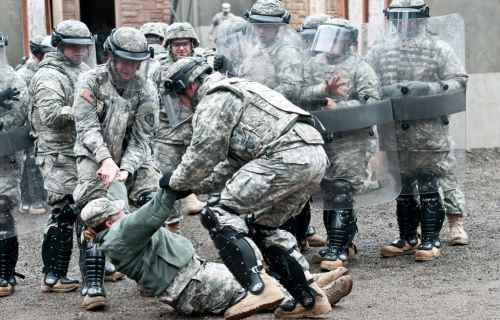 WHEN a State of Emergency is nationally declared, martial law will be “unofficially” enforced, whether that be due to an EMP, more man-made “natural” disasters, potential pandemic, a nationwide grid shutdown, nationwide banking glitch/”virus,” or any combination thereof. When this is the case, the Government’s forced solution to their controlled, caused demolition(s) and problem(s) will be to round up “political dissidents” — or who they deem “domestic terrorists” — into detention camps: also known as FEMA Camps. For the sake of “national security.”

RELATED : If They STEAL the Election on Tuesday, The American People Can Cripple This Country in Days and Collapse it Within Weeks,The Entire Country Would Grind To a Halt Within Days. Literally, Days! No Gasoline Deliveries, No Fuel. No Food Deliveries, No Food.

According to the information available, there are several reasons for the project: 1) Homeland Security needs an system of rapid deployment in the South, free of traffic;
2) certain gov’t agencies want an easy connection route with other gov’t installations in the South;
3) there is a move on in the intelligence community to begin more efficient use of the underground rail system already in place at Lockheed in Marietta;
4) Paulding is a central location for the complete project that will eventually connect installations in Anniston, AL; Macon, GA; Lockheed in Marietta; Lookout Mtn, TN; Greenville-Spartanburg, SC; & Raleigh-Durham, NC;
5) the Yorkville area of Paulding has been designated as the prime location for these hubs to come together because of geological preference;
6) the addition of new Walmart facilities in NW GA give spur hubs & depots easy access to large areas that can be partitioned off for moving of very large equipment & large numbers of people in case of national emergency.

President John Kennedy signed several Executive Orders which would allegedly give certain dictatorial powers to the appointed elite in the event that a “National Emergency” should be declared by the President — whichever president is sitting in office at the designated time. At the president’s discretion “in any time of increased international tension or economic or financial crisis”, the Executive Orders could theoretically be enacted.

Then, on February 27, 1962 Kennedy signed Executive Order 11051: designating FEMA as the authorized agency to implement the above orders, and which authority can be re-designated by the original authority.

Here are more Executive Orders — all of which pave the way for FEMA Camps to be instituted within America:

Couple that with all of the government and military documentation as it pertains to prison camps, labor inmate programs, national emergency centers, and even extremism — and you’ve got yourself an Agenda at hand.

These FEMA Camps are located nationwide — with well over 800 of them functioned, fully furnished, and highly secured. But don’t be fooled! These “camps” are also being built under disguises, and are planned to be functioned in areas such as abandoned malls/warehouses, shopping centers, and Government-run entities such as schools, libraries, post offices, and even military bases.

However, locations will also include places such as Walmart. There is even evidence showing the building and funding of underground tunnels, which will connect these Walmarts and stores alike to underground military bases and FEMA Camps, in preparation for mass-evacuation come martial law. Chances are, when martial law IS declared and emergencies DO occur, Walmart may be one of the only stores available “for your shopping needs.”

RELATED : Warning Something Big Is About To Happen In America The MARTIAL LAW Is Coming – 100% Chance It Will Happen
It was issued in 2005, well before the current legislation of its predecessor. Signaling that the effort was not sidelined or mothballed, in January 2006, Kellogg, Brown and Root reported that they had received a contract from the Department of Homeland Security to expand these internment camps.

The government is determined to keep information about its FEMA concentration camps as secret as possible. This was demonstrated in December, 2010, when TruTV inexplicably pulled an episode of Jesse Ventura’s Conspiracy Theory dealing with FEMA camps and fusion centers.

It is not certain H.R.390 will make it out of committee and become law.

But its reintroduction on the end of this year reveals a sincere desire on the part of the establishment to put a martial law detention infrastructure in place, especially now as the economy continues is danse macabre and the prospect of revolution grows within the United States.

“MY SURVIVAL FARM”
…and it’s like nothing you’ve ever seen before… An A to Z guide on survival gardening that is easy to read and a joy to put into practice, full of photos, diagrams and step by step advice. Even a kid can do this and, in fact, I encourage you to let the little ones handle it, to teach them not just about self-reliance but also about how Mother Nature works.

Here is just a glimpse of what you’ll find inside:

How to plan, design and put into action high-yield survival garden that will literally keep you and your family fed for life, no matter what hits you, even when everyone else around you is starving to death. No digging and planting year after year and no daily watering because you’ll have more important things to worry about when TSHTF.

How to set up highly nutritious soil for your plants. Do this before you plant anything and you’re on your way to setting your food forest on auto-pilot for decades to come. I’m gonna tell you this one “weird” thing to add to the mulch that’s not only highly effective but also 100% free (because you already have it in your home right now).

How to “marry” your plants. We’re gonna tell you which grow well together and help each-other survive and thrive, so they don’t ever compete for sunlight and nutrients. You get the full table of plants that work well with one another as well as the ones you should NEVER be put together. (Source)

Are You Ready For Forced Vaccination, RFID Chips And FEMA Camps ?

Breaking News: The New World Order Are Fighting Back With Anti Trump Protesters! Any Gun Control Legislation Will be Later Followed by The Abolishment of Personal Gun Ownership and a Campaign of Gun Confiscation