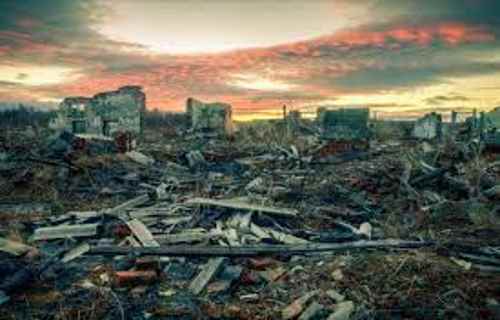 This escalating regional war is also designed to be the 3rd Millennium’s version of World War III. However, it will in no way engage the world community of nations the way that WWI or WWII did. This particular type of “world war” is being staged for maximum effect and with quite deliberate design. That’s because the true director of this ongoing horror flick — “Armageddon Now” — is quite well hidden behind the curtain putting the finishing touches on the final scheme take. Both he and the producers, along with the screenplay writers, are all comfortably sequestered far from the Syrian rifle shots and missiles, Iraqi bombings and mortars.

RELATED : It’s Getting Scary… Russia Baiting and The Risk of Nuclear War

Obama said it is necessary to “keep sanction Moscow in place until it fully complies with the ceasefire agreement in Ukraine.”

Waszczykowski said: “We have to reject any type of wishful thinking with regard to pragmatic cooperation with Russia as long as Russia keeps on invading its neighbors.”

These statements are propagandistic. If those who made the statements actually believe them, they are too imbecilic to be trusted with public offices.

Is it possible that the Czech general does not know that Russia has used its military only to repel a Washington-inspired Georgian invasion of South Ossetia and against ISIS in Syria, which the US, UK, and France also claim to be doing? After repelling the Georgian invasion, Russia withdrew its forces. After dealing ISIS a setback in Syria, Russia withdrew and was forced to return by Washington’s resupply of ISIS.

Can the Polish Foreign Minister identify the countries that “Russia keeps on invading”?

Emmott and Siebold report that “Russian aggression” is the reason NATO is deploying 3,000 to 4,000 troops in the Baltic states and Poland. In other words, something that does not exist–Russian aggression toward the Baltics and Poland–is assumed to be a fact that must be countered with military deployments.

And now Obama wants to remove whom was holding this beast and take it out of the way. Obama’s plans started by launching the Arab Spring headed by America’s Muslim guide, himself. What seemed to be the powers holding the spirit of Antichrist at bay, was being taken out of the way, as Tunisia, Egypt, Libya, and Yemen were toppled and then plunged into a dark quagmire of terrorism and sectarian violence. The hopefuls were blamed and the villans got away with all the evil they can muster.

Why PUTIN is the TRAITOR of the NEW WORLD ORDER!!?? (2016 DOLLAR COLLAPSE and tension on SYRIA !

The ignorance and stupidity of the American people will destroy the world.

Little wonder that Vladimir Putin, the only responsible world leader other than the president of China, is desperate that the Western media understand that their irresponsible negligence to the truth is helping Washington drive the world to nuclear war.

Putin does not want war. He is doing everything in his power to avoid it. But Putin is not going to surrender Russia to Washington. The trip-point of World War III will be the installation of Washington’s missiles in Poland and Romania. As Putin recently made clear to the imbecilic Western journalists, these missiles can easily and secretly be changed from anti-ballistic missiles to nuclear attack missiles that can strike their Russian targets within 5 or fewer minutes of launch, thus depriving Russia of its retaliatory deterrent. Once these missiles are in place, Washington can issue orders to Russia.

Whatever the evil men in Washington who are gambling with the life of the planet think, Russia is not going to accept these missiles.

PUTIN exposes USA! All American People Need to see this! Please share with urgency. This is very important to share! TV News is showing more proof! This is TV News! This is real facts. The power of Internet/YouTube is helping American people!
RELATED : The Coming World War 3 Storm – World War 3 is About to Begin: 120 Countries Amassing Troops! – What Are The best Tactics To Survive in a War? – ‘What to do if War Breaks Out’
RELATED : THE SKILLS THAT WILL REALLY MATTER AFTER SHTF
RELATED : IF SHTF THESE 17 ITEMS WILL BE WORTH THEIR WEIGHT IN GOLD

When Russia announced it would wipe out any Saudi or Turkish forces moving into Syria, that looked like a nuclear threat. To counter it, Turkey was prepared to steal the NATO nuclear arsenal at Incirlik Air Base, 84 thermonuclear weapons.

This plan had long been underway with Saudi specialists trained in defeating the weapon safeguards based on stolen nuclear secrets secured from Israel, something Israel deeply regrets now, we believe.

Israel, also out of short sightedness, had upgraded Turkish F16s for service as nuclear bombers to use against Russia, perhaps not to “use” as such, but to blackmail Russia into backing down when Syria was overrun.

7 thoughts on “Expert Dr Paul Craig Roberts Warning Real Possibility of Armageddon : WE ALL MIGHT BE DEAD SOON – Why PUTIN is the TRAITOR of the NEW WORLD ORDER!!?? (2016 DOLLAR COLLAPSE and tension on SYRIA !)”