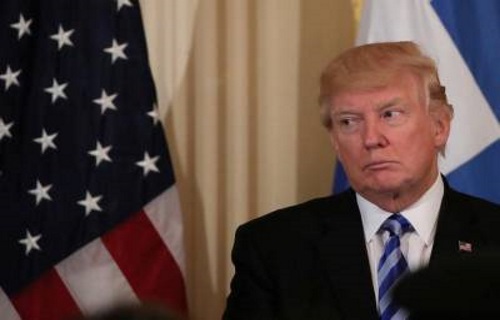 Trump Prepares Carrots for Russia Ahead of Hamburg, Brandishes Stick at China

But these ‘carrots’ are gift-wrapped American-style, and no one knows whether they are fresh and edible

For long-time observers of the US-Russia-China triangle, this week presents a fantastic panorama. Much as the G20 summit in Hamburg on July 7-8 ponders over the great issues of growth in the world economy, the limelight will fall on what happens on the sidelines when US President Donald Trump holds ‘bilaterals’ with Russian President Vladimir Putin and Chinese President Xi Jinping.

En route to Hamburg, Xi arrived in Moscow on Monday on a state visit. The Chinese commentaries  have presented the partnership with Russia in effusive terms as the number one foreign-policy priority for Beijing. (People’s Daily, Global Times) Xi himself extravagantly praised the quality of the Sino-Russian strategic partnership.

On the other hand, there was no matching rhetoric from the Russian side. Moscow is instead approaching the Putin-Trump meeting with great expectations and is single-mindedly focusing on that event. The official media highlighted with barely-concealed glee that there will be a “full-fledged ‘sit-down’ meeting” between Putin and Trump on July 7. Moscow heaves a sigh of relief that Trump is crossing the Rubicon, finally, despite the relentless pressures over his ‘Russia connection’.

Washington has held out three ‘carrots’ to Moscow. One, the Republican Congressmen in the House of Representatives stalled the debate/vote on the sanctions bill passed by the Senate against Russia; two, Washington is dangling the prospect of returning the two Russian properties unlawfully confiscated by President Obama in December.

Three, importantly, snippets of a conversation between US state secretary Rex Tillerson and UN Secretary-General Antonio Guterres last week have been ‘leaked’ to the media, signalling US willingness to let Russia take the lead in Syria in finding a solution to the conflict.

Of course, these ‘carrots’ are typically gift-wrapped American-style, and no one knows whether they are fresh and edible. It will take a while for the Kremlin to know for sure. Trump probably is waging ‘psywar’ on Beijing. The point is, if Trump administration offered 3 carrots to Russia, it has brandished three sticks at China – US plan to sell $1.42 billion worth weapons to Taiwan; sanctions for keeping business ties with North Korea; and, US Senate Armed Services Committee approval of a bill for US naval vessels to make regular stops at Taiwan ports.

China initially took the ‘sticks’ on its stride. But then, on Sunday, the ground shifted dramatically when USS Stethem, a guided-missile destroyer based in Japan, sailed within 12 nautical miles of Triton Island, which is part of the Paracel Islands located in the South China Sea between China and Vietnam. Curiously, Trump, the deal maker, phoned Xi on Monday – probably to get a sense of the play in Beijing. According to the Xinhua news agency, Xi told Trump upfront that China-US relations stand “affected by some negative factors.”

At any rate, in a sharp editorial on Tuesday, China Daily blamed the Trump administration for “raising tensions between the two militaries.” It pointed out,

The latest provocation shows Trump is yet to discard the strategy of stirring up confrontation in the South China Sea adopted by his predecessor. Such a practice is both dangerous and counterproductive because it could easily throw China-US relations off balance and squander the fruitful results achieved so far in advancing bilateral cooperation.

To be sure, at the weekend meeting in Hamburg with Trump, Xi will first want to figure out whether there has been “a reversal in the US’ China policies a some are claiming.” (China Daily).

That makes the score card this weekend difficult to predict. Putin probably will be the only ‘winner’. Trump can’t afford to go back empty-handed from Hamburg. And he is also facing the wrath of the hostess at the G20 summit – German Chancellor Angela Merkel. Putin has a fair chance of leveraging US-China tensions.

But then, count on him to also make sure that Xi gets the space to negotiate effectively with Trump. The ‘takeaway’ from Xi’s visit to Moscow has been Russia’s full unequivocal support for the Chinese stance on the North Korea problem. Don’t be surprised if the consummate deal-maker in the White House over-reached. (Source: Indian Punchline) 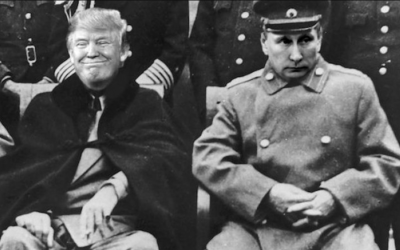 As Trump prepares to meet with Russian President Vladimir Putin on the sidelines of the upcoming G20 summit in Hamburg, Americans (“preppers” excluded, since they are already amply prepared) are frantically stocking up on canned beans and shotgun slugs.

There is absolutely no doubt in anyone’s mind that the pillars of western civilization (NATO, CNN) will self-destruct if Trump so much as half-smiles at Putin during their scheduled encounter in Germany.

This self-explanatory truth was verbalized by none other than John McCain’s voluptuous daughter during Fox News’ critically-acclaimed program, “Boring People Sit and Talk”.

Meghan McCain’s candid advice to Trump? “Be vigilant. If you smile too much, hug, and behave too friendly with Putin” everyone will go bananas.

Can you imagine the headlines if Trump and Putin respectfully greet one another? “KGB PAPA BEAR GETS COZY WITH YOUNG CUB”; “SMILEGATE: MUELLER CONFIRMS PROBE INTO TRUMP’S FACIAL EXPRESSIONS”; “THE HANDSHAKE THAT MURDERED THE US CONSTITUTION”; etc. etc. 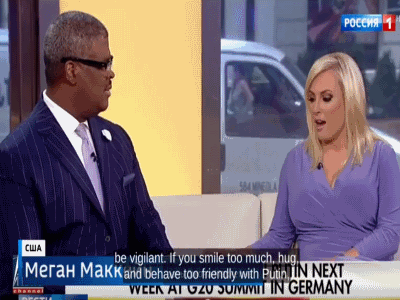 Putin undoubtedly recognizes the tremendous power that he now possesses. Imagine if he gives Trump a playful slap on the ass? Rachel Maddow would jump out the nearest available window.

We’re not even being facetious. The great and beautiful irony of RussiaGate is that as a result of nonstop, around-the-clock Russia baiting, a simple wink from Putin in the general direction of Trump would probably ignite riots and bank runs across the United States. Also, NATO’s high command would probably commit mass seppuku.

We’re not saying Putin should do this. We’re just saying.