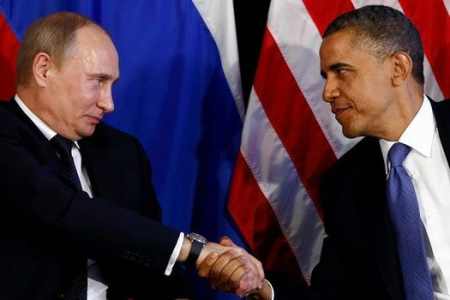 I am continually astonished at the refusal of many otherwise intelligent people to consider the evidence or even the possibility that there is, in reality, no fundamental political or philosophical conflict between the power brokers of the East and the West. As I outlined in great detail inRussia Is Dominated By Global Banks, Too, the truth is they are both working toward the same goal; and both ultimately benefit from an engineered and theatrical display of international brinksmanship.

Russia, like the United States, is utterly beholden to globalist financiers through organizations like the International Monetary Fund and the Bank for International Settlements. Russia’s global economic adviser in matters ranging from investment image to privatization is none other thanGoldman Sachs.

Goldman Sachs has also worked closely with the Ukrainian government since 2011, and it started its advisory work with Ukraine for free. (Whenever Goldman Sachs does something for free, one should take special note.)  Banking elites have been working both sides of the fence during the Russia versus Ukraine charade.

Russia has continued to borrow billions of dollars from Western banks, including Deutsche Bank and Credit Suisse, year after year, proving that they are not averse in the slightest to working closely with “evil Western robber barons”.

Russian President Vladimir Putin meets with Mr. New-World-Order himself, Henry Kissinger, on a regular basis; and according to Putin’s press secretary, they are “old friends.” Putin’s meetings with Kissinger began almost immediately after he first took power in 2000.

Putin’s relationship with Kissinger has been so pronounced that the Russian Foreign Ministry gave Kissinger an honorary doctorate in diplomacy, and Putin placed Kissinger at the head of a bilateral “working group” — along with former KGB head and multilateralist (globalist) Gen. Yevgeny Primakov — dealing with foreign policy.

In more recent news, I would also remind pro-Putin cheerleaders that Putin and the Kremlinfirst pushed for the IMF to take control of the Ukrainian economy, and the IMF is now demandingthat Ukraine fight Russia in exchange for financial support. This might seem like irony to more foolhardy observers; but to those who are aware of the false East/West paradigm, it is all the part of a greater plan for consolidation of power.

Clearly, Putin and Russia are just two more puppet pieces on the globalist chessboard, pitted against other puppets in the West in a grand theater designed to distract and divide the masses through chaos. As Kissinger points out, in crisis there is opportunity.

What is the goal? They’ve already told us, openly, on numerous occasions.

The first great prizes of the New World Order are a global currency and centralized economic control.  The elites are not satisfied with quiet dominance of individual economies.  They want complete political homogenization and the end of all sovereignty.  Period.  With a global currency in place, the steps towards global government become quick and small.

Heads of state from around the world, including Putin, as well as international bankers and IMF representatives have all publicly called for the IMF to take charge of the global economic system through its Special Drawing Rights currency program.

However, for the SDR to become a dominant currency, certain issues must be resolved. Here’s a short list.

The U.S. Dollar Must Fall

The dollar must lose its world reserve status, and most likely collapse in relative value, before the SDR can be elevated. This is where mainstream pundits lose track of the facts. For them, the dollar is an invincible monetary element, a currency product as infinite as time. Their normalcy bias prevents them from ever acknowledging the many weaknesses of the Federal Reserve note, including our country’s inability to ever service its more than $200 trillion debt. Others believe the dollar is the NWO currency, and that the globalists are somehow U.S.-centric. The evidence posted above suggests otherwise. Globalists have no loyalty to any nation or culture. Their only loyalty is to the progression of their own power. If sacrificing the dollar or the U.S. as a whole furthers that power, then they will have no problem cutting us loose like a rotting appendage.

A Liquidity Replacement Must Be Introduced

As my regular readers know, I have been covering China’s progression toward a decoupling from the U.S. economy for years. China, in my view, has always been the key to the elitist shift into a truly global currency mechanism. The primary argument in the mainstream against the idea of a dollar collapse is that there is no other currency with ample liquidity to take the dollar’s place. Well, in the past couple of years, this has changed.

China and the banks it controls have issued approximately $25 trillion in debt instruments and monetization. This is often referred to as a “debt bubble” created through panic and a weakness in China’s economy and a response to slowed quantitative easing in the United States.  I would take a slightly different position.  China began issuing Yuan denominated debt instruments in 2005, years before the mainstream had any inkling of the impending derivatives collapse.  From then up to today, there has been no practical purpose for China to produce these Yuan denominated equities and securities, unless their target has always been to expand the Yuan market in a covert way.

I would say that China’s monetization has been carefully and deliberately engineered in order to lay the foundation for a massive liquidity spike in the Yuan. The argument that China’s incredible debt generation is a sign of impending collapse may be misguided. U.S. debt, including unfunded liabilities, absolutely dwarfs China’s $25 trillion. China’s Yuan debt has barely had time to accrue concrete interest.  The U.S., on the other hand, is caught in an endless cycle of interest payments that are slowly but surely eating away the skeleton of our fiscal structure.  If any economy is on the verge of implosion, it is that of the United States, not of China.

The Chinese need exponential Yuan circulation. They do not want the Yuan to replace the dollar; instead, they are preparing it for induction into the IMF’s Special Drawing Rights basket.  With China set to become the world largest economy this year according to World Bank, their inclusion is assured.

The IMF holds an international conference and policy meeting on the SDR every five years. During these meetings, the IMF decides if it will absorb a new currency into the basket and if it will expand the creation or circulation of SDRs around the world. Interestingly, the next IMF conference on the SDR just happens to be scheduled for the end of 2014 to the beginning of 2015.

Another strange coincidence: The U.S. Congress was supposed to vote on legislation for further capital allocations to the IMF by April. The vote never came. The new allocations were to fund an expansion of IMF programs and help with the greater inclusion of BRIC nations in governing decisions. If the U.S. government does not pass this legislation, Russia and other nations have demanded that the IMF move forward without the United States on reforms. At the very least, the U.S. would lose its veto power over IMF decisions. I believe that the timing of this is deliberate, that the U.S. is meant to lose its veto power and that the simultaneous SDR conference will announce the inclusion of the Chinese Yuan, setting the stage for the replacement of the dollar as world reserve.

The SDR will not immediately be issued as a commonly traded currency itself. Rather, the IMF will take over management of included currencies and denominate those currencies using SDR valuations. For example, $1 U.S. is worth only .64 SDR today. In the near future, I expect that the dollar will plummet in relation to the SDR’s value. We will still have our greenbacks when the IMF begins administrating our currency system, but the international and domestic worth of those greenbacks will fall to pennies. In turn, other currencies with stronger economic positions will rise in worth relative to the SDR.

I believe one of the primary determinations in a currency’s value compared to the SDR will be a country’s stockpile of gold. This is why Russia and China in particular have been purchasing precious metals at an unheard-of rate (and why U.S. gold reserves have never been audited). The IMF itself is one of the world’s largest holders of physical gold, with nearly 3,000 metric tons (officially). With the crash of the dollar system and investors clamoring for a reliable hedge to protect whatever savings they have left, gold could conceivably skyrocket into the $5,000 to $10,000 per-ounce range. Governments holding the metal will be favorably placed during an implementation of the SDR as the new reserve standard.

A Cover Event Must Be Created

The centralization of power is best achieved during moments of bewildering calamity. The conjuring of crises is one of the oldest methods of elitist dominance. Not only can they confuse and frighten the masses into malleability, but they can also ride to the public’s rescue as heroes and saviors later on. The Hegelian dialectic is the mainstay of tyrants.

The destruction of the dollar and the institution of a global economic bureaucracy are not actions that can be executed openly by international financiers. These events will coincide with extreme catastrophe, likely worse than the Great Depression era, with millions upon millions of people losing the ability to financially support themselves and their families. Crime, death and public discontent will surely follow. People will be looking for someone to blame. This is where the false East/West paradigm comes in.

It is widely expected that as sanctions snowball between Russia and the U.S. that the dollar will end up on the chopping block.  China has asserted its support for Russia in opposition to NATO interference in Ukraine.  The stage has been set.  I have warned for quite some time that the development of East/West tensions would be used as a cover for a collapse of the dollar system. I have warned that among the American media this collapse would be blamed on an Eastern dump of foreign exchange reserves and treasuries, resulting in a global domino-effect ending U.S. world reserve status. In turn, the international community would be conditioned to see this as the mere bumbling of a spoiled America gone power-mad, rather than the result of a covert program of economic destabilization. This might lead to all-out war or a fiscal firestorm that leaves much of the world crippled and desperate for aid.

In either case, the elitist plan is to use scapegoats and false enemies to draw our attention away from the real culprits: the international banks themselves. Make no mistake: This fight is not about President Barack Obama, it is not about Putin and it is not even about the Federal Reserve. These men are tools, errand boys, public mascots. Do not be fooled by the global stage play being perpetrated. Whatever happens in Ukraine and whatever happens between Russia, China and the West, there are only two real sides to this battle: the elitist establishment, and those who are smart enough to recognize their poison.

Alt-Market is an organization designed to help you find like-minded activists and preppers in your local area so that you can network and construct communities for mutual aid and defense.  Join Alt-Market.com today and learn what it means to step away from the system and build something better.