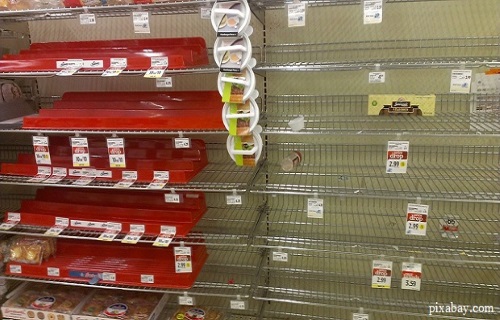 The worst has happened. Just look how hard Texas was hit by Harvey Hurricane.

Disaster has struck and you were caught flat-footed and unprepared. Or maybe you were prepared, but didn’t stockpile enough, or your supply was compromised.

First, if you were caught without any type of prepping, you should have been prepared, and are now learning the hard way why! But, that’s spilt milk, so the only place to look is forward. Fortunately, there are a few tricks.

Nowhere in this list will you find any method that suggests that you steal from your neighbors, loot stores, or ransack empty houses. And if you do, unless we’re in the middle of an apocalypse and those people are dead or gone for good, then shame on you.

And be aware that if you do get caught, it may not be by the police – you may find yourself looking down the wrong end of the owner’s .45.

Before you get all high and mighty about this, let me remind you that grocery stores regularly throw out perfectly good food because it’s a couple of days old or, in the case of power outages, have to throw all perishable goods out due to policy. The kicker here is that they’re not even allowed to give it away for free.

If the power goes out for more than just a half-day or day, or whatever, they generally have a CYA policy that, even though the food is still semi-frozen and people are standing at their doors going hungry, they have to pitch it.

So, dumpsters behind grocery stores are a great place to store perfectly good food. A word of warning here, though: If you’re digging through meat, don’t take any that isn’t still at least cold, especially fowl. Salmonella is not your friend.

This a good place to score produce, milk, bread, frozen foods, baked goods, or deli items for free. But keep an eye out and be there as soon as employees can make it back to the store, because they’ll be throwing everything out immediately.

Food pantries typically try to stock up before a storm because they know that people are going to need help. Unlike the commoner, they have a relationship with local grocery stores and can get meat, produce, and bakery items that are a day or two old or are otherwise not ideal to sell at the store, but are still perfectly edible.

These Are The Ingenious Recipes That Helped Our Ancestors Stay Alive!

Just as with grocery stores, be there as soon as you can get there, because they’ll run out fast.

These two places are typically targeted as drop-spots for food and water because it’s a given that everybody there has nothing and the entire goal of a shelter is to provide a safe haven for people in need.

Soup kitchens are the same, though they will often run out quickly either because the food was compromised or because so many people show up with empty bellies after a disaster.

Local farmers tend to be a generous lot, and also often have generators to keep them from losing all of their produce, which are their livelihood as well as their own food source.

You’ll often find these set up along the road offering produce and home-canned goods, and maybe even eggs and bread, or search for one on USDA website. Sometimes they’ll be giving food away, but usually you’ll pay for it. If it’s a little extra, that’s sort of what you get for not being prepared.

The county, state, and federal government emergency response teams will designate specific locations where they will portion out food, water, ice, and often paper goods, hygiene items, and clothes.

These spots may even be equipped with phones so that you can contact loved ones, a food or barbecue area, and air-conditioned or heated areas where you can get out of the weather for a few minutes. Their resources are considerably vaster, but they’re not unlimited, especially in the first few days post-disaster.

There’s always going to be a few restaurants that have backup generators and/or use gas stoves so that they can operate even without electricity.

When Hurricanes Charley and Ivan went through, I was living in Southwest Florida and working as a waitress. We were one of only a handful of restaurant in ten miles that was open because we had a generator and gas stoves.

The owner, a brilliant man, saw the opportunity coming and stocked up on food right before the storms, opened as soon as the roads opened, and made an absolute killing even though he sold most everything at a discount.

I lived close and was able to make it to work. Let me tell you, those few days when there was no power were some of my most profitable of my entire stint there.

So, if you have money, some local restaurants will likely be open if it’s a disaster like this. Also, even if they can’t open, they’ll likely go in to clean out the freezers, so their dumpsters will be full, too.

You can also possibly get lucky enough that they’ll give it to you instead of wasting it or sell it to you.

Do you have a friend who had the foresight to stockpile but had damage to his home? Consider trading your spare bedroom or couch for some of his food.

You may also be able to barter with neighbors who need help clearing trees or stabilizing porches or roofs – your work in exchange for food.

This isn’t an option that is available to or feasible for everyone, but if you happen to live in an area that is abundant with berries, nuts, and wildlife, and you’re equipped and knowledgeable enough to hunt or gather, then this may be an option for you.

If you don’t know what you’re doing, you’re better off skipping this step because one berry will feed you, but another may kill you.

These are about the extent of places that you’ll be able to find food after a SHTF situation, so you better be ready to beat other people in your shoes to the punch by being out and on patrol early. The takeaway here is that you’re going to be stuck either going through dumpsters or paying – often through the nose – for food at restaurants or from roadside stands.

If you can’t make it on your own, know where your local shelters are and keep an ear out for designated food and water allocation stations.

If you’re without food because you were unprepared or underprepared, don’t make the same mistake twice. There’s really no place that isn’t susceptible to some sort of disaster – hurricanes, blizzards, tornadoes, floods – so don’t be caught unaware.FIFA World Cup Qatar 2022

If you’re unfortunate enough to find yourself in need of food after a disaster, at least learn your lesson: know what to do and where to find food by researching food sources in advance!

Food Rationing: It Will Break You Down Mentally