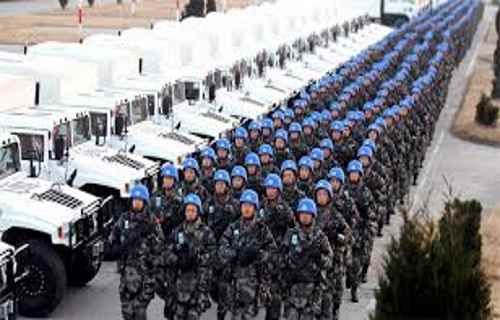 GEORGE SOROS SAYS RIOTS POLICE STATE AND CLASS WAR-Did the US Just Agree to Allow the Foreign Troops Within the UN to Police the Streets of the USA?

Billionaire George Soros has made new prediction for the US. While it might be as dire as it gets for the financial wiz, this bet concerns more than just the value of the buck. According to Soros, there’s about to be an all-out class war.

Soros, 81, previously bet against the British pound in the early 90s and made $1 billion off its collapse. In the years since, he’s remained active in investing, but also in advocacy. He’s helped keep Wikipedia afloat thanks to impressive contributions and through donations to the Tides Center, has indirectly funded Adbusters, the Canadian anti-capitalist magazine that put Occupy Wall Street on the map. Speaking to Newsweek recently, Soros neglected to acknowledge his past successes, but instead offered a word of warning: a period of “evil” is coming to the western world.

“I am not here to cheer you up. The situation is about as serious and difficult as I’ve experienced in my career,” Soros tells Newsweek. “We are facing an extremely difficult time, comparable in many ways to the 1930s, the Great Depression. We are facing now a general retrenchment in the developed world, which threatens to put us in a decade of more stagnation, or worse. The best-case scenario is a deflationary environment. The worst-case scenario is a collapse of the financial system.”

Soros goes on to compare the current state of the western world with what the Soviet Union was facing as communism crumbled. Although he would think that history would have taught the globe a thing or two about noticing trends, Soros says that, despite past events providing a perfect example of what is to come, the end of an empire seems imminent.

“The collapse of the Soviet system was a pretty extraordinary event, and we are currently experiencing something similar in the developed world, without fully realizing what’s happening,” adds Soros.

Back in 2012,  George Soros made an ominous prediction for America.  He offered a word of warning: a period of “evil” is coming to the western world.  He went on to say, “I am not here to cheer you up. The situation is about as serious and difficult as I’ve experienced in my career,” Soros told Newsweek. “We are facing an extremely difficult time, comparable in many ways to the 1930s, the Great Depression. We are facing now a general retrenchment in the developed world, which threatens to put us in a decade of more stagnation, or worse. The best-case scenario is a deflationary environment.  The worst-case scenario is a collapse of the financial system.”

Soros goes on to say that as the crisis in the Eurozone only worsens, the American financial system will continue to be hit hard. On the way to a full-blown collapse, he cautions, Americans should expect society to alter accordingly. Riots will hit the streets, says Soros, and as a result, “It will be an excuse for cracking down and using strong-arm tactics to maintain law and order, which, carried to an extreme, could bring about a repressive political system, a society where individual liberty is much more constrained, which would be a break with the tradition of the United States.”(Source)

RELATED : The New World Order Is The Enemy Of Humanity – Is Almost Complete WW3 & Depopulation Coming

“The Strong Cities Network will serve as a vital tool to strengthen capacity-building and improve collaboration,” said Attorney General Loretta E. Lynch.  “As we continue to counter a range of domestic and global terror threats, this innovative platform will enable cities to learn from one another, to develop best practices and to build social cohesion and community resilience here at home and around the world.”

The Strong Cities Network (SCN)  – which launches September 29th at the United Nations – will empower municipal bodies to fill this gap while working with civil society and safeguarding the rights of local citizens and communities.

The SCN will strengthen strategic planning and practices to address violent extremism in all its forms by fostering collaboration among cities, municipalities and other sub-national authorities.

“To counter violent extremism we need determined action at all levels of governance,” said Governing Mayor Stian Berger Røsland of Oslo while commenting on their participation in the SCN.  “To succeed, we must coordinate our efforts and cooperate across borders.  The Strong Cities Network will enable cities across the globe pool our resources, knowledge and best practices together and thus leave us standing stronger in the fight against one of the greatest threats to modern society.”

The SCN will connect cities, city-level practitioners and the communities they represent through a series of workshops, trainings and sustained city partnerships.  Network participants will also contribute to and benefit from an online repository of municipal-level good practices and web-based training modules and will be eligible for grants supporting innovative, local initiatives and strategies that will contribute to building social cohesion and resilience to violent extremism.

The SCN will include an International Steering Committee of approximately 25 cities and other sub-national entities from different regions that will provide the SCN with its strategic direction.  The SCN will also convene an International Advisory Board, which includes representatives from relevant city-focused networks, to help ensure SCN builds upon their work.  It will be run by the Institute for Strategic Dialogue (ISD), a leading international “think-and-do” tank with a long-standing track record of working to prevent violent extremism:

“The SCN provides a unique new opportunity to apply our collective lessons in preventing violent extremism in support of local communities and authorities around the world”, said CEO Sasha Havlicek of ISD.  “We look forward to developing this international platform for joint innovation to impact this pressing challenge.”

“It is with great conviction that Montréal has agreed to join the Strong Cities Network founders,” said the Honorable Mayor Denis Coderre of Montreal.  “This global network is designed to build on community-based approaches to address violent extremism, promote openness and vigilance and expand upon local initiatives like Montréal’s Mayors’ International Observatory on Living Together.  I am delighted that through the Strong Cities Network, the City of Montréal will more actively share information and best practices with a global network of leaders on critical issues facing our communities.”(Source)

8 thoughts on “GEORGE SOROS SAYS RIOTS POLICE STATE AND CLASS WAR- Did the US Just Agree to Allow the Foreign Troops Within the UN to Police the Streets of the USA?”