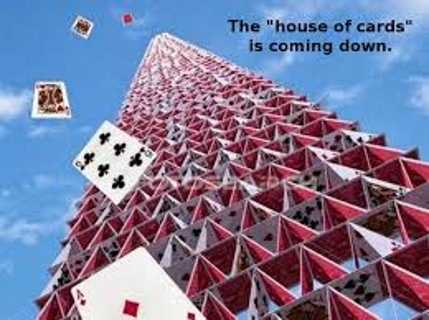 Gerald Celente joins the show today to decode current world events and give his take on what the oligarchs are discussing at Bilderberg.

The truth is that middle class U.S. consumers are tapped out.  Most families are just scraping by financially from month to month.  For most Americans, there simply is not a whole lot of extra money left over to go shopping with these days.

In fact, at this point approximately one out of every four Americans spend at least half of their incomes just on rent…

More than one in four Americans are spending at least half of their family income on rent – leaving little money left to purchase groceries, buy clothing or put gas in the car, new figures have revealed.

A staggering 11.25 million households consume 50 percent or more of their income on housing and utilities, according to an analysis of Census data by nonprofit firm, Enterprise Community Partners.

And 1.8 million of these households spend at least 70 percent of their paychecks on rent.

The surging cost of rental housing has affected a rising number of families since the Great Recession hit in 2007. Officials define housing costs in excess of 30 percent of income as burdensome.

For decades, the U.S. economy was powered by a free spending middle class that had plenty of discretionary income to throw around.  But now that the middle class is beingsystematically destroyed, that paradigm is changing.  Americans families simply do not have the same resources that they once did, and that spells big trouble for retailers.

As you read this article, the United States still has more retail space per person than any other nation on the planet.  But as stores close by the thousands, “space available” signs are going to be popping up everywhere.  This is especially going to be true in poor and lower middle class neighborhoods.  Especially after what we just witnessed in Baltimore, many retailers are not going to hesitate to shut down underperforming locations in impoverished areas.

And remember, the next major economic crisis has not even arrived yet.  Once it does, the business environment in this country is going to change dramatically, and a few years from now America is going to look far different than it does right now.(source)

China equity funds took in $4.6bn from overseas over the past week, according to data from EPFR released on Friday, more than double the previous high set in the second quarter of 2008. At that time, Chinese stocks were in the middle of long and painful downturn after the popping of the 2007 stock market bubble.

A note from Credit Suisse adds to the heat, saying “the market direction has clearly detached from underlying fundamentals.” 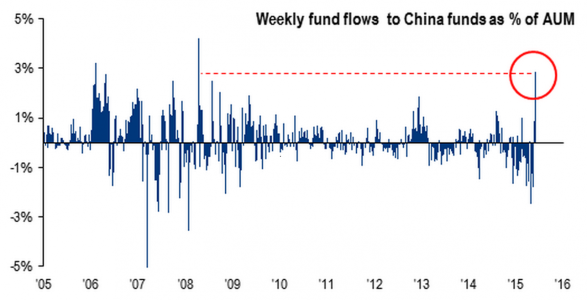 London Capital Group analyst Ipek Ozkardeskaya said on Thursday that “the economic conjuncture and companies’ performance in China and elsewhere have little to do with the stock prices we see currently on our screens.” Capital Economics added: “With valuations divorced from economic fundamentals, the heightened volatility we have seen is likely to continue.”

Technical indicators (percentage deviation from 200 day moving average and the relative strength index) are at among the most stretched levels in at least 15 years and comparable to the 2007 China A-shares bubble.

David Scutt at Business Insider Australia notes that not long after Friday’s open, Chinese shares plunged by about 5%, adding to the 6.5% collapse recorded Thursday. In total, that was a swing of more than 11%. 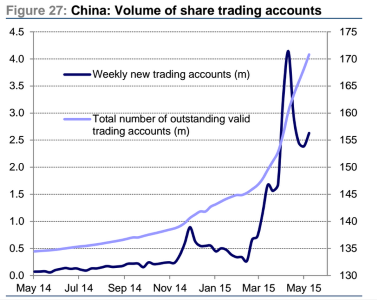 Usually in markets any drop of 10% or more is considered a “technical correction.” For stocks to make that move in just a few hours of trading is a major deal. That the index then came back to make up those gains again (it closed down just 0.15% for the day) shows just how choppy things are.

A colossal number of new trading accounts are being opened in China, sparking fears about who exactly is trading and how well equipped they are to do so.

Those fears were compounded in March when a report suggested that 6% of China’s new equity investors couldn’t even read.

Whatever happens next in Chinese markets, you can expect a bumpy ride.(source)

Gerald Celente – “Economic Panic? No. “All Is Well” Says Obama”

Gerald Celente – Markets Slump? Get Ready for War ( The Collapse Has Already Begun. Watch Out For China! )