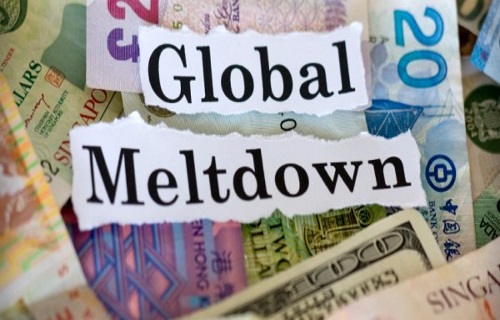 The Global Elite Secret Plans For The Next Financial Crisis

I stated in this article that an “imminent disaster.US stock markets”, and that “people seem to have forgotten one central and critical point. Most people seem to believe that they have to lose a great deal of money when crises materialize and forget that it is absolutely possible to prosper during crises as well.
Thus, because they feel they must suffer during a crisis, the ‘shoot the messenger of bad news’ syndrome commences.

Now that the US markets have traded between a range for several days, the mass media is bombarding everyone again with a “it’s a great time to buy more US stocks!” narrative that will prove to be poison to any retail investor foolish enough to swallow these sales pitches.
If you don’t understand how Central and Commercial bankers are manipulating these markets to manufacture “up” days to grant the appearance of market recovery amidst great structural fragility, then I recommend that you visit a lot of the referenced links in this article, where you can find a lot of detailed information and analysis about how bankers manufacture these illusions with manipulated rigging. To allocate any of the money you earn on the basis of empty banker promises of higher asset prices without understanding the risk-reward metrics of doing so is NO strategy at all, but instead a risky proposition based entirely on hope.

According to Rickards, the next crisis will likely be a continuation of the 1998 hedge fund collapse and the 2008 banking collapse. He estimates that it will occur around 2018.
As Rickards explains, the ’90s were a period of risk and instability for hedge funds. Eventually, Wall Street had to bail out hedge fund managers. Then, in 2008, central banks had to bail out Wall Street.

In both instances, global financial markets nearly ground to a halt. They were rescued at the last minute by government and banking interventions. And the underlying problems that cause these crises were never solved.

Rickards points out that it has been about eight years since the last financial crisis. These events tend to reoccur in eight- to 10-year intervals. Until now, the government has intervened during crashes by printing money. This provides liquidity and prevents bank runs.

The US stock market crash.
After an initial period when the US stock markets sold down by about 17%. Shortly after this initial strong sell-off, the market actually rose slightly for several weeks, invoking the perpetual salesmen employed by global investment firms to declare that the correction was over and that it was time to start buying US stocks again. This is the period I’ve circled in green above. After many were lured backed into the US stock markets, they finally crashed hard in October. If you look at the US stock market selloff to this point today, I believe that we are currently in that period , a period of relative calm before a stronger, more devastating dive occurs.

In Greece, which currently has over one million unemployed citizens, firms have started paying workers in kind, mainly with supermarket coupons.

According to the latest unemployment statistics for the EU member states, prepared by Eurostat, the youth unemployment rate in Greece had remained at around 50 percent in the years 2016 to 2017, and there are no indications the situation may improve in the near future.

o it’s the end of the WORLD and you need to buy something, only problem is your money’s no good here anymore! So what can you do? Well, if you prepared in advance, you may have a few options yet…