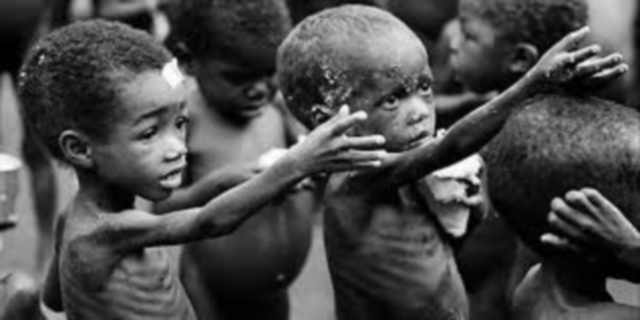 Market Skeptics is reporting that a food crisis in 2015 is inevitable, and it’s going global. In 2015  the impending disaster, how governments around the world will react, and what it means for food prices. And if you’re a skeptic, Mr. deCarbonnel provides a host of references from around the country and the world.

“If you read any economic, financial, or political analysis for 2014 that doesnt mention the food shortage looming next year, throw it in the trash, as it is worthless. There is overwhelming, undeniable evidence that the world will run out of food next year. When this happens, the resulting triple digit food inflation will lead panicking central banks around the world to dump their foreign reserves to appreciate their currencies and lower the cost of food imports, causing the collapse of the dollar, the treasury market, derivative markets, and the global financial system. The US will experience economic disintegration.

Over the last two years, the world has faced a series of unprecedented financial crises: the collapse of the housing market, the freezing of the credit markets, the failure of Wall Street brokerage firms (Bear Stearns/Lehman Brothers), the failure of Freddie Mac and Fannie Mae, the failure of AIG, Icelands economic collapse, the bankruptcy of the major auto manufacturers (General Motors, Ford, and Chrysler), etc. In the face of all these challenges, the demise of the dollar, derivative markets, and the modern international system of credit has been repeatedly forecasted and feared. However, all these doomsday scenarios have so far been proved false, and, despite tremendous chaos and losses, the global financial system has held together.

The 2014 Food Crisis is different. It is THE CRISIS. The one that makes all doomsday scenarios come true. The government bailouts and central bank interventions, which have held the financial world together during the last two years, will be powerless to prevent the 2014 Food Crisis from bringing the global financial system to its knees.

So far the crisis has been driven by the slow and steady increase in defaults on mortgages and other loans. This is about to change. What will drive the financial crisis in 2014 will be panic about food supplies and the dollarâs plunging value. Things will start moving fast.”

Remember what happened when the price of gas hit $4 and oil was selling at $140 a barrel? Some economic analysts suggest this was the straw that broke the camel’s back in 2008 and lead to a meltdown in the US stock markets. Imagine, for a minute, what happens to our economy if/when the price of food were to triple in a matter of a couple of months. All available funds that a family has would be directed to food supplies, bringing the rest of the economy to a virtual standstill. As deCarbonnel mentions, any such shortage in food would bring an almost immediate response from central banks around the world causing a possible total collapse of an already overinflated and weakened US Dollar.

We urge our readers to read the article in full and get informed, but for those who want the main bullets, here are some items for consideration:

Dynamics behind the crisis

“The world experienced a catastrophic fall in food production as a result of the financial crisis (low commodity prices and lack of credit) and adverse weather on a global scale.

Normally food prices should have already shot higher months ago, leading to lower food consumption and bringing the global food supply/demand situation back into balance. This never happened because the United States Department of Agriculture (USDA), instead of adjusting production estimates down to reflect decreased production, adjusted estimates upwards to match increasing demand from china. In this way, the USDA has brought supply and demand back into balance (on paper) and temporarily delayed a rise in food prices by ensuring a catastrophe in 2015.”

“The USDA by manufacturing the data needed to keep supply and demand in balance has ensured that agricultural commodities are incorrectly priced, which has lead to overconsumption and has guaranteed disaster next year when supplies run out.”

“The world is blissful unaware that the greatest economic/financial/political crisis ever is a few months away. While it is understandable that general public has no knowledge of what is headed their way, that same ignorance on the part of professional analysts, economists, and other highly paid financial “experts is mind boggling, as it takes only the tiniest bit of research to realize something is going critically wrong in agricultural market.”

“The USDA is terrorized by the implications of higher food prices for the US economy, most likely because it knows the immediate consequence of sharply higher food will be the collapse of the US Treasury market and the dollar, as desperate governments and central banks dump their foreign reserves to appreciate their currencies and lower the cost of food imports.Fictitious USDA estimates should be seen as proof of the dire threat posed by higher food prices, as the USDA would not have turned its production estimates into a grotesque mockery of reality if it didn’t believe the alternative to be apocalyptic.”

“the media has been reporting two distinctly, contradicting realities. One of these realities is filled with record crops and plentiful supply, and the other is filled agricultural devastation and ruin. It has been a mad, frustrating experience to read about agricultural disasters and horrendous crop losses in virtually every state combined with predictions of a US record harvest, sometimes in the same article.”

“Farmers cant be going bankrupt across the US thanks to the worst harvest season ever seen while at the same time producing the USDA’s Biggest Crop Ever! Someone is lying, and evidence supports the farmers story.”

We have often discussed the BS coming out of Washington and Wall Street in regards to the economic crisis. Does anyone have any doubt that the USDA would engage in the same wag the dog, doublespeak propaganda games as the rest of our leaders?

If he is correct in his assessment that global food production and storage is in a significant crisis, then perhaps holding some food reserves would be in order.

If you’re hoarding gold/silver, but have failed to build your food reserves, remember this: you can’t eat your gold! And chances are, if the SHTF and there is no food on store shelves, no one will want to trade the most precious of commodities for gold or silver, especially at the onset of a food crisis.

“The true financial crisis begins when the world realizes that there are couple months food supply missing from 2014. The last two years were a gentle, mild preview of the real thing…”

“The sudden, shocking discovery that food supplies are running out will produce total panic. The reaction will be inventory building  hoarding at all levels. Major food producing nations will export bans (India has already banned food exports). Producers, Middlemen, And Households will rush the acquire supplies. All this hoarding will worsen the crisis by throwing supply and demand further out of balance: export bans cut supply available on international market and inventory building increases demand. Food prices will more than double.

There is no precedence for the panic and chaos that will occur next year. The global food supply/demand picture has NEVER been so out of balance. The 2010 food crisis will rearrange economic, financial, and political order of the world, and those who arent prepared will suffer terrible losses”

For a complete review of the coming 2015 Food Crisis, including references and news stories related to food production, USDA Disaster areas and ways to protect yourself.