Growing baby ginger in the home garden sure sounds interesting; but isn’t ginger a tropical plant that’s not suitable for the climates here in the U.S.? Well not exactly, farmers and gardeners across the country are discovering that they can raise a crop of fresh ginger under a wide range of conditions and climates!

I first gave the idea of growing ginger in the vegetable garden serious thought a year ago when I met Susan Anderson of East Branch Ginger at a PASA Farm Conference. The thing that immediately caught my eye was the gigantic, plump clusters of seed ginger on display at her booth.

Pre-Sprouting to Get a Good Start with Growing Baby Ginger

Of course my immediate question was “Can you really grow ginger here in PA?” Susan spent the following twenty minutes telling me all about cultivating baby ginger and the potential that this crop has for production here in the U.S. I was sold on the spot and determined that I would try raising some baby ginger in my backyard that summer.

I placed an order a couple weeks after the conference and received a box containing the seed ginger that was shipped directly from Hawaii in early March. Enclosed were detailed cultivation instructions, and I later received follow up emails inquiring how the ginger was doing and offering further information and additional growing tips.

The cultural information and follow ups were welcomed since this was my first time growing ginger, but it turns out that this is a fairly easy crop to raise in the home garden. You begin by pre-sprouting the seed indoors during late winter or very early spring. I used shallow flats filled with coir, a plastic humidity dome over them to help retain moisture, and a germination mat underneath to provide gentle warmth.

Care and Culture of Ginger in the Home Garden 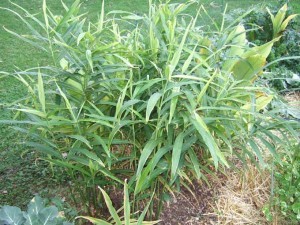 The seed slowly germinated and after a few weeks shoots began appearing above the soilless growing media that they were planted in. The ginger was next transplanted into individual containers where the plants continued to grow alongside the light cart that I use for starting my vegetable seedlings. They did just fine indoors until conditions were okay to harden the plants off and move them out into the garden.

Susan had mentioned a variety of growing methods for cultivating baby ginger that included container culture, using hoop houses, or planting ginger in the open garden. I decided to experiment with each option but the bulk of my plants were destined to be treated like any normal vegetable in my raised bed garden.

I’ll even confess to not following all the advice and recommendations that came from East Branch… “heavy feeding,” hmm, I figured my garden’s soil was fertile enough, “hilling the plants,” well I didn’t get around to that either; but it was a good growing season with adequate rain, warm temps, and plenty of sun. I did make sure that the weeds were kept under control and checked regularly for any signs of insect infestations or disease; neither of which was ever an issue.

The ginger plants continued carefree and as the months passed I had no clue as to how well the rhizomes were growing below the soil’s surface. My expectations were pretty low because the plants were over four feet tall but otherwise rather unassuming. Towards the end of summer when the other summer crops were fading the ginger remained in the garden and seemed unaffected as conditions cooled and the days grew shorter. 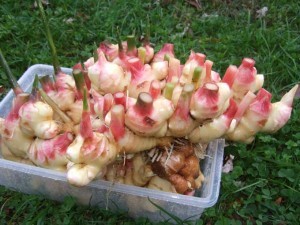 When I finally got around to digging the plants during early autumn I was surprised and impressed by how well the crop had produced! There were huge hands of baby ginger spread out underneath of those tall bamboo-like shoots. The overall production was even greater than I saw from the gourmet garlic crop that season. The ginger planted in containers was just as productive if not more productive than what was raised directly in the garden.

Baby ginger is much different from the mature ginger that you find at the grocer. The harvested crop was white with pink tips and accents and lacked the tough tan skin or fibrous flesh that you get from commercial ginger. Baby ginger has a more decidedly tender texture but definitely delivers that distinct ginger flavor and bite that you are familiar with. Maybe a tad milder, homegrown baby ginger makes a perfect substitute for the store bought variety. 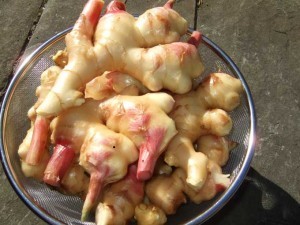 There is no curing necessary and the crop can be used as soon as it is harvested. I sliced and dried part of the harvest but my favorite way to preserve it was to simply clean it, place in plastic bags, and pop it into the freezer. Later it’s a snap to remove individual pieces from cold storage and grate them right into your favorite dishes for kitchen uses.

I highly recommend growing baby ginger as an interesting and productive crop for the home garden. I’ve already ordered more seed from East Branch Ginger, and this time around I intend to abide more strictly to the cultural recommendations to see if I can raise an even more impressive crop this coming season!

There’s More than One Way to Grow Mushrooms

Q and A: How To Create A Garden For Your Community

Video: 4 Ways To Protect Your Plants From Frost