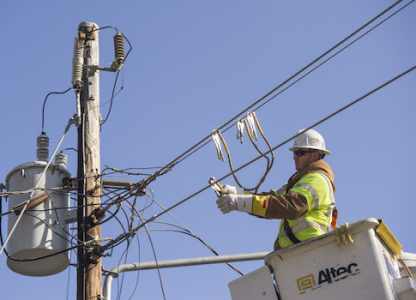 Experts on Capitol Hill Thursday warned that an electromagnetic pulse (EMP) attack aimed at the nation’s electrical grid could leave the majority of Americans dead.

The hearing, “Electromagnetic Pulse (EMP): Threat to Critical Infrastructure,” before the House Homeland Security Committee’s Subcommittee on Cybersecurity, Infrastructure Protection, and Security Technologies explored the effects an EMP would have.

“Some would say it’s low probability, but the damage that could be caused in the event of an EMP attack, both by the sun, a solar event, or a man-made attack, would be catastrophic,” said Rep. Michael McCaul (R., Texas). “We talk a lot about a nuclear bomb in Manhattan, and cybersecurity threat to the power grid in the Northeast, and all of these things would actually probably pale in comparison to the devastation that an EMP attack could perpetrate on Americans.”

Rep. Trent Franks (R., Ariz.), who has worked to raise awareness on the issue for years, testified during the first panel that “catastrophic civilian casualties” could result unless Congress acts.

An overload of radio waves to electric systems, an EMP could result from a natural disaster, such as a solar storm, or a terrorist attack. Franks said “every single facet of modern human life” would be “crippled” by such an event.

“It strikes at my very core when I think of the men, women, and children in cities and rural towns across America with a possibility of no access to food, water, or transportation,” he said. “In a matter of weeks or months at most, a worst-case scenario could bring devastation beyond imagination.”

Franks told the Washington Free Beacon that while the nation’s critical defense assets, including nuclear defense capabilities, are currently protected against an EMP, the civilian grid is “almost entirely vulnerable.”

“The civilian grid, in my judgment, is very vulnerable,” he said. “Some of the largest transformers, the very largest ones, have an inherent resistance to all but the more intense electromagnetic pulses. But the fact is, we have enough of those mid-range transformers where a major event would be catastrophic.”

To protect the civilian grid against an EMP event, Franks has introduced H.R. 3410, the Critical Infrastructure Protection Act, which would enable the Department of Homeland Security (DHS) to implement practical steps to protect the electric grid.

Dr. Michael J. Frankel, a senior scientist at Pennsylvania State University, said Franks’ bill is a “necessary first step” for the defense of the electric grid. The bill currently has 19 cosponsors.

The issue is an urgent one, said Dr. Peter Pry, a member of the Congressional EMP Commission and executive director of the Task Force on National and Homeland Security, who testified that an EMP event could wipe out 90 percent of America’s population.

“Natural EMP from a geomagnetic super-storm, like the1859 Carrington Event or 1921 Railroad Storm, and nuclear EMP attack from terrorists or rogue states, as practiced by North Korea during the nuclear crisis of 2013, are both existential threats that could kill 9 of 10 Americans through starvation, disease, and societal collapse,” he said.

Subcommittee Vice Chairman Scott Perry (R., Pa.) said that America’s adversaries may already have the ability to launch an EMP attack, which could be achieved by dropping a nuclear warhead miles above the electric grid.

“Currently the nations of Russia and China have the technology to launch an EMP attack, and we have speculated that Iran and North Korea may be developing EMP weapon technology,” Perry said. “This is why we must remain vigilant in our efforts to mitigate the effects of an EMP attack.”

Franks told the Free Beacon that Americans are unaware of the devastation that would occur if the country experienced a solar storm similar to the Carrington Event. Named after British astronomer Richard Carrington, Carrington is the biggest solar storm on record, and took place in 1859.

“If a Carrington event happened now, it’s an unthinkable, almost cataclysmic event,” Franks said. “What people don’t realize, we’re so used to things we think, ‘Oh, well power goes down for a week and it usually comes back up.’ And most of the reason it does is because of a lightning storm. Well, lightning is EMP. Lightning is E2.”

“We have put a lot of hardware-based protections against lightning over our grid installations,” he continued. “Even so, we still once in a while have some extended damage for a few days. But it almost always comes back.”

“The thing that people don’t realize is it’s the length of the blackout that begins to make it dangerous,” Franks said. “Everybody thinks, ‘Oh, well we’ll go outside and we’ll build a campfire and we’ll have a nice evening at home, we’ll break out the candles, it’ll be nice.’ A couple of days like that is okay. A week like that might be okay.”