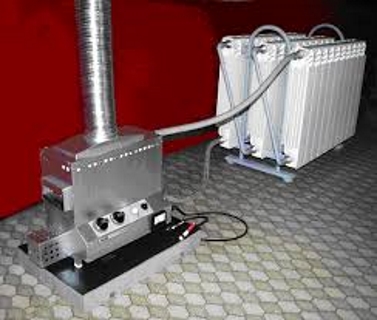 Newly designed thermoelectric power generators (TEG), will operate at an industry leading 7-8% efficiency. Our research goal is to increase that to 10% net efficiency. First prototype elements were tested in February 2009 with some success. The new element design will eventually be manufactured on automated equipment, making them the first to be manufactured using full automation.
The new elements are very high power in the 100 to 200 amp power range. The cost to produce these elements should be lower than present elements in large quantities with greater power output ability. Our goal is to supply industrial facilities and Car Manufactures with turn key Thermo Electric Power Generators (TEG) systems to reclaim valuable waste heat and convert it directly into electric power.
The next phase of development will involve contact and how to effectively lower electrical and thermal resistance. The phase will begin in April 2014. We expect over the next 2 years to have our first full scale prototypes.

This is a water to water design we did for a client at a camping lodge. He’s heating a glycol closed loop with a wood stove for the hot side and cooling the cold side with water from his lake. The TEG power generator system was designed to heat trace his water line so it didn’t freeze in the winter. There is a reservoir storage unit for en-between when his stove is not working that he uses to maintain the heat in the water/glycol loop. The power is enough to run the pump and also lights in his cabin. We are in the process of designing off the self TEG power generation devices for purchase. Cost is always a factor. To make them more affordable we will be offering standard Thermo Electric Power TEG Generators in 20 watts @ 12-14VDC (max.). Either water or air cooled. These will use the Seebeck Effect to produce power!

Adjacent is a 40-45 watt liquid to liquid TEG based on a Delta T of 110-120 C. Max hot side temperature is 190 C. Hot liquid is passed via the center sink and cold water is passed via both outside sinks.
Belleville washers are used to assemble the sinks and modules to the correct compression rate. Six screws are used with Belleville washers . Modules leads are left lose to allow for the client to hook up any power configuration required. 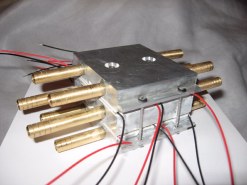 Thermo electric power generation is a maintenance free way to generate power. As long as there is a heat source and a cold source power is continuously produced.
Unlike a solar panel rated at 100 watts which, my produce only 60% of the rated power output because of sunshine and weather impairment. A thermo electric power generator will produce it rated output as long as the delta T remains the same, 24 hr. a day 365 days a year using the Seebeck Effect.

These are extrusion profiles we are attempting to work with . Figure of merits are high giving us hope that we can automate our manufacturing process and bring costs down to a competitive level.

Our new Powder Metallurgy process if successful, will increase efficiency 20-30% over standard modules, together with modules specifically designed for high density power generation we expect thermo electric modules that will be not only more efficient but be economical enough in volume to have mass commercial applications. So far we are very encouraged by the test results. We are expecting to finalize patented TEG design by January 2014. If the new process is successful we will entertain any companies interested in licensing our technology to contact us for more information. At present we have successfully designed new Thermo Electric elements and have tested them with great success. We are now working on the conductor contacts. If successful the complete couple can be produced in four steps. The elements can be configured into any size power cell required by our customers. Our standard elements are 150 to 200 amp which is unheard of in the industry.

Beginning in the summer of 2012 , Thermal Electronics Corp. will be designing and manufacturing component and generators which can generate electricity for:

Thermoelectric Power Generators will be configured into 12 VDC to 24 VDC units and 15 watts to 220 watts as standard designs . Custom designs will be available, but with greater lead times and cost.

How to Build a Small-Scale Hydroelectric Generator

HOW TO MAKE A GAS MASK: BASIC PRINCIPLES AND METHODS (DIY Items Which can Potentially Save Your Life in Case of a Disaster)