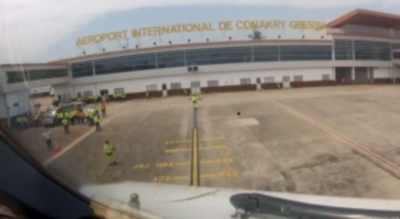 International flights are still operating in and out of Conakry airport despite more deaths overnight from Ebola Zaire.

Eight more Ebola deaths have occurred overnight, and nine more are deaths are suspected to have been caused by the disease though lab results are yet to be announced.

Liberia has now confirmed that their suspected cases are Ebola and they are expecting the death toll to rise. All the deaths are from the Zaire strain, the most serious of the five known strains of the disease.

This outbreak is unusual because ALL other cases have been further east and south in Africa, the track of the disease appears to be moving northwest.

Large public gatherings in Conakry, the capital of Guinea have been cancelled over fears of further spread.

Senegalese singer Youssou Ndour cancelled Saturday’s concert in Guinea’s capital Conakry because of the outbreak. he told the BBC:

”It would not be a good idea to bring hundreds or thousands of people together in an enclosed area.”

The health minister of neighbouring Senegal has confirmed that the land border between Senegal and Guinea is closed and will remain so until further notice.

Conakry has an airport with terminals for both domestic and international flights. According to TripAdvisor 17 airlines operate out of Conakry, and a minimum of 119 international flights leave the airport each week. Only nine go direct to other cities, leaving 110 flights that stop at other airports en route.

Direct flights from Conakry to Paris take off several times each week with Air France running a regular service.

Numerous airlines operate  a London Heathrow flight with a stop in Europe, usually Paris before the short hop to London

EIGHT airlines operate a Conakry to New York service with a stop in Europe before continuing across the Atlantic.

Bookings are still being taken on all the main sites today. I managed to get flights without any warnings or advisories appearing. Had I not failed to pay I would be the proud owner of several tickets that would drop me right in the middle of the hot zone by the end of this week. Then of course they would fly me back home at a later date…

It needs pointing out that bodily secretions includes sweat, that comes into contact with cuts or grazes or makes contact with the eyes or mucus membranes. Repiratory spread has been proven and documented between animals, even different species of animals. 13 cases of Ebola have been found since 1976 where respiratory transmission is a distinct possibility as there was no contact with infected food, contaminated clothing or contact with any other victim in the outbreak.

Years of Big pharma not investing in drug research for Ebola has left us at the mercy of a disease that could literally wipe out 90% of the people on the planet if it starts to spread unchecked.

The reason they won’t do the research is costs. The cost of developing a drug would not pay for itself because outbreaks of the disease are generally small and more often than not contained due to the remote geographical locations involved.

Well Conakry is not remote, it is the capital city of Guinea and as I type international flights are both landing and taking off. Today to Casablanca, Paris, Dakar, Nouakchott and Abidjan.

Let’s hope only happy memories and photographs are brought back from Guinea, because the alternatives are too horrific to contemplate.

You can read more about Ebola here