It hasn’t moved in three years, but the symbolic Doomsday Clock’s minute hand could be about edge closer to midnight.

The Bulletin of the Atomic Scientists (BAS) will host a live international news conference on Thursday to reveal its latest decision regarding the minute hand of the clock.

The last time the clock’s minute hand was adjusted was in January 2012, when it pushed ahead one minute, from six to five minutes before midnight. 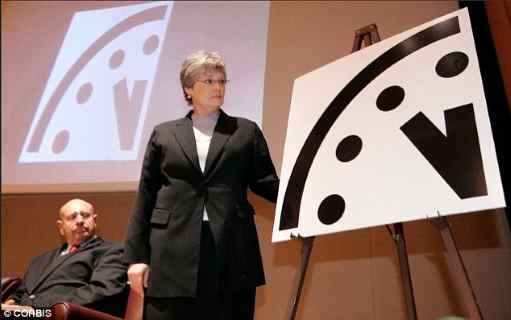 Tick tock: Here Kennette Benedict, executive director of the Bulletin of the Atomic Scientists (BAS), is shown unveiling the New Doomsday Clock during a news conference in 2007. The BAS has said it will host a live conference tomorrow to reveal the Science and Security Board’s decision regarding the clock’s minute hand

It is expected that key topics to be discussed at the event will include evidence of accelerating climate change, terrorism and nuclear modernisation.

The BAS was founded in 1945 by University of Chicago scientists who had helped develop the first atomic weapons in the Manhattan Project.

The physicists set up the Doomsday Clock in 1947 after their atomic bombs hit Hiroshima and Nagasaki at the end of World War II.

Their Clock was created to convey threats to humanity and the planet. Midnight represents Doomsday, or when these threats will peak and cause a global catastrophe. 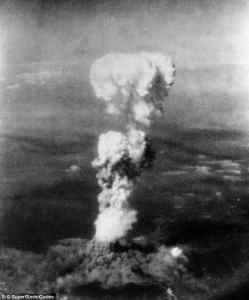 The BAS was founded in 1945 by University of Chicago scientists who had helped develop the first atomic weapons in the Manhattan Project. The physicists later set up the Clock in 1947 after their atomic bombs hit Hiroshima and Nagasaki at the end of World War II (pictured) 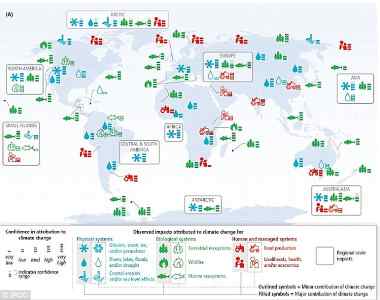 Climate threats: It is not known whether tomorrow’s announcement will specifically relate to the threat posed by nuclear weapons, or other trends, such as climate change. This graphic from last year’s Intergovernmental Panel on Climate Change (IPCC) report shows observed examples of climate change worldwide

The decision to move the minute hand of the Doomsday Clock is made by the Bulletin’s Board of Directors in consultation with its Board of Sponsors, which includes 18 Nobel Laureates.

The Clock has become a universally recognised indicator of the world’s vulnerability to catastrophe from nuclear weapons, climate change, and emerging technologies in life sciences.

Since it was set up, the hand on the clock has moved 18 times, and each move represents how the scientists view the world’s chances of survival in the face of these threats. 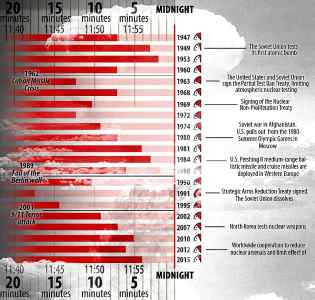 THE DOOMSDAY CLOCK: TIMELINE OF HUMANITY’S DANCE WITH DISASTER

When the hand was moved to five minutes to midnight in 2012, the BAS said it believed the world had entered a ‘second nuclear age’.

The first nuclear age ended with the signing of the Strategic Arms Reduction Treaty in 1991 by the US and Russia.

However, according to the BAS, both countries have more than 26,000 nuclear weapons combined, that could be launched at a moment’s notice.

At the time, the BAS criticised nuclear watchdogs around the world for failing to take a stand on these weapons and national policies. 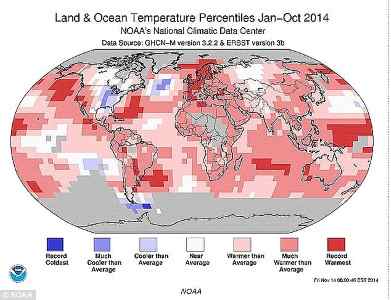 Soaring global temperatures: Noaa’s data revealed that 2014 was the hottest year since records began. This map is made up of provisional data from 2014 up to October. Temperatures across the world averaged 0.8°C (1.4°F) above 20th century averages – making 2014 the warmest year in records dating back 134 years 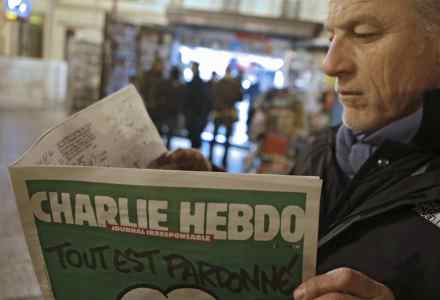 Food shortages are expected to get worse

Some studies now point to dramatic declines in some crops over the next 50 years – especially wheat and corn.

Violent conflict may be triggered as a result

Climate change will complicate and worsen existing global security problems, such as civil wars, strife between nations and refugees.

Fights over resources, like water and energy, hunger and extreme weather will all go into the mix to destabilise the world.

Gap between the rich and poor to widen

Poor people are going to bear an unfair burden of climate change, the report said.

Climate change is going to exacerbate existing inequalities, and it is going to make it harder for people to fight their way out of poverty.

It is not known whether tomorrow’s announcement will specifically relate to the threat posed by nuclear weapons, or other trends.

During 2014, for example, the Intergovernmental Panel on Climate Change (IPCC) report said there was evidence of accelerating climate change, and criticised the world’s efforts to curb greenhouse emissions.

Global temperatures last year were the highest since records began in 1880, according to US scientists.

Temperatures across the world averaged 0.8°C (1.4°F) above 20th century averages – making 2014 the warmest year in records dating back 134 years.

The Met Office had previously announced that 2014 was the hottest year for the UK in records dating back to 1910.

The modernisation is expected to cost almost $1 trillion, according to the Centre on Nuclear Security.

Recent terrorist attacks in France, following the publication of an anti-Muslim cartoon in Charlie Hebdo, could also feature among the reasons for moving the minute hand.

There is, however, also the possibility the Clock’s hand could be moved back. 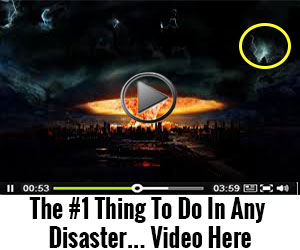