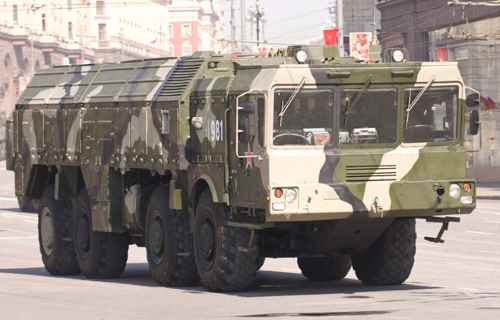 Moscow has threatened to deploy Iskander-M missiles to Kaliningrad several times over the past year, as relations between Russia and the U.S. collapsed over the crisis in Ukraine.

The Kremlin on Wednesday lashed out at U.S. plans to modernize 20 nuclear weapons stationed at a German airbase, with spokesman Dmitry Peskov characterizing the move as a potential “violation of the strategic balance in Europe,” that would demand a Russian response.

The reaction comes after German television station ZDF on Tuesday cited a Pentagon budget document saying that the U.S. Air Force would deploy modernized B61 nuclear bombs to Germany’s Buchel air force base this autumn — replacing the 20 weapons already at the site — as part of a broader nuclear modernization initiative launched by the U.S. in 2010.

“This could alter the balance of power in Europe,” Peskov told reporters at a press conference on Wednesday. “And without a doubt it would demand that Russia take necessary countermeasures to restore the strategic balance and parity.”

The U.S. nuclear weapons in question are the newest upgrade to the B61 air-dropped nuclear bomb — one of the oldest atomic weapons in the U.S. arsenal — known as the B61-12. They are deployed to bases in several NATO countries, such as Germany and Turkey.

The B61 is a variable yield nuclear device, blurring the lines between so-called tactical and strategic nuclear weapons. In other words, the power of the weapon can be adjusted for use as a small-scale battlefield nuke, or set to detonate at over 300 kilotons — true city-busting power.

Peskov did not specify what sort of reaction or countermeasures Russia might employ if the U.S. proceeds to deploy the weapons as planned, but an unidentified “military-diplomatic” source told the Interfax news agency on Wednesday that Iskander-M tactical missiles could be redeployed to Kaliningrad, a Russian exclave in Eastern Europe that borders Poland and Lithuania.

“The issue is being studied,” the source said. “The final decision will be make after a detailed analysis of the potential threats” arising from German Tornado fighter-bomber aircraft armed with modernized U.S.-made nuclear bombs.

Moscow has threatened to deploy Iskander-M missiles to Kaliningrad several times over the past year, as relations between Russia and the U.S. collapsed over the crisis in Ukraine.

Tensions over Ukraine have seen heightened nuclear rhetoric emanating from Moscow. The Iskander missile system is a short-range tactical missile capable of being armed with nuclear weapons.

Neither the Iskander nor the U.S. B61 bombs are governed by any arms control treaties, with the exception of the Nuclear Non-Proliferation Treaty, which stipulates that nuclear weapons cannot be shared with non-nuclear nations.

ZDF’s report quoted Maria Zakharova, a Russian Foreign Ministry spokesperson. In the interview given to the station, Zakharova took shots at the U.S. for not dialing back its deployments of tactical nuclear weapons following the end of the Cold War, claiming that “in the 1990s, Russia reduced its non-strategic nuclear weapons arsenal by 75 percent.”

The U.S. continues to have tactical nuclear weapons deployed in NATO countries such as Germany, Belgium, the Netherlands, Italy and Turkey, Zakharova said, adding that NATO’s policy of sharing nuclear weapons with non-nuclear members violates the Nuclear Non-Proliferation Treaty.

Responding to Zakharova’s remarks on Wednesday, U.S. Embassy spokesman Will Stevens told The Moscow Times that the deployment of U.S. nuclear weapons in NATO territory “is consistent with the Nuclear Non-Proliferation Treaty. These weapons remain under U.S. control at all times and are not transferred.”

Stevens said that the issue of nuclear weapons deployments among NATO members without nukes of their own “was fully addressed when the treaty was negotiated. In fact, the basing arrangements were made clear to all delegations and were made public. Russia did not object.”

Since Sept. 30, 1991, the U.S. has slashed its strategic nuclear weapons stockpile by over 90 percent, Stevens said, adding: “The remaining Russian weapons greatly exceed those retained by the United States.”

The U.S. is currently modernizing the B61 arsenal, with $1.2 billion allocated in the 2015 U.S. defense budget for the project. The modernization of these existing weapons is part of a broader U.S. nuclear modernization policy first outlined in the 2010 U.S. Nuclear Posture Review.

“Such plans on the part of the United States raise concern for us,” Zakharova was quoted as saying in a full transcript of her interview with ZDF, published on the Foreign Ministry’s website on Tuesday.

Russia too is pursuing a full-fledged overhaul of its nuclear forces under the leadership of President Vladimir Putin. In 2011, the government launched a sprawling 20 trillion ruble ($300 billion at current exchange rates) program to rearm Russia’s military.

The program aims to replace every nuclear weapon in Russia’s arsenal by 2020, and is focusing on new ICBMs designed to overwhelm current and prospective U.S. anti-ballistic missile defenses, adding to nuclear tensions between the two nuclear superpowers.

RELATED : Coup in U S Army Has Overthrown Obama! Double Secret -Obama Has Been Prepping for Martial Law!

Material from Reuters was used in this report.

An earlier version of this story incorrectly referred to U.S. Embassy spokesman Will Stevens as “Williams” after the first mention. The story has been updated with his correct last name, Stevens. It also incorrectly said the maximum yield of the B61 nuclear bomb was over 300 megatons. Its true yield is over 300 kilotons.