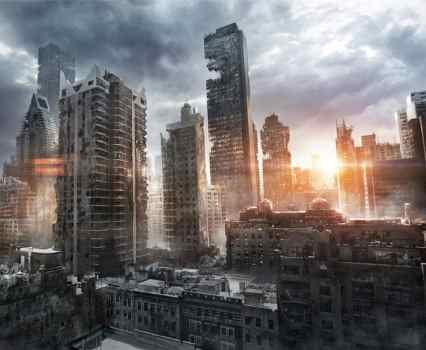 Stock market crashes in one day. whats going on with China? People are panicking and what can we do? Was this predicted? Is this the road to doomsday?

If you don’t think economic collapse is coming and coming soon. When economic collapse finally hits, and it will, more than 50 percent of Americans will be completely wiped out in just a few weeks. And then what do you think will happen.

An economic collapse today would be far different from the Great Depression. This one will be uniquely dangerous and likely violent. The morals and conditioning of people today are far far different from 80 years ago. Back then a great percentage of people knew how to take care of themselves. There were LOTS of farmers (for example). Not today though. Today we have a huge dependent class, and we have a failing middle class who are very over-extended. Today we have a vast system of ‘just in time’ production and delivery which nearly all people alive in the modern world depend upon for their existence. All of this only works in an economy that has not collapsed. When it does (collapse), there will be great displacement.

The title, “Will YOU Become Homeless After The Economic Collapse”, is meant to be a wake up call to evaluate your own economic and financial situation. If you believe that you would be at risk to becoming homeless, you might want to consider mitigating that risk somehow. Perhaps shed some of your expenses or consider a lifestyle change of less consumption (of non-necessary goods and services for example). Find a way (somehow) to build a cushion of emergency cash. The point is – to at least think about it – which is the first step prior to a plan and action…

So what are the 5 signs we are heading for economic collapse or economic doomsday like the world has never seen?

RELATED : After The Collapse Six Likely Events That Will Follow An Economic Crash

1. Almost one quarter of all Americans have amassed more credit card debt than they have in emergency savings. That means when massive layoffs start happening, people will only have a few weeks of savings before they are wiped out and won’t even be able to afford groceries. And they will still have to pay their credit cards, all the while draining their almost non existent savings.

2. A full 62 percent of Americans are living paycheck to paycheck and when they lose their jobs, they can’t buy groceries, they can’t pay their bills, they can’t put gas in their cars and so on. Only 38% percent of people surveyed can cover a $500 repair bill, much less keep things going for even a couple of weeks with no pay.

3. Stocks are facing an absolutely monumental crash – Corporate debt is back to 2007 PEAK levels. Margin debt which is money borrowed to buy stocks is at 2007 PEAK levels. China’s GDP numbers are a total fiction. China’s rail freight volume is at a 24 year low. We are in a global economy that when investors see the full impact and the market starts to slide, it will be a huge sinkhole of wealth destruction.

4. The Economic disaster Greece is facing – How Greece has managed to hold on without total collapse is anyone guess, but there is a looming disaster just waiting to happen in Europe over Greece. They can’t pay their bills and have agreed to a 4 month extension of loan guarantees from the European Union while on the other hand their new Socialist government under Price Minister Alexis Tsipras has already said he will not pay Greek debt to the EU, but the EU just loaned him even more money.

A protest group called ANTARSYA has called for defaulting on Greece’s debt, and nationalization without compensation of major industries, banning of lay-offs, the disarmament of the police, full political and social rights for immigrants. Sure, please tell us what fantasy land that can happen in. Nothing like good old Socialism with no means of financial support to ruin an economy.

Of course it gets worse, you didn’t think we were done yet, did you?

This is a good one and just what you’ve been waiting for. Get this…

5. The US Treasury is spending billions of dollars they won’t even account to Congress for. It’s hard to believe we have come to the point in this country where Congress asks the United States Treasury to account for 3 billion in Obamacare payments and they flat out tell Congress, NO!

Astoundingly Rep Paul Ryan has asked the treasury to explain why $3 billion in payments were made to health insurers even though Congress never authorized the spending through annual appropriations and the Treasury Department told him flat out, they would not comply.

RELATED : 22 Items That Vanish From Stores In An Economic Collapse or Natural Disaster

If the treasury under the Obama administration cannot and will not account for this kind of money, $3 Billion, what else are they up to at the orders of Barack Hussein Obama?

There you go, economic collapse is looming and our government from the Congress to the Treasury, to the Federal Reserve to President Obama knows it and it is as if they want it to happen because no one is doing anything about it.

James Dale Davidson lays out the truth about the American normalcy bias , and the coming economic disaster .

5 thoughts on “Last Warnings America false flag end of 2016 then dollar collapse will follow 100% it will happen.”