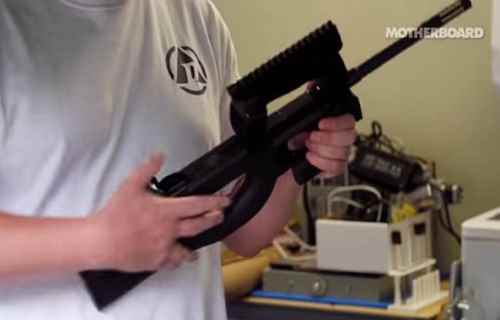 While all eyes were on Pittsburgh-based biotechnology startup Grindhouse Wetware, biohacker Amal Graafstra was quietly building the world’s first implant-activated smart gun inside his Washington garage.

Graafstra, who’s been active in the DIY bodyhacking scene since the mid-2000s, recently granted Motherboard an exclusive look at the prototype inside the garage headquarters of Dangerous Things, a biohacking company he’s run out of his home since 2013.

Amal Graafstra wants to make guns safer so that accidental fires can be averted. For this, he has developed a gun whose trigger is activated by a RFID implant in the hand. The magic gun that can be triggered by an owner’s touch was recently demonstrated to Motherboard by Graafstra at his garage in Seatle, Washington.

There has been fair evidence of RFID chips used on wristbands and rings, which can activate a smart gun. But this is for the first time a gun is being activated using an implant.

Taking about the significance of his concept, Graafstra said,

I think the smart gun concept is important, because eventually we’d be able to control who’s able to operate the weapon once it leaves the store.

The gun developed by Graafstra is designed from an ordinary gun, but it’s pretty safe in its own right. The RFID chip is implanted between the index finger and the thumb, when the owner lifts the weapon, the implant unlocks the gun. The gun would not activate without the owner’s touch.

Some of us may deem such innovations unreliable for emergency; nonetheless, some accidental fires could be averted by a gun that is unlocked only by the owner. Moreover, this is full proof and should not fail in case of emergency unlike bracelets and rings that can lose connection.

Protecting Yourself from the “Knockout Game”