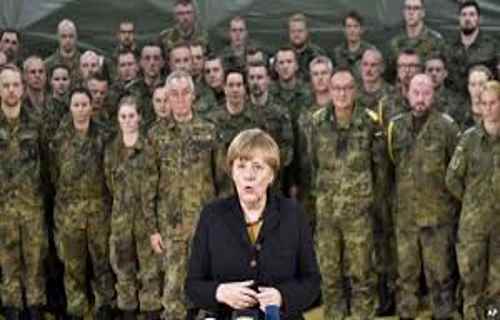 According to a report issued  in German Economic News (Deutsche Wirtschafts Nachrichten, or DWN), the German government is preparing to go to war against Russia, and has in draft-form a Bundeswehr report declaring Russia to be an enemy nation. DWN says: “The Russian secret services have apparently thoroughly studied the paper. In advance of the paper’s publication, a harsh note of protest has been sent to Berlin: The head of the Foreign Affairs Committee of the Russian State Duma, Alexei Puschkow, has posted the Twitter message: ‘The decision of the German government declaring Russia to be an enemy shows Merkel’s subservience to the Obama administration.’”

“Many people will have missed this story last week, buried under a number of other major international headlines. Details of new government-directed ‘Civil Defense’ measures were leaked to the German press. Western Europe has not seen such news since the height of the Cold War, some half a century ago. Is Berlin just being extra careful, or is there more to this story?

It’s important to note here, that this story does not emanate from the prepper-alt-media-complex, or the lunatic fringe per say – this was a mainstream story, broadcast across many international media outlets…

The London Telegraph reported early on that Angela Merkel’s government was set to discuss these new emergency preparedness measures last Wednesday at a cabinet meeting. Plans included notifying all German citizens, “to stockpile food and water in case of an attack or catastrophe for the first time since the end of the Cold War,” and that somehow it would be necessary to “prepare for the worst.”

The Telegraph also added other details which allude to biological warfare:

“The authorities are to boost stocks of smallpox vaccine and antibiotics in case of biological attack, and set up reserves of petrol and oil at 140 locations around the country to ensure a supply for 90 days.”

Officially speaking, these proposals have not yet been made public yet.

Last week, Global Research also reported on the fall-out from this story:

“Many have responded with a mixture of surprise, shock and horror to the “Civil Defence Concept” (KZV) officially presented by German Interior Minister Thomas de Maizière on Wednesday. Extending over 69 pages, it details a series of measures to prepare the population for a war.”

“How to be protected against attacks using biological or chemical weapons? How will the population be taken to safety if a radioactive cloud spreads? Where will the federal government hide if an attack is threatened? Where will cultural treasures be stored in the case of war? How can men and women be made to report for work in ‘sectors vital to life and defence?’” 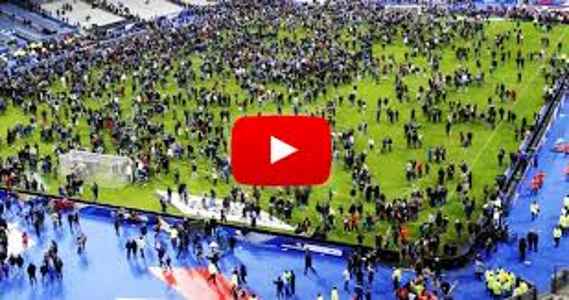 “The “Civil Defence Concept” appeared in parallel with the “White Paper 2016 on Security Policy and the Future of the German Army,” which proposed a major strengthening of the military. Whoever thought this meant only an expansion of military deployments abroad can now clearly see that the German government is preparing for wars that will transform Germany and Europe into a battlefield—and within the foreseeable future. The “Civil Defence Concept” calls on the population to establish a personal store of water and food to last ten days. It recommends that a first aid kit, warm blankets, coal, wood, candles, torches, batteries, matches, charged batteries and cash reserves be kept at the ready.” 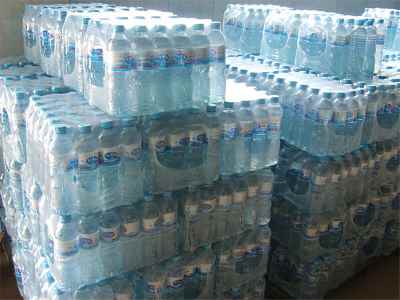 Further measures to prepare for a “state of defence” include the “strengthening of building materials” for public and private buildings; the establishment of a “dependable alarm system” via radio, TV, sirens, loudspeakers, text messages and the Internet; and the creation of hospital “decontamination stations” in case of nuclear, biological or chemical attack.”

“The document declares it necessary to consider the reintroduction of compulsory military service and the implementation of a secure method for the call-up and mobilization of military personnel. It argues that the Federal Labour Agency should have the power to compel men and women to work in “sectors vital to life and defence.”

Unfortunately, the reason why this U.S coup in Ukraine has still not been reported in the West, is that to make it public to Westerners would jeopardize not only the Western economic sanctions against Russia after Russia accepted the overwhelming decision by Crimeans to separate from the post-coup Ukrainian government, but would also jeopardize the preparations by all of NATO to go to war against Russia: both the sanctions and the invasion would have no basis and no support among Western publics. All of that (the sanctions, and now the pouring of troops and weapons onto and near Russia’s borders for a possible invasion of Russia) would no longer be at all palatable by Western publics, if this history — that it all began by a violent U.S. coup in Ukraine — were to become known before the U.S. and NATO invasion occurs. So it all remains, instead, suppressed in the ‘democratic’ West.

So: please email this article’s URL address (which is immediately above this article), to friends, so as to spread to them the word, that NATO is preparing an invasion of Russia. There’s no way that the ‘news’ media they see are likely to tell them (until it’s already too late).

From Russia, to Germany, to America countries all across the globe are receiving warnings from those in places of power to prepare for disaster. For the past few years  world governments and globalists have been stocking food, water, ammo, and the like. Some have even moved and purchased bunkers in countries like New Zealand.

The fact is, if they are preparing for something and the governments are warning their citizens to prepare for something, then shouldn’t we actually be preparing?

“One of the things that we have learned over the course of the last seven and a half years is that government plays a vital role, but it is every citizen’s responsibility to be prepared for a disaster. And that means taking proactive steps, like having an evacuation plan, having a fully stocked disaster supply kit.  If your local authorities ask you to evacuate, you have to do it. Don’t wait.”